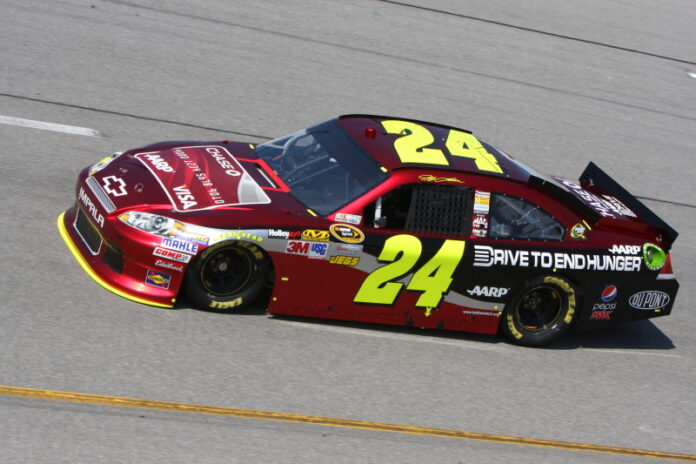 [/media-credit]One of the most successful cause-related NASCAR sponsorships to date, AARP’s Drive to End Hunger with four-time champion Jeff Gordon, has been extended.

The AARP Foundation announced that its partnership with Hendrick Motorsports will be extended for yet another year, taking the 22-race co-primary sponsorship of the Jeff Gordon No. 24 Chevrolet through 2014.

“We are excited to build on the great work of these last two years to help the nearly nine million older Americans who face the threat of hunger,” Jo Ann Jenkins said. “With Jeff Gordon and Rick Hendrick, we have committed champions behind the wheel on and off the track.”

“Of course none of this work is possible without the compassion of the NASCAR fans.”

The commitment of the fans was evident as recently as the past race in Dover, Delaware where NASCAR fans, who packed over 400 meal boxes for needy seniors, were treated to a meet and greet with Jeff Gordon prior to the race, thanks to AARP and Chase Card Services.

Jenkins acknowledged that awareness from events like this and others over the past two years was another major reason for AARP to extend the Drive to End Hunger sponsorship.

In fact, the Foundation estimates that it has now reached over 1 billion people, which is more than ever expected when the partnership began in 2010. Through this outreach, thousands have been enrolled in the SNAP, Supplemental Nutrition Assistance Program.

The unique partnership between AARP and Jeff Gordon has also recruited and engaged over 30,000 volunteers helping to call awareness and raise funds for seniors in need.

The driver of the No. 24 Drive to End Hunger Chevrolet could not be more pleased with the sponsorship extension, particularly because he is so passionate about the cause.

“It has been an honor and a pleasure to be part of Driver to End Hunger these last two seasons,” Jeff Gordon said. “I’m excited to keep pushing in the fight against older adult hunger.”

“Going around the country – especially during race weeks – I have been constantly reminded about the generosity of NASCAR fans,” Gordon continued. “I got to see race fans reaching for their wallets, packing meals for local food banks, and texting donations to help millions of older Americans who face the threat of hunger every day.”

“I can’t wait to see what we can do the next two years.”

In addition to the driver of the No. 24 Drive to End Hunger, team owner Rick Hendrick, known for his own many charitable endeavors, was also most pleased with the sponsorship extension.

“Drive to End Hunger has raised the awareness of an important issue and helped many in need,” Mr. H said. “When the program kicked off, we felt success would ultimately be measured by the number of people the program touched and positively impacted.”

“It’s been truly gratifying to see that success,” Mr. Hendrick continued. “We’re excited about extending the relationship and continuing the work we’ve started with AARP and the AARP Foundation.

The extension of the Drive to End Hunger campaign will feature primary paint schemes in 22 Sprint Cup races annually through the 2014 season. This will continue NASCAR’s first ever cause-related partnership, which began in 2011.

For more information about the Drive to End Hunger campaign, visit .