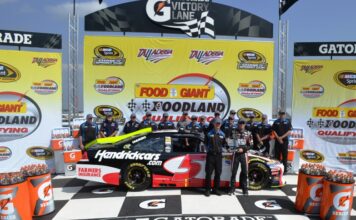 [/media-credit]Hendrick Motorsports driver, Kasey Kahne turns the fast lap of 191.455 mph, to edge out Stewart-Haas Racing (SHR) driver Ryan Newman by only .061 sec. to score the pole for Sunday’s Good Sam Roadside Assistance 500. This was Kahne’s third pole of the season.

“It was a great way to start the weekend. We had a good car yesterday in practice, felt good in the draft, felt good around Jeff Gordon, we were pushing each other and stuff. Things are good so far. It would be great to start first; I have never qualified first at one of these tracks.” Kahne said just after turning the lap.

This is the 32-year-old driver’s first career pole award at Talladega Superspeedway and first at any restrictor plate track.

“It’s my first pole at this track and at this type of a race track so it feels pretty good. We have tried for a long time to win one here and this shows how awesome that car is thanks to Hendrickcars.com and Chevrolet and everybody at Hendrick Motorsports we have some fast cars this weekend.” Kahne said.

Kahne comes into the race sixth in points, 32 points behind leader Brad Keselowski who will start 22nd on Sunday.

“I’m blown away, shocked that we were top-three. Very, very proud of (Brian) Pattie (crew chief) and everybody on our 5-hour ENERGY Toyota with the support of the Avon Foundation and everything we’ve got going on. We haven’t been qualifying very good on these restrictor-plate tracks and today it caught me off guard.” Bowyer said of his qualifying run.

“It was a solid lap and effort. This team always does such an amazing job in coming to the restrictor plate tracks. Obviously, being on the pole last time we were here we were hoping to be there again, but this late draw and the wind you just can’t ever tell what is going to happen. We didn’t get the pole, but it’s still up there where we need to be.” Gordon said.

Travis Kvapil, who led the first practice session and one of only two drivers to break the 200 mph mark, will start 36th. A team member confirmed that the No.93 BK Racing Burger King car wasn’t good by itself, but runs well in the draft.

Roger Holtsclawhttp://www.nationalmotorsportsnetwork.com
Roger has over 24 years experience as a mechanic and crew member in NASCAR at many levels including Cup, Nationwide and Truck Series. He has also competed as a driver at many short tracks around the Southeast including one start the USAR Hooter's Pro Cup Series. Roger is now embarking on a motorsports journalism and photography career and is co-owner of HMP Photo. Follow me on Twitter @rogerholtsclaw Email me: roger@speedwaymedia.com
Previous articleToyota NSCS Talladega Post-Qualifying Notes & Quotes
Next articleCHEVY NSCS AT TALLADEGA TWO: Kahne and Newman Post Qual. Press Conf. Transcripts