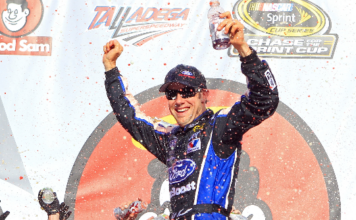 [/media-credit]With Chase race four at Talladega delivering on its reputation as the ‘wild card’ and ‘game changer’ in the championship battle, here is what else was surprising and not surprising from the 44th running of the Good Sam Roadside Assistance 500.

Surprising:  Manhandling a very free race car and making a miracle save or two did not prevent this driver from being the loneliest, but no doubt happiest, man at Talladega Super Speedway. Matt Kenseth survived the last lap ‘big one’ to score his first ever win at the track.

Kenseth, in a very pink No. 17 Ford EcoBoost/National Breast Cancer Foundation Ford, notched his 23rd victory in 466 Cup races. This was his second win and 17th top-10 finish for the 2012 season.

Kenseth’s spotter Mike Calinoff described his driver’s lonely but lucky status best with his radio call on the final lap of the race.

“They’re wrecking behind you,” Calinoff said. “The whole field is wrecking.”

“There isn’t anyone who isn’t wrecked.”

“I looked behind me and saw nothing,” Kenseth said, echoing his spotter’s words. “Being in front of it all was the best place to be.”

Not Surprising:  Although making the Chase, albeit barely, and admittedly not having the best of racing luck with him for much of the season, this driver was thrilled that things finally went his way at unpredictable ‘Dega.

“For a change, I finally came out on the good side of it,” Jeff Gordon, who finished second in his No. 24 Drive to End Hunger Chevrolet, said. “I really have no idea how we all made it to the white flag because it was three, four wide.”

“I got hit by the No. 18 and somehow that turned me down on the apron and I just put it back to the floor and drove by every car.”

Surprising:  It was a surprisingly humble and contrite Tony Stewart that greeted the media after causing the twenty-four car pileup and flipping end over end in his own No. 14 Mobil 1/Office Depot Chevrolet amidst the melee.

“I just screwed up,” Smoke said. “I turned down across, I think it was Michael (Waltrip) and crashed the whole field.”

Not Surprising:  Not surprisingly, the theme for the day for the point’s leader Brad Keselowski was simple. He just wanted to survive Talladega and come out intact on the other end.

Keselowski, in his now familiar Blue Deuce, did indeed survive, finishing seventh in spite of being caught in the pile up. He now has a 14 points advantage over second place Chase contender Jimmie Johnson.

“We were four-wide for about two and a half straight laps and it was just a matter of time before you are wrecked,” Keselowski said. “It happens but that’s just Talladega.”

Keselowski was so happy to have survived that he tweeted the following entrepreneurial thought after the race.

“Someone needs to make a t-shirt that says, “I survived Talladega,” @keselowski said. “Guaranteed at least 43 customers.”

Surprising:  NASCAR’s biggest loser at Talladega was surprisingly one of Dega’s darlings, as well as fan favorite Dale Earnhardt, Jr.  The driver of the No. 88 Diet Mountain Dew Paint 88/National Guard Chevrolet finished a disappointing 20th, dropping four positions in the Chase standings to 11th, all as a result of the ‘big one.’

And even more surprising, NASCAR’s most popular driver had some pretty harsh words to share after the race, particularly for the style of racing at Talladega and the longevity of the sport in light of it.

“Yeah, I took a lot of hard shots,” Junior said. “If this is what we did every week, I wouldn’t be doing it.”

“I would find another job.”

“The way we are going ain’t the right direction,” Dale Earnhardt, Jr. said. “I don’t care what anybody says for the good of the sport; I mean it’s good for the here and now and it will get people talking today, but for the long run that is not going to help the sport the way that race ended and the way the racing is.”

“It’s not going to be productive for years to come.”

Not Surprising:   With over half the field involved in the last lap crash, it was not surprising that several drivers, including some of the Chase contenders, were a bit confused as to where exactly they finished. There was so much confusion that crew chiefs gathered around the NASCAR hauler to see indeed where their driver ended up officially.

“Everybody just merged together and we were all in a big wad at that point,” Jimmie Johnson, piloting the No. 48 Lowe’s Chevrolet, said. “Fortunately my car I could still drive to the finish so I passed a couple of guys that were sitting there on the bottom trying to get going themselves.”

Teammate Kasey Kahne, in the No. 5 Hendrickcars.com Chevrolet, also was a bit confused as to his finishing spot.

“You are kind of along for the ride once it starts,” Kahne said. “We ended up making it back to the line; a few cars passed us so we might be a little better than 13th.

Finally, Richard Petty Motorsports driver Marcos Ambrose, piloting the No. 9 DeWalt Ford, was confused but willing to forget about it in the end.

“We had a strong day,” Ambrose said. “I thought I missed the wreck but at least I didn’t cause it.”

“I have no idea where I finished, but we’ll just go on to the next one and forget about this.”

Johnson did indeed finish 17th as he predicted, Kahne finished 12th, a bit better than he thought, and Ambrose ended up in 27th, a finish he most likely will want to forget.

Surprising:  Kyle Busch became a surprisingly ‘lucky dog’ at Talladega. The driver of the No. 18 M&M’s Toyota was not only the official ‘lucky dog’, getting his lap back after a speeding penalty, but was also a ‘lucky dog’ in navigating his way through the major 24 car pile up to finish third.

“Our day was pretty good,” Busch said. “I got busted for speeding, so that was my fault and we had to battle through that.”

“That was probably one of the most tense parts of the race for me was having to race for the ‘lucky dog’ to get back on the lead lap.”

“But all in all, our guys had some good pit stops and we gained some spots,” Busch continued. “I’m just glad and thankful that I was able to get through with no damage and make it through unscathed.”

Not Surprising: The two drivers who will apparently swap their rides for the next race, with Kurt Busch going to the No. 78 Furniture Row Racing team and Regan Smith taking over the No. 51 Phoenix Racing Chevrolet, had polar opposite finishes to their last race in their former rides.

Regan Smith ended his tenure at Furniture Row with a 5th place finish, his best ever at a restrictor plate track, while Kurt Busch finished 39th after being parked by NASCAR for not heeding their command to stop his race car after his wreck.

“This is the way my life works,” Kurt Busch said. “I am leading, I wreck, I run out of gas and now I’m in trouble.”

“This year has been a great year to test me in every way.”

“What a wild ending,” Smith said. “We restarted the green-white checkered in 28th, picked up a bunch of spots on the first lap and then came the wreck.”

“Somehow I was able to drive it to the checkered flag with a fifth-place finish.”

Surprising:  Rather than having a ‘Talladega Nights’ flashback, Greg Biffle was having another movie moment instead.

“It was like Days of Thunder, coming through the smoke and the grass,” the driver of the No. 16 3M Ford Fusion said. “A car flew over the top of my car as I turned to the bottom and missed guys by three inches.”

“It was the craziest thing I’ve ever been involved in in my life.”

Biffle had his own crazy moment in the race, making an amazing save after being turned sideways in the draft. He finished the race in sixth, gaining two positions in the point standings to ninth.

Not Surprising:  The difficult season for Earnhardt Ganassi Racing continued in agonizing style at Talladega for both of their drivers. Jamie McMurray, former Daytona 500 winner and driver of the No. 1 Bass Pro Shops/Allstate Chevrolet, finished 34th after leading 38 laps of the race.

Teammate Juan Pablo Montoya finished 38th in his No. 42 Target/Gillette Chevrolet after an engine failure on lap 156.

“We were running right up there in the lead pack the majority of the day and then something happened to the motor,” JPM said. “The car started smoking and I felt like it was going to let go at any minute.”

“We just can’t catch a break.”

“The Bass Pro Shops Chevy ran great all day,” McMurray said. “It was great to get back up there and lead some laps.”

“I wish the outcome had turned out differently,” McMurray continued. “The guys did a great job and I felt like we had the car to beat.”