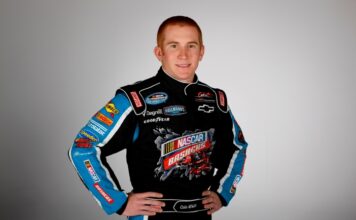 [/media-credit]JR Motorsports young gun Cole Whitt is all set to do some NASCAR bashing at his upcoming Nationwide race at Texas Motor Speedway.

In fact, the up and coming young gun will be behind the wheel of the No. 88 NASCAR Bashers car, promoting a new race car toy made by Spin Master that wrecks, transforms and then is reassembled to do it all over again.

“It is an awesome opportunity for me and JR Motorsports to be teamed up with NASCAR Bashers for Texas,” Whitt said. “We already had the Atlanta race with them and ran really well.”

“That’s always fun when you run good with your sponsor.”

While Whitt may be pleased to run well with NASCAR Bashers on the hood, he is most excited about the toy itself. And being a ‘big kid’, he has already had the opportunity to play.

“It’s a really cool toy,” Whitt said of the NASCAR Basher, which is styled like an actual NASCAR race car that actually transforms after wrecking. “I went to an autograph signing at Walmart and they had them on the table, so I got to play with them.”

“They kept me entertained.”

Whitt acknowledged that the coolest part of the NASCAR Bashers is that there are not only countless ways to wreck them, but, just like his own NASCAR pit crew does for him, the cars can be rebuilt and readied to race once again.

“I think what’s cool about it is the kids can beat and bang on them,” Whitt said. “That’s part of our sport and that makes it exciting and why people watch.”

“Our cars are always on edge and when we crash, we may be out of the race,” Whitt continued. “But with NASCAR Bashers, the kids can play with them and crash them and they just break apart.”

“But then they can snap them all back together and keep playing with them,” Whitt said. “I wish our race cars were that easy to put back together.”

“That’s what makes it exciting for the kids.”

Whitt admitted that he wished that he had toys like NASCAR Bashers, instead of having to do his own crash improvisations.

“I didn’t get to have anything as cool as NASCAR Bashers when I was a kid,” Whitt said. “I had to take a hammer to my race cars and I’d just beat them up and make them look like they were all crashed up.”

“My cars were done after that though,” Whitt continued. “At least with NASCAR Bashers you can put them back together and keep playing.”

There was one other feature of NASCAR Bashers that really appealed to Whitt. And that was the important ability to attract a younger audience to the sport.

“It’s pretty exciting for us to get kids excited about the sport.”

“I’m just an average kid that came up through the sport and JR Motorsports gave me this awesome opportunity,” Whitt said. “NASCAR’s really always focused on trying to find that next generation of fans and we finally have some young kids coming up in the sport and kids can relate.”

“That’s what the Nationwide Series is all about with young kids trying to make a name for themselves and trying to win races with the bigger names.”

NASCAR Basher’s maker, Spin Master, could not agree more with their young driver.

“Spin Master wants to engage young fans with great products and unique means to reach them,” Craig Drobis, Marketing Director for Spin Master, said. “The NASCAR Bashers product and partnering with a young rising star like Cole does that.”

At the O’Reilly Auto Parts Challenge in Texas, Whitt will not only run the NASCAR Bashers car but will also show off the new toys on his hero card and at autograph signings throughout the race weekend. And Whitt will have a special honor, that of serving as ESPN’s in-race reporter.

As pleased as Whitt is about driving the NASCAR Bashers car, he is also thrilled to finish off the season on a high note from a performance perspective, especially after a bit of an up and down year.

“This year’s been a little bit of a roller coaster,” Whitt said. “You’ve got to race and learn by your mistakes.”

“So far, it’s been a good year and we’re starting to really hit our stride and run consistently lately,” Whitt continued. “There were a lot of changes throughout the season with JR Motorsports, all in the direction of making the team better.”

“And I think we really have been improving.”

Even with NASCAR Bashers on the hood at Texas and a strong run in the final races, Whitt is still unsure, however, of his future in the new year. He is hoping that he remains a part of JR Motorsports, especially with the recent signing of Regan Smith to the team.

“So far, I’m not exactly sure what 2013 holds for me but we’re looking at it as we’re going into 2013 with JR Motorsports and we’re hoping to find a little more funding,” Whitt said. “We want to go for that championship.”

“Hopefully our deal comes together and I find a little more sponsorship because I think we could really give it a run for the money,” Whitt said. “Plus Regan would be a great teammate I could learn from.”

“I just hope we get that opportunity.”

But until that time, Whitt will simply focus instead on doing some NASCAR bashing at Texas Motor Speedway.

“I just think NASCAR Bashers are plain awesome,” Whitt said. “I always crashed my cars when I was a kid.”

“So being able to put them back together is really, really awesome.”

NASCAR Bashers are available at Walmart, Target, ToysRus, NASCAR.com and at official NASCAR Trackside Merchandise trailers at track. They are designed for children ages 5 and up and are reasonably priced at $9.99 for the NASCAR Basher race car, with additional accessories available.