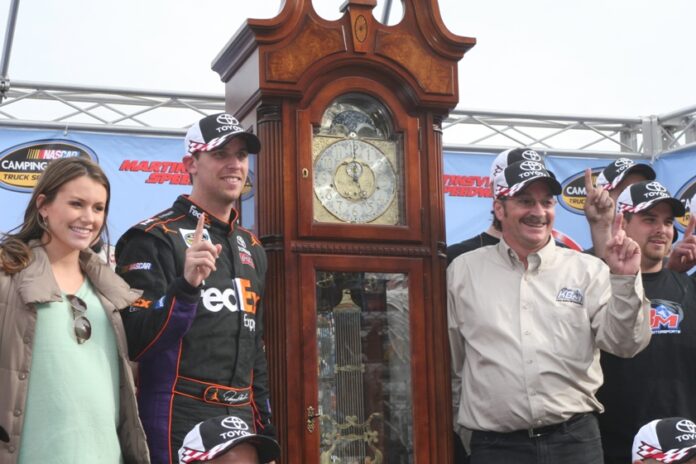 [/media-credit]Virginia native Denny Hamlin takes the checkered flag after driving from the rear of the field. Hamlin qualified fifth, but missed the drivers meeting which was taking place after the start of NASCAR Sprint Cup Series (NSCS) practice. Hamlin stated in the media center after the race that he hated to miss it and cause the team to start at the back, but his first priority is the NSCS.

Hamlin was second with nine laps to go, with only leader Matt Crafton starting inside him. Crafton quickly jumped out front into turn one, Hamlin dropped in behind him and headed off to turn three. When entering three Crafton washed up slightly and Hamlin took advantage. Hamlin got into the rear of Crafton and pushed him up the track. After assuming the lead, Hamlin had no challengers. Crafton got caught on the outside line and fell to fourth after leading 33 laps.

“I love this place and, man, that’s short track racing at its finest. I gave the 88 (Matt Crafton) extra room on the outside. I went to the second lane and didn’t want to crowd him into (turn) one and tried to pass him on the outside and he shoved up into me and pushed me into the third groove. I just got back to him, so I didn’t wreck him or anything like that, you’re going have contact at Martinsville.” Hamlin said.

After the race Crafton was upset with Hamlin. He made his way down pit road to victory lane where he caught Hamlin still in his truck. Crafton stuck his head inside the No.51 truck and angrily pointed his finger in Hamlin’s face. I spoke with Crafton after the incident asking about the pass and the conversation, “Just got moved, that’s all there is to it. I mean it don’t take a whole lot of talent to run into the back of you, he’s a great race car driver but at least try to race me for a lap or two before you just run half a lap and run into the back me and drive through me.” As far as the conversation in the truck, “I told him what goes around comes around, he’ll race another truck race and he’ll remember what it feels like.”

Nelson Piquet Jr and Joey Coulter battled hard for second place beating and banging down the backstretch with Piquet coming out on top. Coulter had to settle for third. Regarding short track racing, Piquet commented, “..there is a learning curve around here and I am starting get better at it.” “The more I do it , the more I like it.”

The points standings also had a big shake up at Martinsville. Ty Dillon appeared to be in very good shape, running solidly in the top ten with second place James Buescher having problems and going a lap down early. Dillon had the opportunity to expand his points lead to a much more comfortable margin. The RCR driver’s fortune took a turn for the worse on lap 151, blowing a tire due to a melted bead, and tagging the wall in turn one. To make matters worse a broken sway bar joint would cause the No.3 to go 6 laps down and finish a dismal 28th place.

Buescher on the other hand got the free pass to get back on the lead lap and after a pit stop improved the truck dramatically. Buescher drove his No.31 Great Clips Chevy to a solid sixth place finish. He will leave Martinsville with a 21 point lead over Dillon and a 25 point lead over Peters with three races to go.