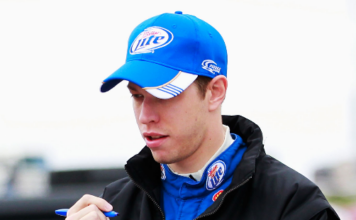 [/media-credit]The question that most Sprint Cup fans are asking doesn’t have any good answer. Can Keselowski catch him? Immediately one can look at the seven point deficit and notice that finishing four places above Jimmie Johnson in two races, not considering the bonus points for leading laps, is a monumental task. Is it possible? Yes. Is it plausible? Not likely.

When NASCAR decided to come up with the playoff system that we now know as the Chase, they didn’t change much about the final ten races, which was supposed to be the playoff. In the beginning it began with New Hampshire and ended at NASCAR’s owned track at Homestead, Florida. It didn’t work out, but they added Chicagoland, just another mile and a half that the Lowe’s team thrives at, and nothing changed. In fact, it made more of an advantage for the No. 48 team. So it plays out this year like all the rest of the past seven years. Game over.

This is not an indictment of Jimmie Johnson, the Lowe’s team for Hendrick Motorsports. They know the program and base their season on the last ten races. They may lag behind in the first 26 races (when Greg Biffle and Matt Kenseth seemed to be at the top most of the season), but they are prepared for the final ten races where they shine. It’s a good strategy. Play by the rules, which might be an outrageous statement when considering the No. 48 team, is how you win. When you go to the same tracks at the end of the season in your playoff you get what you deserve—a boring finish.

Last year was different. You had Carl Edwards and Tony Stewart fighting it out. Edwards took the lead and fought hard during the “playoffs,” but tied Stewart with the championship coming down to the number of wins. This year it is different. Despite Keselowski’s valiant and sometimes inhuman effort using pit strategy and banking on luck, it seems to come down to skill versus desire. Skill usually wins in these cases, and that will be the decisive factor this year. Keselowski’s somewhat inexperience combined with the experience of Rick Hendrick’s team will prevail as usual. I don’t see any way that the Johnson freight train will derail. And that makes a very important point. After Phoenix, how many will tune in or attend for the final Ford Championship weekend at Homestead? I fear the worst.

The whole point of the Chase format was that it would create excitement for the end of the season and create a so-called horse race. Unfortunately, while it worked in 2011, it isn’t working this year, and probably won’t in most years. Racing is so different than stick and ball sports. Trying to emulate the playoff system in those sports is futile. Yes, we can have a system like the NFL, the model for the Chase, was a bad attempt at creating excitement, but it never takes into account the fact that the NFL, the NBA, or even MLB, have no advantage or certain tracks. They get to be home and away, with the advantage going to the home team. In the NASCAR world, the home advantage clearly exists with one team. Until the final ten races are changed, you can expect the same result forever and ever. Don’t forget that 2011 was an aberration. The sooner that NASCAR changes the schedule, the better this end of season thing will become. Unfortunately, that’s a hard thing to do. Add Darlington and Bristol? Great idea. Get rid of New Hampshire and adding Richmond? Yes. But it highlights the real problem.

There is no reason to have a playoff in NASCAR. Run the races from one to 36. Crown a champion and place the emphasis on each race during the season and giving proper kudos to the winner. That’s the way it always was and why wasn’t that good enough today when it was what built the sport? Beats me.

Ron Fleshmanhttp://www.ris-news.com
Ron Fleshman has followed NASCAR racing since attending his first race at Martinsville Speedway in 1964. He joined the Motor Sports Forum on the CompuServe network in the 1980s and became a reporter for Racing Information Systems in 1994. In 2002, he was named NASCAR Editor for RIS when it appeared on the World Wide Web as www.motorsportsforum.com. He can now be found at www.ris-news.com. Ron is a member of the American Auto Racing Writers and Broadcasters Association. You can find Ron following and reporting on the top three NASCAR divisions each week. As a lifer in his support of racing, he attends and reports on nearly 30 events a year and as a member of the motor sports media, his passion has been racing for 47 years. He lives with his family in rural West Virginia and works in the insurance industry when not on the road to another track.
Previous articleNOTES FROM THE NASCAR NATION: A LUCAS OIL TAIL GATE PARTY IN PHOENIX
Next articleTommy Baldwin and Matthew Dillner Race for Sandy at Phoenix International Raceway