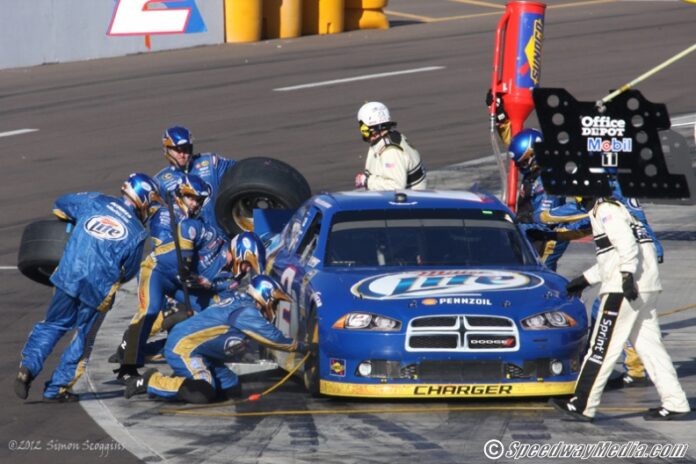 [/media-credit]Well, it is about damn time. NASCAR had a race that actually provided some television entertainment. Yes, you had to go through a few hours of round and round, but you have to admit that it was well worth the wait.

First, the race in Phoenix. This late in the season, it came down to watching if anything bad would befall one of the two leaders battling for the title. Jimmie Johnson seemed to be falling back on the track, the points about equal on the season, when his tire let go. Into the fence he went as he went from points leader to almost out of it. They got the beast back out there, but Johnson finished 32nd compared to Brad Keselowski’s 6th place result. Heading into Homestead next week, all Keselowski has to do is finish 15th or better and the crown is his.

Kyle Busch led most of the laps, yet wound up third. Kevin Harvick led the one that mattered, for his first win of the season. After it was announced this weekend that Harvick was moving on to Tony Stewart’s outfit in 2014, not much in the way of hugs were forthcoming from his present boss, Richard Childress. The driver might be Happy, but his owner sure is not, win or no win.

The highlight of the afternoon came courtesy of Jeff Gordon’s temper. His title hopes are long gone, and he made sure the suspense ended for Clint Bowyer as well. Bowyer and Gordon tangled running side by side. Jeff tried a little payback, but all he managed to do was put himself into the wall and that did not help his disposition. NASCAR black-flagged Gordon so he would get his battered vehicle off the track and in for repairs, but he had another idea. He waited for Mr. Bowyer to cruise by, clipping him to send both into the fence, collecting Aric Almirola, Joey Logano and, almost, Keselowski. Then the fun really began.

In the pits, Jeff took off his helmet while others thought of taking off somebody’s head. The two crews had a little brawl, causing the broadcast team to get more excited than they had been all day. Bowyer, parked on pit road, went sprinting to join the fray but got held up outside of Mr. Gordon’s rig. NASCAR brought the boys in for a talk, even providing security people so they could return to their abodes without being molested. The action on the track has turned into a snoozefest in recent seasons, but the beating and banging on and off the asphalt turned hardcore last Sunday.

Consistency is a big thing in NASCAR, not that you would know it from the flag stand. Harvick was leading, about to take the white flag, when Gordon and Bowyer had their set to. The caution waved right away and Harvick was denied victory. Off they went again, this time with Danica Patrick wrecking behind them. No caution this time, lots of oil, and as Harvick and runner-up Denny Hamlin went skidding through on their way to the line, others were not so successful. A lot of torn up cars were the result with Patrick, limping along to the finish, hit from behind as some in the field became pin balls.

Whatever it takes to provide entertaining, exciting, and competitive visual stimulation is a good thing, but even I think the wreck to conclude Phoenix was a bit much. Give me a race with no crashes but lots of passing and you got racing folks will tune in for. Maybe next year.

Next week it all comes to an end for 2012 as the final waltz is played at Homestead.  It will all come down to Keselowski staying out of trouble, especially if he manages to keep some air in the right front. Enjoy the week.