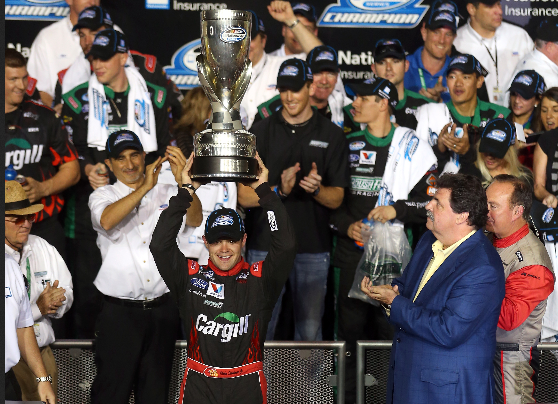 “It’s really cool to be up here and drive these racecars for Jack Roush, Ford, Roush Yates, and everyone who puts their heart and soul into this. Roush Yates Engines were just incredible tonight. It was a great two years, and we’ve had a lot of fun. We look forward to our opportunity next year.”

The second consecutive championship served as a final bow for Stenhouse and his Nationwide crew. Stenhouse, who is headed to the Roush Fenway No. 17 Ford in the Sprint Cup series next year, finished the season with an impressive six overall wins with his Roush Yates powered FR9 engine.

Jason Johnson brought Roush Yates another championship this weekend in the Lucas Oil ASCS series. Johnson went to Victory Lane on night two of the 45th annual FVP Western World Championships in Peoria, AZ to grab his 14th win of the season with his Roush Yates powered Sprint 360 engine. Johnson took time to give special thanks to his team partner Ricky Stenhouse Jr.

Jeremy Payne swept the USMTS Winter Nationals in Baytown, TX winning Thursday night, Friday night, and Saturday night, becoming the first driver in 14 years to win all three races. Payne drove his Roush Yates powered Chevy USMTS engine to his sixth win of the season and the eleventh of his USMTS career.

Roush Yates, of Mooresville, N.C., designs, engineers and crafts high performance racing engines with the power to perform and the horsepower and durability you’d expect from legendary NASCAR pioneers Jack Roush and Robert Yates. The partnership of power and precision has come from merging the knowledge and experience of two legendary engine builders, both with a passion for winning today and powering up for tomorrow. In 2009 Doug Yates purchased his father’s half of Roush Yates Engines to become a co-owner in the company.

Roush Yates Performance Products is not responsible for errors with photography, typographical content, or pricing and are subject to correction and/or change without notice. Some parts are not legal for sale or use in California on any pollution controlled motor vehicle.