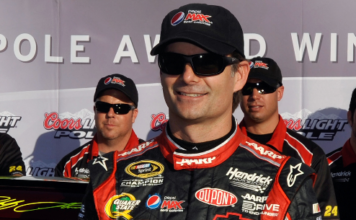 The award, named in honor of former NASCAR competitors Billy and Bobby Myers, was presented Nov. 29 at the NASCAR NMPA Myers Brothers Awards event at the Encore Theater at Wynn Las Vegas.

Gordon began his full-time Cup racing career in 1993, winning the championship in 1995, 1997, 1998 and 2001. He has 87 career wins in his 20-year career, all with Hendrick Motorsports. His contributions to the sport, though, go beyond on-track accomplishments. He formed the Jeff Gordon Foundation in 1999 to aid children battling cancer. Through the foundation, he supports the Jeff Gordon’s Children’s Hospital in Concord, N.C., and has committed to help children fight cancer in Africa. He also, with sponsor AARP’s Drive to End Hunger program, works to bring attention to hunger among Americans 50 and older.

“Jeff Gordon is an ambassador for NASCAR,” NMPA President Rea White said. “He has not only brought excitement to the sport on the track, but has brought awareness and aid to the children who most need it. He is truly a champion in every respect.”

Voted on each year by members of the National Motorsports Press Association (NMPA), the Myers Brothers Award recognizes individuals and/or groups who have provided outstanding contributions to the sport of stock car racing.

Richard Childress was also a finalist for the award.

The award, presented annually since 1958, honors Billy and Bobby Myers, racers who competed in the Carolinas and Virginia. They passed on a legacy of racing to their families that spans three generations.