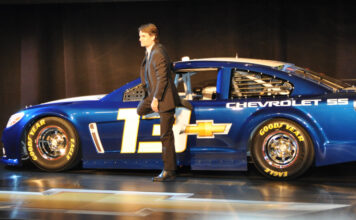 From Chevrolet’s first win 57 years ago at Columbia Speedway in South Carolina in a Chevy driven by Fonty Flock to Chevy’s current claiming of ten consecutive manufacturer’s championships, the brand has run deep in NASCAR racing.

Today in the Encore Theatre at the Wynn in Las Vegas, team Chevrolet unveiled its newest addition to the race line, the 2013 Chevrolet SS race car. It will be powered by a V8 engine and will be rear wheel drive.

“It’s been an ongoing process to help our fans make the link between what they see on the track and what they see in the showroom,” Mark Reuss, President of GM North America, said. “We are focused on putting the ‘stock’ back in stock car racing.”

Reuss described the process of developing the 2013 SS, from the initial scale model, which endured wind tunnel testing, to then working with the passenger design team to integrate the features of the passenger car with the race car.

A full-scale model of the SS race car was then developed and intensive wind tunnel testing continued, as well as testing on various race tracks, all while hiding the car under the checker board camouflage.

Both the front end and the rear in the new Chevrolet race cars are representative of the production car.  The cars will be available in 2014 in the showroom next fall.

After the buildup, Reuss then unveiled the new SS Chevrolet, with the assistance of one of their most recognizable drivers, four time champion Jeff Gordon.

“This thing looks amazing,” Gordon said after seeing the car unveiled. “I’m so excited to race this car.”

“I had a chance to test it at Charlotte a couple weeks ago and it drove great.”

Team Chevrolet also acknowledged the partnership with NASCAR in the development of their new racing machine.

“This is exciting,” Mike Helton, President of NASCAR, said. “All year long as we were working on the 2012 season, we were completing the roll out of our 2013 race cars.”

“We are delivering what the fans have asked for,” Helton continued. “This completes the roll out of the new cars and we are very excited to get them to Daytona.”

Team Chevrolet then introduced the cars of not only Jeff Gordon, but also Jimmie Johnson, Kevin Harvick, Tony Stewart and Jamie McMurray.  Team owners Rick Hendrick, Gene Haas, and Chip Ganassi were also on hand to show off their new race cars.

“I’m really excited,” Jamie McMurray said of his new No. 1 Chevrolet SS. “Chevy did a great job on this.”

“I think it’s really important for our sport to have some brand identity between the different manufacturers,” McMurray continued. “Obviously the look of the car is completely different than what we had last year.”

“The one thing we haven’t had is something to distinguish the makes and now the shapes of the cars are different,” McMurray said. “So, I think that’s really cool.”

“I haven’t driven it yet as far as the performance side of it but from a manufacturer’s side with the relevance from the show room floor to the race track, I think the new body style is definitely the most exciting part for me,” Kevin Harvick, soon to be driver of the No. 29 SS Chevrolet, said. “The way it drives is secondary to how the car even races.”

“I think it’s all about the car being relevant to what is being sold on the show room floor,” Harvick continued. “I don’t know that you can ever really put the ‘stock’ back in the stock car compared to what you drive on the street, but the styles are really similar and that’s what is important.”

“I haven’t driven it but one time…but I know there’s going to be a lot of differences,” Tony Stewart, 2011 Champion and driver of the new No. 14 SS Chevrolet, said. “It helps to simplify to where it’s not so much a science project.”

“It’s got a lot more potential to make the field that much tighter.”