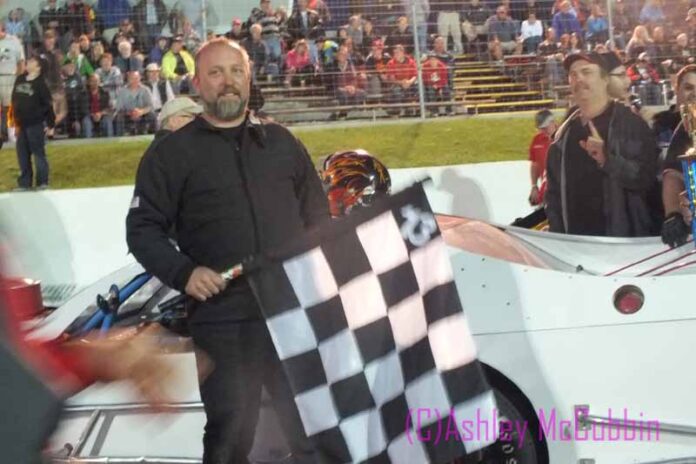 In continuing last year’s success, Gary McLean would win the North Toronto Auction 30 at Sunset Speedway after taking the lead from Matt Barton on lap nine.

Barton would grab the win in the first heat, followed by Brent McLean, Davey Terry, David McCullogh, Dean Scott and Ryan Dick. Scott had a spin partway through the race for a quick caution.

In the second heat, Bobby Tolton would go or a spin in the early going and be done early in the heat with overheating problems. After the restart, Branden Bullen would go for a spin in turn two. Gary McLean would grab the win ahead of Lane Zardo, Dave Osbourne and Bullen.

Partway through the third heat, Dick would run into problems, hitting the inside wall after having some other problems. Davey Terry would win ahead of Barton, Brent McLean, McCullogh and Scott.

Tolton would find more trouble in the second heat as he would go for another spin. McLean went on for the daily double ahead of Zardo and Osbourne.

With his two heat wins, Gary McLean would get the pole and lead early ahead of Barton, Terry, McCullogh and Brent McLean.

The first caution would come out on lap five for Bobby Tolton spinning in turns one and two.

On the restart, Barton would grab the lead ahead of Gary McLean, Brent McLean, Terry and Osbourne.

However, the caution would quickly fall once again when Tolton would have trouble once again. He would pull into the infield, done for the night.

On the restart, Barton and Gary McLean would be side-by-side for the lead with McLean clearing Barton on lap 10 ahead of Terry, Brent McLean and McCullogh.

Trouble would strike for Lane Zardo with four laps to go as he would head down pit road.

With two laps left, Barton would slip from second to third after being passed by Brent McLean.

Gary McLean would go on to the win ahead of his cousin Brent McLean, Matt Barton, Davey Terry and David McCullogh. Dave Osbourne finished sixth, followed by Branden Bullen and Dean Scott.