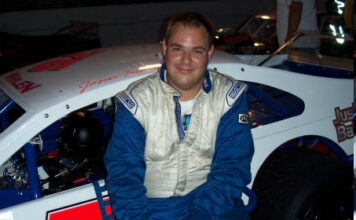 Many racers realize along the way that another career may be awaiting them other than being behind the wheel.  This week’s edition of NASCAR BTS goes behind the scenes with Jason Trinchere to learn more about his journey from short-track racer to design engineer at Penske Racing.

Trinchere started his racing journey early, in fact from the time of his birth. And, as with so many racers, his father also was involved in the sport.

“Ever since the time I was born, there was a race car or a go kart in our garage,” Trinchere said. “My dad started racing when he was in high school.”

“When I was born, he stopped driving and became a car owner,” Trinchere continued. “So, he always had cars around the whole time I was growing up.”

Trinchere caught the racing bug from his father and set off in go karts. Initially it was just for fun but the competition soon drew him in, hook, line and sinker.

“We had fun, raced dirt and had three championships,” Trinchere continued. “Then we started racing in the dirt asphalt division in the early ‘90s.”

“So, I started driving those and that was the whole time I was in high school,” Trinchere said. “I didn’t even have my driver’s license when I started racing.”

Although he loved being behind the wheel of a race car, Trinchere also enjoyed the mechanical and engineering side of the sport.

“My dad was an auto mechanic so I learned that side of the business from him,” Trinchere said. “When I was in high school, I took machine shop in Vo Tech so I could make a lot of the components for our race cars.”

“I wasn’t’ too sure of what I wanted to do and I was thinking of coming to the NASCAR Tech School but was concerned it was more for people not involved in racing,” Trinchere continued. “My dad talked me into studying engineering since I was the kid sitting at home playing with erector sets all the time.”

After high school graduation, Trinchere had to make a critical decision about going to college and also what to do about his racing career. Ironically, he initially wanted to follow the path of his now team owner at Penske Racing.

“When I came out of school, I wanted to go to Lehigh to follow in the footsteps of Roger Penske but the reality of how much college costs set in,” Trinchere said. “So, I went to community college to do my electives and take their associates classes in engineering.”

“Then I transferred to Penn State Harrisburg campus,” Trinchere continued. “It was far enough to experience college life but close enough to home to go there and race.”

Trinchere also happened to find his soul mate in the racing business.

“When I went to college, I didn’t have the time to race in one place, so I started going to upstate New York and raced at Oswego and all different kinds of tracks,” Trinchere said. “At that time, when I was finishing college, my girlfriend (who is my wife now) was also involved in racing as her dad raced at Selinsgrove Speedway in Pennsylvania.”

“So, imagine that, I met my wife through racing as well.”

Trinchere and his wife decided that they needed to consider heading south to Charlotte and the heart of racing country to make both of their dreams come true.

“I got a phone call from Dave McCarty, who at that time was the crew chief at Spears Motorsports for David Starr,” Trinchere said. “So, I followed up on that opportunity and he liked the fact that I was a racer with a degree in engineering.”

“Being a Truck team, they didn’t want to hire a Cup engineer because a kid coming out of college was much cheaper,” Trinchere continued with a chuckle. “We moved down, bought a house (the same one we are living in now) and went racing.”

“I worked at Spears and the next year Aric Almirola came in as the driver,” Trinchere continued. “I learned a lot there with David Starr, Aric Almirola and Dennis Setzer.”

“It was a very small team with about twelve employees,” Trinchere said. “It was a neat opportunity to go to a little team and run against the big boys and do well.”

“That made me feel good.”

Trinchere left Spears to go to CJN Racing with Jason Keller as the driver. But shortly thereafter, he headed to DEI where he stayed even through the merger with Chip Ganassi Racing.

“I went to DEI to be the Nationwide engineer when they ran a car, which was only part-time,” Trinchere said. “We had Trevor Bayne and Jesus Hernandez as the drivers.”

“I was also support engineer for the 01 Cup car when Regan Smith was driving it,” Trinchere continued. “Then I switched over to Martin Truex’s car.”

“It was a very busy year, going to a third of the Cup races and the rest of the East races.”

“At the end of the season, there were talks and then the merger with Chip Ganassi occurred,” Trinchere said. “Before Homestead they came around and told us what time the meeting was, all but me.”

“I didn’t know if that was good or bad,” Trinchere continued. “But I learned that people with meetings were let go and people who didn’t have a meeting were being kept.”

“That was a little bit of a hard time.”

Post-merger, Trinchere worked for both the 1 and 42 teams.

“It worked out pretty well working for Jamie McMurray and Juan Pablo Montoya,” Trinchere said. “I did a program called ‘Dart Fish’ at the track where I would record qualifying runs.”

“I did that for a year and at the end of the season, the engineering manager asked if I could do anything else to help the team and I was moved over to the design engineering team,” Trinchere continued. “It was fun to have the direct impact of what happened at the track.”

Trinchere had a very eventful New Year, however, as he was offered and accepted a job at Penske Racing.

“Within three days of sending my resume in, I had an interview,” Trinchere said. “I’m doing the same stuff as a design engineer.”

“Their group is a little larger and uses different software but I am working with the 2 and 22, “Trinchere continued. “It’s been exciting but scary changing jobs, especially after five years.”

“So, this is the next chapter for me.”