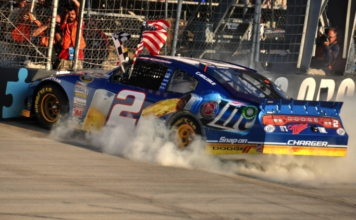 After two weeks at home in Charlotte, the NASCAR Sprint Cup Series, NASCAR Nationwide Series, and NASCAR Camping World Truck Series teams pack up and head north to Dover, Delaware for a date with “The Monster Mile” at Dover International Speedway. For the first time since the season openers at Daytona in February, all three series will be at the same track for a rare tripleheader weekend.

The first of two visits for the Sprint Cup Series at Dover will feature the best drivers in the world talking on one of the toughest tracks on the circuit. The one mile concrete oval, which is one of the only two high banked concrete tracks on the schedule in addition to Bristol, is one of the reasons many have labeled this treacherous track as “Bristol on steroids”. This race, the 13th of the season, also marks the halfway point in the 26 race regular season, with 13 races remaining until the start of the Chase for the Sprint Cup this fall.

Who To Watch: The best driver statistically at Dover? That would be none other than Carl Edwards. With his one win, eight top fives, 12 top tens, 532 laps led, and an average finish of 8.3 in 17 races, it’s no surprise that Edwards has earned the nickname of “Concrete Carl” for his prowess on tracks with a concrete surface.

The majority of the season has seen Kyle Busch and his Joe Gibbs Racing team dominating and winning race after race. If anyone wants to make it to Victory Lane, they will have to go through Busch, who has three wins, seven top fives, 10 top tens, three poles, 853 laps led, and an average finish of 11.6 in 15 races. Joe Gibbs Racing has won four of the last six Nationwide Series races at Dover and with a win this weekend, Busch would become the series wins leader at Dover, setting yet another record in the process.

The Dover tripleheader weekend kicks off with the Camping World Truck Series hitting the track for their race on Friday afternoon. This race has been known to produce more first time winners and rookie winners than repeat winners. If this continues to hold true, we could see one of the series many young guns make their first trip to Victory Lane.

SM Staff
Previous article
Hot 20 over the past 10 – Charlotte, where NASCAR reviewed its Big Bang Theory
Next article
Johnny O’Connell to Drive for JR Motorsports at Road America