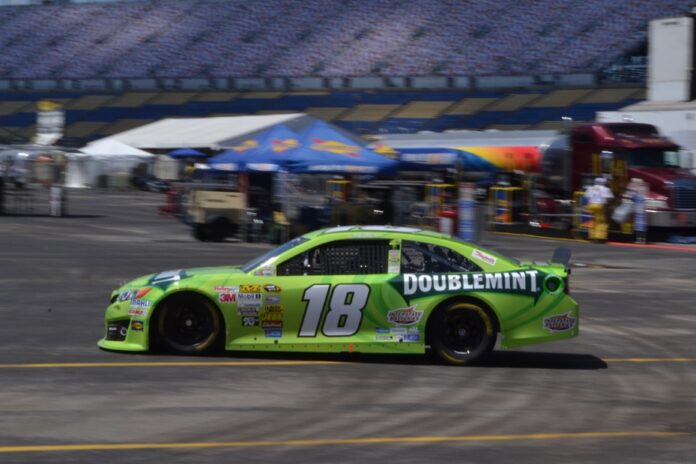 Saturday night’s Quaker State 400 marks the third time in NASCAR Sprint Cup Series history that the race will be held in the Bluegrass State at Kentucky Motor Speedway.  Over the years the state of Kentucky has developed a reputation for high quality horse racing.  They have produced a myriad of thoroughbreds throughout the years, and this weekend we shift from the idea of thoroughbred horses to thoroughbred NASCAR drivers.

The inaugural Quaker State 400 at Kentucky Motor Speedway was held on July 10, 2011.  Joe Gibbs Racing driver of the No. 18 Doublemint Toyota, Kyle Busch, led six times during the race for a total of 125 laps to become the noteworthy winner of NASCAR’s top series in the state.

In 2003, an eighteen year old Kyle Busch, won The Channel  5 205 NASCAR ARCA Series race.  That win marked the beginning of Busch’s stock-car stardom at Kentucky.  Busch has won one race in each of the stock-car divisions at Kentucky Motor Speedway.

When asked if he could put his finger on why he has been so good at Kentucky in all divisions, Busch commented, “I can’t actually, but I can remember going there for the first time back in 2003 and it was my second-ever ARCA race and the first time on a 1.5 mile oval.  It was a big deal and it was a fast racetrack and I ended up winning that weekend.  I had to do some maneuvering around Frank Kimmel to win.  It wasn’t easy.  But since then, going there in Nationwide and being fast there every time, and going back to race when Sprint Cup didn’t have a date, yet, just getting your feet wet for when that opportunity came when Sprint Cup did go there.  When we went with the Cup car, we were fast right when we unloaded.  Dave Rogers was my crew chief and he had won there several times as a Nationwide crew chief prior to that and had a lot of notes to understand what it took to get around Kentucky, and we ended up winning the first Cup race there.”

Reflecting on how it feels to be the Inaugural Sprint Cup winner at Kentucky, Busch said, “I think it’s cool.  You look at some of the new venues we’ve been to over the years and Jeff Gordon got to win a number of inaugural races, like the Brickyard, Fontana, and Kansas.  He was always the guy who was known to figure out places the fastest, but we were able to be the ones to do that at Kentucky.  There aren’t many opportunities these days to go to a new venue, so for us being able to win the first race there was extra special.”

Hoping to add to his Kentucky legacy, Busch will be running all three NASCAR races this weekend.

When asked what he enjoys about running races in all three NASCAR divisions, like at Kentucky this weekend, Busch said, “It’s a lot of on-track time.  On Thursday we practice all day, and then there’s the truck race that night.  It’s a busy schedule and you are running back and forth between garages and it’s typically hot there in Kentucky.  The biggest thing you get to work on, and enjoy, is essentially the on-track time and getting to figure out the bumps there, and you get extra track time to figure out if you need to get through them better or if you need to get your guys to give you a better setup to get through the bumps.  I have three divisions worth of chances, and three crew chiefs who have different mindsets that, by the time I get to Saturday, I have a feel for what I need to win the Cup race with our Doublemint Camry.”

Unfortunately, Busch fell short of a win in Thursday night’s NASCAR Camping World Truck Series 3rd Annual UNOH 225 with his No. 51 ToyotaCare Toyota finishing in third place.  However, if Busch’s theory of benefiting from his extra track exposure this weekend pans out and he improves with each race, he is already only two improvements away from victory lane.

With six Nationwide Series wins and two Sprint Cup Series wins under his belt this season, his impressive history at Kentucky Motor Speedway, including being the inaugural Quaker State 400 winner, is it safe to say that Kyle Busch is a top Kentucky thoroughbred? Can there be any higher accolade in the Blue Grass State?