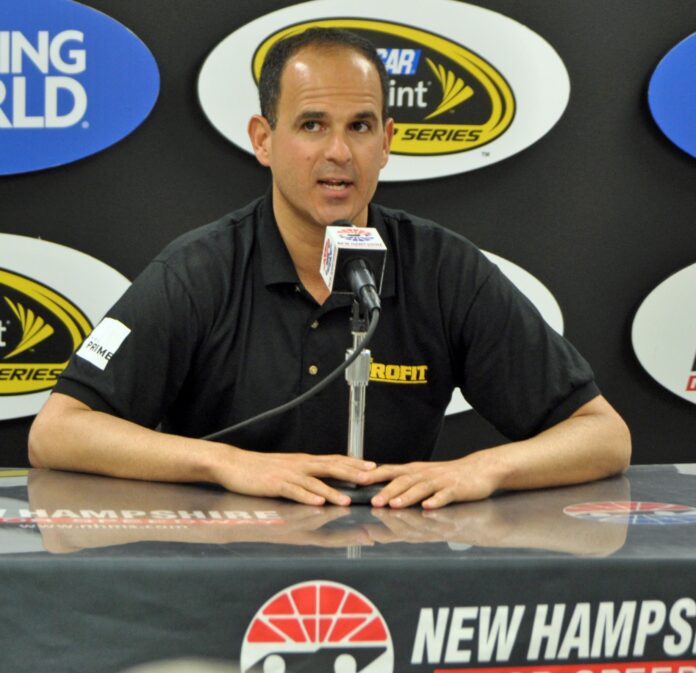 While his partnership with NASCAR has been profitable for Marcus Lemonis, the CEO of Camping World, he is leveraging that relationship in a whole new way.

Lemonis announced at the New Hampshire Motor Speedway this weekend that he and CNBC Prime are launching a new reality show called ‘The Profit.’

The show will utilize Lemonis as a kind of ‘emergency responder’ and business mentor to small businesses in trouble. ‘The Profit’ will premiere on CNBC Prime on Tuesday, July 30th at 10:00 PM.

Lemonis chose to announce his newest endeavor at New Hampshire Motor Speedway, serving as the headline sponsor for Saturday’s Nationwide race and the lead sponsor for the Cup race. He also served as the Grand Marshal for both races.

“The Profit’ is about the heart and soul of American Business,” Mark Hoffman, President of CNBC, said. “The future of growth and employment in this country is really about small business.”

“That’s where we really focus on ‘The Profit,’ Hoffman continued. “The premise of the show is that we go into small businesses that are in trouble.”

“Marcus (Lemonis), who is an incredibly successful businessman and serial entrepreneur, goes into these businesses, focuses on three components, including people, product and process, and makes decisions about whether he wants to help them,” Hoffman continued. “He focuses on their business and what they need to do to get back on the straight and narrow.”

“Here’s what’s unique about this program,” Hoffman said. “Marcus puts his own money into these businesses.”

“He’s there to make investments,” Hoffman continued. “And there are incredible results that come about and that’s what you’ll see in the first six episodes.”

Lemonis for his part said that ‘The Profit’ is unique because it is all about the people. And it is totally authentic, unscripted and unpredictable.

“I’ve never been a believer in consultants who go in and out and tell you what’s wrong,” Lemonis said. “What Mark and I wanted to do is show the insides of a small business.”

“Sometimes things work out and sometimes not at all.”

So, why has Lemonis decided to announce this new endeavor at a NASCAR race in the Granite state?

“This is our fourth year with New Hampshire and we’ve had better luck from a performance perspective than we have anywhere else.”

Lemonis has learned a lot about small businesses by his own successes and challenges along the way. And he credits his own business launch to none other than Lee Iacocca, American business icon.

“I got into the RV business because of Lee Iacocca,” Lemonis said. “He told me that if I wanted to make a difference in business in the US, I have an opportunity that will shock you.”

“That was in 2001 and 12 years later, Camping World is a three billion dollar business,” Lemonis continued. “The things that I have learned about small business are that attention to detail is critical and that without good people, it doesn’t matter how good the product is.”

“Small businesses need to understand that the business is larger than them,” Lemonis said. “Even as the owner of Camping World, I recognize that I’m a small gnat in the scheme of the business.”

“I think the other piece is recognizing whether you have a good product or not,” Lemonis continued. “This show is on a network that is focused on numbers and performance.”

“Our show is about numbers but is a deeper diver into those businesses.”

Lemonis has also managed to weave his business and NASCAR worlds together in ‘The Profit’. In fact, his sponsorship contract extension may just depend on what happens in one of these episodes.

“Our deal goes through 2015 and one of the tipping points is in one of the episodes where there is an integration of NASCAR into one of the shows,” Lemonis said. “This will decide whether we extend or not.”

“NASCAR has done a great job of taking Camping World to the next level,” Lemonis continued. “But for the trucks, my biggest question is what the new Fox Sports is going to look like.”

“I just want to be sure I’m not going to be shuffled to the back,” Lemonis said. “We’ll have an answer by the end of this year whether we will extend it or not.”

While ‘The Profit’ sounds very serious, it also will have its entertaining moments. Hundreds of companies have already applied to be a part of it and no doubt more will get in line after the premiere of the show.

“I hope they learn a few things about business and the working world,” Hoffman said. “I hope they will also have a little fun watching it.”

“This is a prime time entertainment program with a lot of emotion, inherent conflict and businesses that really need help,” Hoffman continued. “You have to coach people to better performance.”

In addition to the new show, Camping World also did a major ‘shout out’ to the first responders in the Boston Marathon.

Lemonis and his company announced in Turn One at the New Hampshire Motor Speedway on race day the donation of an emergency response vehicle to the Boston Police Department in recognition of their courage, determination and bravery in the aftermath of the Boston Marathon.