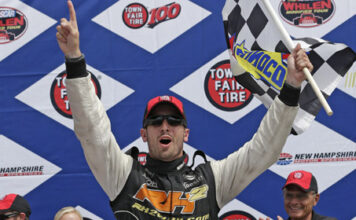 In a race where the lead changes were frenetic, NASCAR Whelen Modified Tour, Doug Coby, driver of the No. 52 Furnace & Duct Supply/Seekonk Grand Prix Chevrolet, made the pass when it counted most and took the checkered flag in the Town Fair 100 at New Hampshire Motor Speedway.

Although the reigning champ, this was Coby’s first win of the season, his second New Hampshire victory and his eighth career Modified Tour Victory. And after sitting out the last race at Riverhead Raceway due to a qualifying wreck, he is back in championship contention, hoping for a repeat performance.

“It’s really neat to be in Victory Lane here,” Coby said. “I’ve been really close a lot of times.”

Coby has most certainly done his homework on New Hampshire Motor Speedway, including trying to plot out the best strategy to get him into the winner’s circle.

“I’ve really studied the draft here and watched a lot of video when I missed a win or an opportunity to finish in the top-five,” Coby said. “It’s not going to happen all the time but I feel that I have a great understanding of where I need to be positioned at the end of the race.”

“And it’s just a matter if I can get there,” Coby continued. “Both wins, I wanted to be running second on the last lap because I think that’s the best place to be to get a win here.”

“It just so happens that we had a caution and we won last race in September here and I think the 3 and the 16 running side by side gave me an opportunity to start moving my car around and not giving them a chance to get a good draft on me,” Coby said. “There were about four lapped cars as well that I could use their air to pull me forward.”

“Then it was just crazy and chaotic because you’re listening to your spotter and looking everywhere and thinking to yourself, am I doing the right thing?” Coby continued. “I’m coming to the white flag and saying I’m not going to win this thing.”

“ So, just one of those deals where I don’t know how the heck it happens but you’re in.”

Coby’s victory was especially sweet after having wrecked out of the race at Riverhead the previous race weekend. The driver of the No. 52 actually had to sit on the sidelines and watch as he had no backup car available to him.

“I knew in practice that we have every bit as good of a car that we had in September,” Coby continued. “So, that gave me a little extra confidence.”

Coby also hopes that his win, along with the Modifieds being on one of the biggest stages at New Hampshire Motor Speedway, will call more attention to the series. He said that the Whelen Tour has the best combination of drivers of all different ages and capabilities.

“Loudon’s still the biggest race on the schedule in terms of putting the Modifieds out in front of the public,” Coby said. “I hope when I win and get to do interviews, that it makes other people interested  in seeing the Modifieds and learning more about our drivers and the personalities that we have.”

“Teddy (Christopher) is in his 50’s, I’m in my 30’s and Ryan (Preece) is 22 and that’s who was battling for the win out there,” Coby said. “I think that says something about the skill level and our series and for Ryan, the maturity that he possesses and of course Ted, the knowledge that he has.”

“And I guess I’m somewhere in the middle.”

While Coby does have thoughts of the championship repeat on his mind, he acknowledged that he and his team have work to do to be able to truly compete.

“I think we have a way to go before I assess the championship fully,” Coby said. “I have to get through the August Bristol race.”

“If you’re anywhere in an arm’s length distance of the championship, then you still have a shot.”

Coby assessed the championship competition and shared his opinion that young driver Ryan Preece is the one to beat for that honor.

“Obviously the 16 team of Ryan Preece has it going on this year,” Coby said. “They changed a motor this week and he went out and led most of the second half of the race.”

“Ryan is the strongest competitor hands down,” Coby continued. “But there are eight of us out there really and it’s the same eight cars battling for the top spots.”

“For us, it’s a matter of getting back to where we’re at,” Coby said. “We won the championship last year for a reason and we’re in Loudon victory lane for a reason.”

“We’re coming back and we’re not going to let it be easy on anybody.”

Coby also gave a nod to another Ryan in the field, Cup competitor Ryan Newman, who finished fifth in his No. 7 Menards/Wix Filters Chevrolet.

“Ryan Newman did not time trial well but then Ryan Newman blew right by me before the break,” Coby said. “Obviously they have tremendous equipment and he is a Cup driver so he knows what he’s doing here.”

“It’s great to have him in our field,” Coby continued. “They take it very serious and want to win races.”

“And I’m sure they’re just as unhappy as every other Modified team that didn’t win today.”

Ted Christopher, veteran driver of the No. 3 Silver Dollar Construction/Cape Cod Copper Chevrolet, came in second and Ryan Preece, who was also making his debut in the Nationwide race, finished third in his No. 16 East West Marine/Diversified Metals Ford.

“Our cars usually do put on a show,” Christopher said. “Just came up a little short.”

“Really want to thank the guys for giving me a car capable to win here in a bunch of years,” Christopher continued. “The last cautions just brought everybody closer but it was the three of us at the end.”

“Anytime you have a day where you can take the car off the trailer, run up front and lead laps is a good day,” Preece said. “We had a head gasket that went in practice, so we had to swap motors.”

“For them to put that back up motor and time trial twelfth, I knew we had a good race car,” Preece continued. “We were fourth on that restart and then made our way up front in the top three.”

“It’s great to be a part of this team and I’m looking forward to running 200 laps in that Nationwide race.”