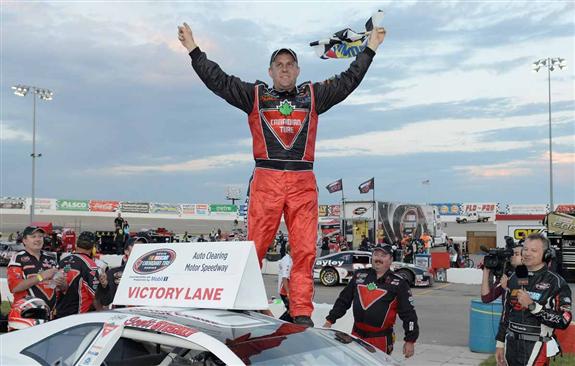 SASKATOON, Saskatchewan, Canada (July 17, 2013) – The rough start to the 2013 season for Scott Steckly is a mere memory as the two-time champion is squarely back in the hunt for another NASCAR Canadian Tire Series presented by Mobil 1 title.

Steckly picked up his first win of the season four nights before at Motoplex Speedway and Event Park in Vernon, B.C., giving him a sweep of this year’s two-race swing through Western Canada as the series hits the midway point of its season. It’s Steckly’s 13th series career win which ranks third all-time behind D.J. Kennington with 18 and Andrew Ranger’s 17.

Steckly began the year with a pair of finishes outside the top 20, but since then he has driven his No. 22 Canadian Tire Dodge to a pair of wins and two second-place finishes.

“We decided we were going to really dig down and just win as many races as we can,” Steckly said. “We definitely could have won those first two races. So, it’s not performance. Our cars are fast every week. That’s just part of it. Hopefully, that was our bad luck for the year.”

Steckly, a two-time series champion who won the inaugural series visit to ACMS in 2009, was thrilled to win both western races this year.

“It’s amazing to be able to win two races in a row like this out west,” he said. “Not many people get to do that in their career.”

Pole sitter J.R. Fitzpatrick set a blistering pace early, but he was not able to hold off Steckly after a spirited battle for the lead that lasted for several laps. Steckly was able to take control after Dilley made contact with Fitzpatrick on Lap 226 that sent Fitzpatrick spinning out of contention for his first oval-track win since July 2007.

Dilley challenged for the lead in the closing laps, but could not get by.

“We got up beside him there once,” he said. “It’s hard to do. You can get up beside, but you can’t get a run off without wrecking. So, we got second two years in a row here. Maybe next year we can win.”

Jason Hathaway bounced back from a spin to finish third.

But after contact sent him spinning late in the race, Hathaway had to make another charge forward.

Kennington started from the rear of the field at the initial green flag due to an unapproved adjustment after NASCAR impounded the cars when his team scrambled to quickly swap engines following qualifying.

Kennington moved to the lead in the championship standings with 229 points, while Steckly climbed to second with 224 points. L.P. Dumoulin, who ran up front for much of the race but ended up 12th after an incident, slipped to third in the standings – also with 224 points. Hathaway is fourth with 223, with Fitzpatrick fifth at 208. Rounding out the top 10 are Martin Roy at 195, Dowler at 190, Beauchamp at 188, Ryley Seibert at 186 and Jason White at 182.

The TSN premier telecast of the Velocity Prairie Thunder 250 presented by Bayer CropScience will be on Sunday, July 28 at 11 a.m. ET while the French-language telecast on RDS2 will debut at 11 p.m. on Friday, Aug. 16.

The NASCAR Canadian Tire Series presented by Mobil 1 is back in action next on July 27 at Autodrome St. Eustache (Que.) for the National 250. It is the series’ first visit to the track since July 2010.