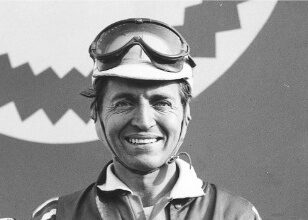 Julius Timothy “Tim” Flock was born in Fort Payne, Alabama and grew up in one of the most famous racing families of early stock car racing. His two brothers, Bob and Fonty were both NASCAR drivers, as well as his sister Ethel Flock Mobley.

Both brothers tried to discourage Tim from following in their footsteps. It was his sister Ethel and her husband who helped him get his start in racing in 1948.

In 1949, Tim, Bob, Fonty and their sister Ethel became the only four siblings to drive in the same NASCAR Sprint Cup Series race.

Flock won his first championship in 1952 while driving Ted Chester’s Hudson Hornet. In 33 starts, he earned eight wins and had 22 top five finishes.

In 1955, Flock won his second series title driving a Carl Kiekhaefer Chrysler. It was a record breaking season that included 18 wins, 32 top fives and 18 poles in 39 races. Flock’s 18 wins in a single season was a record that would remain unbroken until 1967 when Richard Petty captured 27 wins in one season.

He was one of the most colorful characters of the sport and a fan favorite. Flock competed in eight races with his pet monkey, Jocko Flocko, as a passenger in his racecar.

In May 2013, it was announced that Flock would be inducted into the 2014 class of the NASCAR Hall of Fame. Richard Petty, an inaugural member of the Hall of Fame, cast his vote for Flock and spoke highly of his driving prowess.

“I have never in my life seen a smoother driver than what Tim was,” said Petty.  “When I started along, I said look, he’s one of the guys that I want to be as good as, be as smooth as what he is. A lot of times he was in a race and you’d never know he was in it, until they threw the checkered flag and he’d won it.”

“I was very surprised and very shocked,” Frances Flock said. “I’m still just shaking all over.”

Carl Flock was ecstatic, saying, “Coming from the King, saying how smooth Daddy was, that’s a big honor.”

Angela Campbell
A native of Charlotte, NC, Angela (Angie) was first introduced to racing by her father. An avid fan of NASCAR, she found a way to combine her love of racing with her passion for writing. Angie is also an award-winning member of the National Motorsports Press Association. Follow her on Twitter @angiecampbell_ for the latest NASCAR news and feature stories.
Previous article
PrimeSportsMotorsports: Chase for the Cup Preview
Next article
A Spin-Out For A Teammate To Get A Chase Spot, Why Not?