Surprising and Not Surprising: Geico 400 at Chicagoland 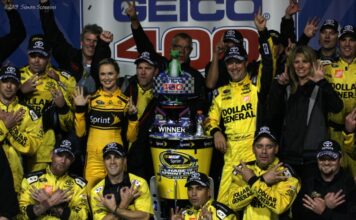 After a wild week of penalties, shakeups to the Chase line up, and a lengthy rain delay to boot, here is what else was surprising and not surprising in the first race of the Chase, the Geico 400 at Chicagoland Speedway.

Surprising:  While it was surprising that the race was run in its entirety, albeit into the wee hours of the night, the biggest surprise was the impact of the change from day to night on the engines, forcing two of the Chasers right into the basement of the standings as a result.

Dale Earnhardt Jr., driver of the No. 88 Time Warner Cable Chevrolet for Hendrick Motorsports, and Joey Logano, behind the wheel of the No. 22 Shell Pennzoil Ford for Penske Racing, both had catastrophic engine failures, finishing 35th and 37th respectively.

Even more devastating, Logano lost six positions in the standings to the 12th spot and Junior lost four positions falling to the newly formed 13th Chase position. Both are not only in the basement spots in the standings but also over 50 points behind leader Matt Kenseth.

“I’m pretty angry,” Logano said after dropping out of the race. “That was such a fast race car but unfortunately the motor blew up.”

“It is a bummer to have it in the Chase when you are running for a championship,” Logano continued. “It just wasn’t our day I guess.”

“I’m not really sure if it was motor or transmission, but it has got us sitting on the sidelines,” Junior said. “Something broke there in the motor.”

“It’s tough,” Earnhardt Jr. said. “It’s going to be really hard to win a championship this far behind.”

Not Surprising:  Coach and team owner Joe Gibbs not surprisingly reacted as a proud papa when it came time to visit one of his drivers in Victory Lane and the other in the runner up role.

JGR racer Matt Kenseth scored his first ever win at Chicagoland and his career best sixth win for the season while Kyle Busch missed the weekend sweep by just one position, bringing his JGR Toyota home in the second spot.

“We won the race tonight,” Gibbs said. “We were one and two there.”

“My wife probably said it best, she said it’s like having babies, they’re all great,” Gibbs continued. “That’s the way you feel about it.”

Surprising:  Two future Stewart Haas Racing teammates and yes, lame duck Chase contenders both, had a surprisingly good battle going between the two of them late in the race, with Kevin Harvick finishing third and Kurt Busch finishing fourth.

“Yeah we had a lot of fun,” the driver of the No. 29 Budweiser Designate a Driver Chevrolet, said. “Came up a couple short, but a good day.”

“Yeah, we had a battle with Harvick and we brought our Chevy home in fourth,” Kurt Busch said. “Top fives are what it’s all about in the Chase so one down and nine to go.”

Not Surprising:  He’s back……After a four-week downward spiral of twentieth place finishes or worse, Jimmie Johnson and team No. 48 got their mojo back, finishing top-five and representing the Hendrick Motorsports in the third position in the Chase standings, just eleven points behind the leader.

Even more impressive, although not surprising, the No. 48 bunch had to overcome two problematic episodes on pit road to regain their forward momentum.

“From a jack failing to a call on pit road for a lug nut that was not supposedly on, and a variety of issues, it was a great comeback,” Johnson said. “We wanted to finish better of course, but we’re very proud of all the hard work from Hendrick Motorsports, Chad Knaus, and this No. 48 Lowe’s race team.”

Surprising:  Apparently a little off-track action was all that was needed to score another surprising top-10 finish, at least for Rookie of the Year contender Ricky Stenhouse Jr.

“We started the race and thought we were in big trouble,” Stenhouse Jr. said. “Luckily after the rain delay, it kind of helped our car turn a little bit better and we were able to get an eighth place finish.”

“Took a nap and really played it out well.”

Not Surprising:  For someone who came to the Chase party a bit late and who also may have been up a bit past his veteran bedtime, Jeff Gordon was not only wired after his sixth place finish, but he looked like he could actually run another race or two.

“Well, that was an incredible accomplishment,” the driver of the No. 24 Drive to End Hunger Chevrolet, said after his top ten finish which propelled him into the seventh spot in the Chase standings. “It just shows how much fight this team has in them.”

“Can’t wait to get to this next race,” Gordon continued. “Where is it? Loudon? We’re ready!”

Surprising:  Although not in the Chase, the reigning champ had a surprisingly good run, scoring the highest finish for the Ford Camp at Chicagoland. Brad Keselowski, driver of the Blue Deuce, took the checkered flag in the seventh position.

“It was hard to tell because we never got a shot to find out.”

Not Surprising:  In addition to Logano’s engine failure, the other Ford Chasers did not fare well either. Carl Edwards, in the No. 99 Fastenal Ford, finished 11th and Greg Biffle, behind the wheel of the No. 16 Post-It Ford Fusion, finished 16th.

“There are a couple of things I wish I could take back,” Edwards said. “We were just missing something at this style of race track.”

“That was a rough night,” Biffle said. “We had major issues.”

“That wasn’t our best night.”

Surprising:  Young up and coming driver Cole Whitt had a surprisingly fiery Cup debut for Swan Racing. His No. 30 Swan Racing/Lean 1 Toyota, had an engine failure that resulted in quite the fire ball.

“It just jumped out of gear on the front stretch and blew up,” Whitt said. “It’s not the debut I was looking for at Swan Racing but I look forward to continuing to work with them.”

Not Surprising:  After a cut tire resulted in a 32nd place finish, it was not surprising that Juan Pablo Montoya announced that he would be ending his NASCAR career at the end of the 2013 season and heading back to the IndyCar Series.

Montoya will be racing for the Captain, Roger Penske, joining teammates Will Power and Helio Castroneves back in the open wheel ranks.

“I’m really excited,” JPM said. “If you really dream of any ideal position for a driver, and you could say, you could race for Penske, I think that would be No. 1.”

Surprising:  In spite of spinning twice, Justin Allgaier loved every minute of his 27th place run in his Cup debut with Phoenix Racing in the No. 51 Brandt Chevrolet.

“There have been a lot of drivers who have come through and raced in the sport’s top tier,” Allgaier said. “For me, it’s a cool feeling to know my name will go on that list of drivers to run a Sprint Cup Series race.”

“There are so many names of guys that I looked up to and respected,” Allgaier continued. “I’m excited to get there.”

Not Surprising:  In spite of the rain delay, with the red flag lasting five hours, ten minutes and 21 seconds, at least one driver recognized that the fans were the real heroes at Chicagoland Speedway.

“Matt (Borland, crew chief) and the guys were able to discuss strategy with the break we had, and they made some good adjustments once we went back racing,” Ryan Newman, driver of the No. 39 Quicken Loans Chevrolet said. “I’m glad we were able to get the whole race in.”

“And I’ve got to thank the fans that stuck it out to see the finish.”