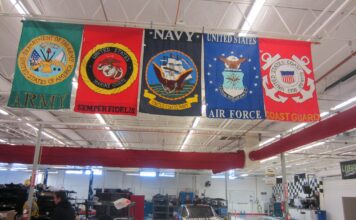 While NASCAR is indeed patriotic and wounded warriors and troops are often brought to the track, there are veterans in the midst of the sport that not only service their race teams but have also provided distinguished service to their country.

“I am the Director of Transportation for Furniture Row Racing,” Charlie Krauch said. “My main focus is to make sure the truck drivers get to the race tracks, unload and load the trucks every week, get the cars ready to go, make sure that they leave on time for the race, testing and going back and forth to North Carolina to the wind tunnel.”

“I’m not a rah-rah veteran type of guy,” Krauch said. “I think that goes back to my days in the service when it was not a very popular occupation to be in.”

“I very seldom tell people that I was in Vietnam and to this day as well just because of the way things were back then,” Krauch continued. “Today, I’m thankful that people are recognizing those in the military.”

“They need to be recognized and I’m really happy that they are,” Krauch said. “I know how it was on the other hand.”

“You have to understand that these are basically kids in the service right now, with probably the average age of around 18 or 19 years old,” Krauch continued. “You take them from coming out of high school to putting them in the service and sending them overseas and having them see and do what they need to do over there, it’s pretty traumatic I would think.”

“I know it was for me and I would think it would be the same way for them.”

“When I’m having a bad day, I sometimes think about the time that I spent in the military and reflect back on that,” Krauch said. “And I realize that things could be a lot worse like it was back then.”

“I sometimes use that as a focus for myself to bring myself up a little bit every now and then.”

“They are the ones that need to have the focus of Veteran’s Day,” Krauch said. “I also think about the older veterans that we are losing every day, like the World War II guys.”

“I think there is a big role for them as well,” Krauch continued. “I think the focus needs to be on the troops we have now more so than in the past.”

“They are the ones that are doing it now and they really need to be the focus.”

Krauch’s colleague Chuck Lemay, hauler driver for the No. 78 team, agreed with that assessment as he reflected on his own service in light of Veteran’s Day.

“I was in the United States Navy from January of 1975 through January of 1978,” Lemay said. “I signed up for a two years overseas program and I was stationed in Sasebo, Japan.”

“I was in kind of a related situation to what I do know as I was a quartermaster, which dealt with navigation,” Lemay continued. “I was on the USS White Plains, named after White Plains, New York.”

“When we were at sea, we kept the ship’s position with our charts and celestial navigation by the stars all the way up to the latest technology that just came out,” Lemay said. “But nothing is more precise than the stars you know, like the days of Galileo.”

“My ship was a supply ship so we would pull alongside other ships,” Lemay continued. “We would steam alongside the other ships and transport goods across on wire cables.”

“So, I’ve kind of come full circle you know, because now I’m steering the hauler, or ‘Raven’ as I call her,” Lemay said. “She is a real pretty truck and I steer her down that highway now.”

“Veteran’s Day, the older I get, the more I appreciate it,” Lemay said. “My father was in the Battle of the Bulge and he was a POW in World War II.”

“He has since passed, but he was my hero,” Lemay continued. “My brother was in Vietnam and he was a machine gunner on the helicopter.”

“So, here I was the baby of the family so I thought that I should do that too,” Lemay said. “They sold me on that commercial, ‘Join the Navy, and See the World.’

“I thought I needed a little discipline in my life so I joined up with the Navy,” Lemay continued. “And it was the best three years of my life.”

“And I met my lovely wife when I was in the Navy and we are still married today 36 years later.”

Both Lemay and Krauch will be working on Veteran’s Day, even after their team scored a fifth place finish at Phoenix International Raceway. The two team members will be getting ready for the final race of 2014 as they prepare for their longest trip of the season, from Denver, Colorado where the team is based, to Homestead-Miami Speedway.

“We have our biggest trip of the year coming up next week,” Lemay said. “Almost 40 hours to get that hauler from Colorado to Homestead.”

“We’ll get back to Denver after Phoenix and then the other two drivers will flip the truck around and then we will come in Tuesday morning and take off,” Lemay continued. “Looking at world through a windshield, like the country song says, that’s what we are doing.”

Both Lemay and Krauch will, however, take a moment to look at the flags flying in the shop, reflecting all branches of the service as they celebrate Veteran’s Day.

“I think that’s really super to have the flags in the shop,” Lemay said. “History shows that we’ve never really treated our veterans really well.”

“World War II, they had the big parade and the picture of the sailor kissing the girl in New York,” Lemay continued. “But after that, the Korean and Vietnam veterans didn’t really get anything.”

“It is really nice to see this turn around lately and showing these guys respect,” Lemay said. “So, to see those flags flying in the shop, every day they catch my eye,” Lemay said. “I was part of that.”

“It makes you feel proud.”

Lemay and Krauch also expressed pride in working for their driver Kurt Busch, who has been so active with the Armed Forces Foundation, focusing on those veterans with hidden war wounds, such as post-traumatic stress disorder and traumatic brain injury.

“I want to first thank all veterans past, present and future for their bravery and sacrifices in preserving our freedom,” said Furniture Row Racing driver Kurt Busch. “I urge American citizens to make an extra effort on Veterans Day to thank those who served.”

In addition to Krauch and Lemay, the No. 78 team has five other veterans who have served their country, including David ‘Bugzee’ Hicks (Navy), Andy Morgan (Army), John Parks (Marines), Craig Phillips (Air Force) and Barney Visser (Army).

“It’s pretty special to have seven team members who are veterans, including our team owner Barney Visser,” Busch said. “I am very proud of them, as I am of all of our veterans.”

Perhaps Lemay summed it up best as he reflected on his own service and the service of others, sharing how he recognized Veteran’s Day at Phoenix International Raceway this past weekend.

“I just did celebrate Veteran’s Day a little bit ago,” Lemay said from the track. “A bunch of Marines came by and I just shook their hands.”

“Everyone should shake the hands of anyone in the service, especially on Veteran’s Day.”

SM Staff
Previous articleMarshall’s Madness: Debating Who’ll Drive The No. 20 For 2014
Next articleSurprising and Not Surprising: Phoenix Advocare 500