Surprising and Not Surprising: Phoenix Advocare 500 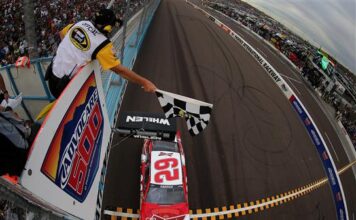 After welcoming a serviceman home in honor of Veteran’s Day and with all eyes on the Chase contenders, here is what was surprising and not surprising from the 26th annual Advocare 500 at Phoenix International Raceway.

Surprising:  Drivers leaving their teams at the end of the 2013 season had surprisingly good finishes, with the best of course being race winner Kevin Harvick, who will leave Richard Childress Racing to go to Stewart Haas Racing in 2014.

“We challenge each other,” Kevin Harvick said of his RCR relationship. “There’s no better way to go out than to do what we’ve done this year.”

“I think as we move forward will probably make us closer as friends.”

And along with Harvick, Kurt Busch, another driver in transition who will be leaving Furniture Row Racing to join Harvick as Stewart Haas Racing teammate, finished fifth.

The top ten was filled with other racers leaving their teams after the checkered flag flies next weekend at Homestead Miami Speedway, including Juan Pablo Montoya, who finished sixth and is heading to the IndyCar Racing Series; Martin Truex Jr., who is leaving Michael Waltrip Racing for Furniture Row Racing and finished eighth; and Ryan Newman, who finished tenth and will head from Stewart Haas Racing to Richard Childress Racing in the New Year.

Not Surprising:  With championship points on the line all around, there were a few mea culpas issued not surprisingly after the race end.

Carl Edwards, who had a scary moment of close racing and contact with championship contender Jimmie Johnson, could not apologize to him more. Edwards first apologized over his radio after the contact and then met Johnson on pit road after the race to declare mea culpa yet again.

“Yeah, I definitely did not mean to hit him,” Edwards, driver of the No. 99 Fastenal Ford, said of his Johnson close encounter. “He did a heckuva job saving it and I’m just glad he saved it.”

“I did not want to be part of the championship in that manner.”

Edwards himself almost had the race won but ran out of gas to finish a disappointing 21st.

The other mea culpa, which had definite championship implications, came from Jason Ratcliff, crew chief for Matt Kenseth. Ratcliff and the team struggled all day with the handling of the car and in the pits, finishing 23rd in the No. 20 Dollar General Toyota and falling 28 points behind the Chase leader.

“I apologize to all of you,” Ratcliff continued. “Just a bad job on my part.”

Surprising:  While Phoenix usually generates some exciting racing, there was a surprising amount of strategy that played out throughout the race, with cars staying out, pitting, and taking all kinds of tire combinations. In fact, there was so much confusion for one driver that it almost made his head spin.

“There was a lot of strategy and it confused the heck out of me,” Joey Logano, driver of the No. 22 Shell/Pennzoil Ford said after finishing ninth. “At times we were leading the race and at times we were 24th.”

“Overall, it was a weird race because you didn’t know where you were at and you just passed the cars in front of you,” Logano continued. “It was too confusing for me.”

Not Surprising:  Jimmie Johnson channeled his inner dirt track racer to bring home yet another top-ten finish, his 17th in 21 races at Phoenix International Raceway. To be precise, Johnson finished third in his No. 48 Lowe’s/Kobalt Tools Chevrolet.

“I knew I had a great race car,” Johnson said. “But I really had to fall back on my dirt driving skills racing out here in the desert all the years that I did.”

“I knew I could get through traffic and I knew I was in good shape relative to the championship battle,” Johnson continued. “I’m in a position I want to be in and now we just need to go to Florida and have another good day.”

Surprising:  Kasey Kahne, driver of the No. 5 Farmers Insurance Chevrolet is a basement dweller in the point standings no more, thanks to his second place finish in the Valley of the Sun. Kahne advance from the 13th position in the Chase to the 12th spot after posting his seventh top-10 at Phoenix International Raceway.

“We got our car really good about Lap 150,” Kahne said. “I got a little loose in the last restart but just felt good about our Farmers Insurance Chevrolet.”

“We made some big gains and I got a nice second-place finish.”

Not Surprising:  Ricky Stenhouse Jr. not only maintained his strong lead in the Rookie of the Year battle over girlfriend and competitor Danica Patrick but actually gained ground after his 12th place finish and her 27th place finish.

“It was a tough day all around,” Patrick said after starting 32nd, battling a loose race car and getting caught in a major-league wreck with Cole Whitt, David Reutimann and Justin Allgaier. “We started out pretty loose and got down a lap early.”

“Then obviously we got caught up in the accident,” Patrick continued. “It’s disappointing, but the GoDaddy guys did a good job of fixing it as best they could so we could finish.”

Surprising:  It will be a surprisingly different Vegas experience for Dale Earnhardt Jr. Usually the sport’s most popular driver picks up that award at the Myers Brother Luncheon and heads on home, however, this year, he will have a major speaking role as he is fifth in the point standings after finishing fourth at Phoenix in spite of a loose wheel.

“We had a fast car,” the driver of the No. 88 National Guard Chevrolet said. “I thought Steve Letarte (crew chief) could get some good strategy to get us back up into the top-10, top-five and I was real happy with the way we were able to rebound.”

This was Junior’s third top-5 finish in the past four races.

Not Surprising:  Jeff Gordon, driver of the No. 24 Axalta Chevrolet achieved another milestone after his 14th place finish at Phoenix. Gordon led his 400th lap in 2013, which marks the 20th consecutive year that he has led at least 400 laps.

Surprising:  Phoenix proved to be the tale of the two Davids, with David Gilliland having a good run, at one point running top-10, and teammate David Ragan having engine troubles yet again.

Gilliland finished 24th and moved up to 25th in the point standings while Ragan finished 35th and fell to 28th in points.

“That was probably the best car we had all year,” Gilliland said. “We had some brake issues at one point, but overall it was a great car and a good points day.”

Not Surprising:  Greg Biffle had an eventful day at Phoenix as he had to start from the back of the field due to a transmission change in his No. 16 3M Scotch Ford.

Nevertheless, Biffle was able to run in the top-10 with the help of some strategy from atop the pit box and finished 13th in the race.

Biffle also moved up one place in the championship standings to the seventh spot.

The NASCAR Sprint Cup Series will head south to Homestead-Miami Speedway for the Ford Ecoboost 400 season finale where the 2013 champion will be determined.