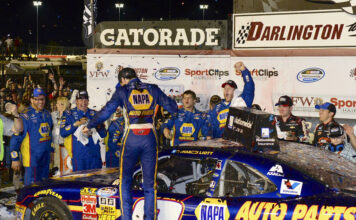 There’s nothing like a weekend at Darlington Raceway to remind you why you love racing. The excitement begins to build as you drive through the tunnel. As you step out of your car and gaze out at the grandstands, your mind begins to fill with the memories of all that has gone before and the anticipation of things to come.

Will a first time winner be crowned? Will records be broken? Whose dreams will come true and whose hopes will be crushed?

A look back at some of the highlights from another historic racing weekend at Darlington:

Kyle Busch scored his 37th career Nationwide Series pole and with 65 wins in the series was a serious contender for the win in the VFW Sport Clips Help a Hero 200 race. But the “Lady in Black had other plans and he had to settle for a fourth place finish.”

Chase Elliott made it look easy Friday night winning in his first start at Darlington. He also etched his name in the record books becoming:

He now has two wins in only seven starts in the series but if you listen to team owner Dale Earnhardt Jr. the best is yet to come.

“He has amazing car control. We saw that on several occasions out there tonight.” Earnhardt continued saying, “He’s got a great level head, good character and nothing really rattles him. So when it came down to the end there and it was time to really get after it, he kept his composure and did what he needed to do to make it work. That’s going to be tough to contend with for many years. I’d like to think that we’re going to hang on to him for a little bit and try to get him ready for the next level but he’s ahead of schedule.”

Kevin Harvick, Dale Earnhardt Jr. and Jimmie Johnson gave the crowd an electrifying finish at the Bojangles’ Southern 500 Saturday night as Harvick grabbed his second victory of the season in a green-white-checkered finish. He became the first driver to capture two wins this season which virtually assures him a place in the Sprint Cup Chase.

Harvick waxed poetic as he talked about the allure of Darlington.

“You’ve got to love it, gray racetracks”, he said. “You can almost see the sparkle of the rocks coming out in the asphalt. That’s so exciting. Maybe we need to spread the South Carolina sand on Kansas and Charlotte and all these other racetracks that haven’t aged as fast as this one. When you start to see that gray and you start to see the seams and you can see the sparkle of the small rocks in the asphalt, it just makes it fun. Darlington is what it was supposed to be tonight, the cars slipping and sliding and bouncing off the walls and hard to drive something, I don’t know.”

Dale Earnhardt Jr. finished second for the third time this season and Jimmie Johnson saw another race win slip away.

Earnhardt was clearly disappointed that he came up short but proud of the effort.

“It’s a little disappointing,” he admitted, “to come that close because I know I don’t really run that well here and the opportunities to win are going to be very few compared to other tracks. It hurts a little bit to come that close because we worked so hard to try to win races. Running second is great but nobody is going to really remember that. But we’re proud of it. ”

Johnson said that moving forward, their efforts would be focused on “unloading closer.” He explained, “We seem to find a way come race time to get a good finish and honestly have a shot to win some races. But showing up at the track a little bit closer is key for us. We’re really just trying to get a grasp on these rules, and we go home with what we’ve learned from a previous race, bring a new mousetrap, and unfortunately we’ve had to continue to work on it each week. That’s really our goal is to show up closer.”

Darlington Raceway continues to cement its place in NASCAR history and promises to deliver more with plans to “honor the track’s history and shape its future.”

As part of the celebration, Bill and Chase Elliott were introduced Saturday as the “face” of the program. Track president Chip Wile, along with Bill and Chase, talked about future plans which will include a retro ticket design for the 2015 Bojangles’ Southern 500 and a Classic merchandise product line that will focus on previous decades and will be available for purchase.

Wile encouraged fans to share their stories saying “We have the most passionate, loyal fans in all of motorsports and we look forward to the role they will play as we celebrate our past, present and future.”

If you have a story to share or an idea on how to celebrate the history of Darlington and NASCAR, you can send an Email to mailto:darlington1950@darlingtonraceway.com.

As I left the track and made my way home, my only regret was that it would be another year before I could reunite with old friends and make new memories together at “The Track Too Tough To Tame.”

Angela Campbell
A native of Charlotte, NC, Angela (Angie) was first introduced to racing by her father. An avid fan of NASCAR, she found a way to combine her love of racing with her passion for writing. Angie is also an award-winning member of the National Motorsports Press Association. Follow her on Twitter @angiecampbell_ for the latest NASCAR news and feature stories.
Previous article
Todd Gilliland Scores Pair of Late Model Runner Up Finishes at Ace Speedway
Next article
Spend Race Day from the Eyes of a NASCAR Pit Crew Member at Richmond International Raceway