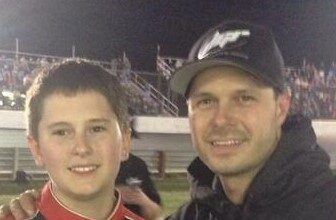 Third generation racer Todd Gilliland, son of David Gilliland and grandson of Butch Gilliland, got back to racing for the season at Ace Speedway, where he finished second in his late-model stock car (LMSC) debut and also in the 40-lap Limited Late Model race later that same evening.

“I raced in two classes, Late Model and Limited Late Model, and finished second in both,” the thirteen year old said. “I was happy, especially for my first race of the season.”

“Of course I wanted to win though,” the driver of the No. 98 Ford said, just a bit dejectedly.

The youngster had to battle mightily for his second place finish in the 75-lap LMSC race on the 4/10 mile track, starting in the eighth spot but dropping back to the 14th position early in the race.  Once he got his bearings, however, be began his march up to the front and by halfway through the race, he returned to the top-10.

He then went on to run his second race and in that 40-lapper, again scored a second place, runner up finish.

“I’m really happy with how I did,” Gilliland said. “In the first race, I was mad that I fell back so far, but my car was really fast so I was able to get back up to the front pretty good.”

“I’m just really thankful for all the help my mom and dad and Chris (Chris Lawson, crew chief) have given me.”

“This is what I really want to do and it’s been awesome.”

Todd Gilliland does indeed look to his family for his racing support, particularly when it comes to working on his car.  The eighth grader spends every minute possible working in the shop, which is located right at their home in North Carolina.

“I try to do as much work on the car as I can,” Gilliland said. “I’m still learning about all that stuff.”

“We got a new crew chief Chris Lawson and a bunch of guys helping on the car like my dad.”

“I’m learning how to do everything just like my dad does,” Gilliland continued. “I get under there and help and learn how to do it.”

“My favorite part is body stuff,” Gilliland said. “You always want to try to make it look nice. It’s fun to work with the metal.”

“You can pick all the colors,” Gilliland continued. “Our car is black because, I don’t know, I like black. Some people like the bright colors but not me.”

The youngest Gilliland celebrated his two runner up finishes with a relaxing weekend, watching his dad battle the ‘Track Too Tough to Tame’ at Darlington. His next race is in two weeks where he will return to Ace Speedway to yet again race those late models.

Until then, Gilliland is looking forward to spring break from school as he and his family have special plans.

“Spring break is in two weeks,” Gilliland said. “We’re going to Turks and Kakos. We’ve been there three or four times.”

“We stay at Beaches and go surfing, snorkeling and sometimes we just relax by the pool,” Gilliland continued. “I’m looking forward to that for sure.”

While Gilliland has no fear whatsoever at the track, he is just slightly worried about one event that is coming up in his young life.

“School gets out like June 10th or something and I will go to high school next year when I graduate from eighth grade,” Gilliland said. “I’m a little bit nervous about high school, but I was nervous about middle school too and I loved it.”

In addition to school, Gilliland is also busy drumming up support for his race team. He is grateful to several local companies, including Norfleet Developments, Country Chevrolet, Eibach Springs, Performance Racing Warehouse and Gear Tech that help out but he, like every other racer, is in search of sponsors.

“I’m out there looking,” Gilliland said. “I think they should come and work with me.”

And without a doubt, Gilliland’s finishes, including three consecutive runner-up finishes in his stock car career and a second place finish in a Limited Late Model race at Myrtle Beach Speedway last November, should definitely be attractive to some interested sponsor looking to bring a young talent to light.

But for now, the youngster is just looking ahead to Spring Break and finishing the school year as he continues to learn and grow as a racer, following in his family’s footsteps toward the checkered flag.