Surprising and Not Surprising: Bojangles’ Southern 500 at Darlington 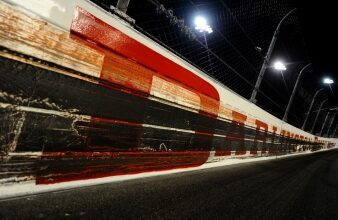 As the blinding sun faded into darkness, drivers danced with the lady in black at one of the toughest tracks on the circuit. Here is what was surprising and not surprising from the 65th annual Bojangles’ Southern 500 at Darlington Raceway.

At one point, Aric Almirola and Danica Patrick were trading paint, as well as Austin Dillon and A.J. Allmendinger, the latter calling the young Dillon rookie a ‘punk’. There was also some testiness between the normally solid duo of six-time champ Jimmie Johnson and Chad Knaus during some of their radio chatter.

Probably the biggest incident of the race occurred in the last few laps between Kurt Busch, who was running ninth in the first attempt at the green-white-checkered, and Clint Bowyer, who made contact with him when the green flag flew.

The contact was so severe that Busch was unable to complete the race, finishing 31st in his No. 41 Haas Automation Chevrolet. Bowyer, on the other hand, finished 12th in his No. 15 5-Hour Energy Toyota.

“That was a terrible way to end what could have been a decent night,” Busch said. “We struggled at times to get the balance of the Haas Automation Chevrolet right, but we kind of found our spot just past the halfway point and made slight adjustments the rest of the way.”

“I tried to hold them off the best I could, but someone moved me out of their way and it ruined our night,” Busch said of the restart. “I hate it for the team, but we keep learning each week and we will get better.”

Not Surprising:  In spite of the challenges, several personal bests were achieved by race winner Kevin Harvick, who by far had the stoutest car, leading 239 laps of the 374 total. This was Harvick’s first ever Southern 500 win, adding to his other crown jewel race wins, from the Daytona 500 to the Coca Cola 600 and the Brickyard.

This was Harvick’s 25th victory in the Sprint Cup Series and he also became the first two-time winner of the season, virtually guaranteeing him a spot in the Chase for the championship.

The driver of the No. 4 Budweiser Chevrolet for Stewart-Haas Racing also became the first driver to win from pole position since Hall of Famer Dale Jarrett did so in 1997.

“This is one race I told Rodney (Childers, crew chief) that I wanted to win,” Harvick said. “We were able to put it all together, but this is the Southern 500, this is as big as it gets in NASCAR racing.”

Surprising:  There were several surprising bounces that occurred at the ‘Track Too Tough to Tame.’ Dale Earnhardt, Jr. had a surprising bounce back to score his career best, runner up finish at Darlington after finishing dead last at Texas last weekend with the mistake in the grass.

“A great run, good job by my team,” the driver of the No. 88 National Guard Chevrolet said. “This isn’t one of my best tracks so my team gave me a great car.”

On the flip side, Paul Menard took a surprisingly hard bounce backwards, dropping eight positions in the points, from 10th to 18th, after finishing 41st in his No. 27 CertainTeed/Menards Chevrolet.

“When the sun went down, I think it freed up,” Menard said after hitting the wall on Lap 201. “I hit the wall like ten laps before and I guess the right-front tire just went down.”

“I guess I was in denial,” Menard continued. “There was a lot of damage.”

Not Surprising:  Rookie of the Year contender Kyle Larson continued to impress with his eighth place finish in a backup car to become the highest finishing rookie of the race.

“Yeah, just really proud of my Target Chip Ganassi team for how hard they had to work after I got into the wall and pulled the backup car out,” Larson said. “I started the race off so loose and just had to hang on for a couple runs and Shine got the car tightened up the car for me and we were able to run I thought top‑10 or ‑12 speeds.”

“Finally got up there and then I got in the wall a couple times and had to pull the fenders back out and drive back up there,” Larson continued. “Still ended up 8th, but all in all it was a good Saturday for us.”

Surprising: Six-time champion Jimmie Johnson surprisingly called on the old school racing gods to round out the podium finish for Team Chevy.

“Yeah, just very happy to finish there in the top three,” the driver of the No. 48 Lowe’s Kobalt Tools Chevrolet said. “We struggled the first run or two of the race, but we got the car turning for me and came to life and really did it the old‑fashioned way and kind of drove up through the field before the last pit stop, so proud of the hard work.”

Although he remains winless to date, this was Johnson’s fifth top 10 finish of the season and his 12th top-10 finish in 16 races at Darlington Raceway.

Not Surprising:  Even champions make mistake as demonstrated by the difficulties in restarting by four-time champion Jeff Gordon pretty much throughout the race.

“We had a really strong car and everything was going really well,” the driver of the No. 24 Drive to End Hunger Chevrolet said. “There towards the end, we just kind of started fading and got ate up on those restarts.”

Gordon finished seventh and is still in the points lead, albeit by one point over Matt Kenseth.

“I feel like it is a missed opportunity,” Gordon said. “But another great race car and I’m happy about that.”

Surprising:  Team Penske had a surprisingly tough time under the watchful eye of the ‘Lady in Black’, with Keselowski finishing 17th and Logano finishing 35th.

“It was a long night,” the driver of the No. 2 Miller Lite Ford said. “We didn’t get the finish we wanted, that is for sure.”

“The track was slick so that is part of the unique challenge of Darlington that we all love.”

While Keselowski admitted to getting pushed back by those struggling on restarts, teammate Logano instead had a mechanical failure with just ten laps to go.

“It sucks because you run the whole race and get nothing to show for it at the end.”

Not Surprising:   With the third best driver rating of 107.5 coming into Darlington Raceway, it was not surprising the Greg Biffle, behind the wheel of the No. 16 3M/Red Cross Ford, was the highest finishing Ford when the checkered flag waved.

Surprising:  NASCAR actually made a surprising move, granting an extra set of Goodyear tires for the Bojangles’ Southern 500. The sanctioning body apparently made that move after many teams voiced concerns about running out of tires, given the fall-off and wear.

Not Surprising:  No doubt all of the Cup drivers are looking forward to an off-weekend of rest but Richard Petty Motorsports driver Marcos Ambrose summed it up best.

“From the first lap, the track was as slick as anything,” the driver of the No. 9 DeWalt Ford said after finishing 14th. “This is the most worn out I have been in my NASCAR career.”

After the Easter break, the NASCAR elite return to action in two weeks under the lights for some short-track racing at Richmond International Raceway.