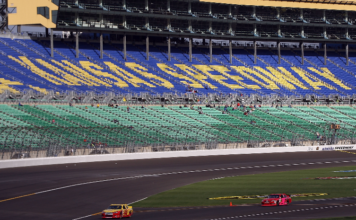 Kansas is not as sexy as Talladega, I admit. It is not a Daytona, a Darlington, and it is no Indianapolis. I think having the race named after a series of sponsors instead of seeking a real identity might have something to do with that. Still, some big names have been among the 16 winners there since they first started up the engines back in 2001.

Jeff Gordon won the first two there, Tony Stewart, Jimmie Johnson, and Matt Kenseth all have a pair. Three years ago, Brad Keselowski made it nine victories for past or future kings of the clutch at the venue. Tony Kanaan won there in 2005, a year after claiming the IndyCar crown. Sam Hornish Jr, who was IndyCar royalty before trying his luck in NASCAR, won there in an open wheel contest. Both Dan Wheldon and Scott Dixon have done it twice. Of ten IndyCar races run at Kansas between 2001 and 2010, the last six were claimed by one who was a champion.

In short, this track is a haven for racing’s blue bloods. Despite its lack of an identity, Saturday night’s NASCAR contest will be claimed by a driver who matters. In fact, of the last 21 Cup and IndyCar races run there, the only non-champions went by such names as Kevin Harvick, Denny Hamlin, and Greg Biffle. That is a trio of pretty damned impressive names, if you ask me. Simply put, the winner this weekend is not going to be Danica Patrick. If she does, then I suggest we start watching her more closely and with an entirely different perspective.

A win at Kansas would do wonders for Stewart, who is sitting winless at 21st in the official standings. Clint Bowyer, Kasey Kahne, and Martin Truex Jr could use the boost, as they are all mired well beyond the 16th and final Chase place.

As for determining simply the best this season, we leave the points untouched other than to reward a race winner 22 additional points. Wins and consistency both have value as we eliminate the need for gimmicks, such as the Chase. Kyle Busch remains out hottest on the year, though Carl Edwards, Dale Earnhardt Jr, Joey Logano, and even the winless duo of Gordon and Kenseth are within 21 points of our leader after ten events. With the gap between first and second each week between 25 and 28 points, either of those latter two would vault to the front by just returning to Victory Lane this Saturday night.

Ron Thornton
A former radio and television broadcaster, newspaper columnist, Little League baseball coach, Ron Thornton has been following NASCAR on this site since 2004. While his focus may have changed over recent years, he continues to make periodic appearances only when he has something to say. That makes him a rather unique journalist.
Previous articleStenhouse Jr. and Zest to ‘Clean Up’ Media at Kansas Again
Next articleKANSAS SPEEDWAY, KANSAS LOTTERY RENEW PARTNERSHIP