Surprising and Not Surprising: 5-Hour Energy 400 at Kansas 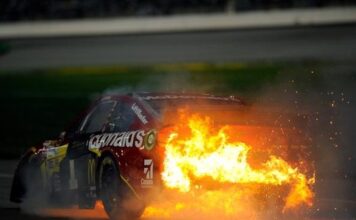 Even with the surprising but thankfully slight delay of the race start for thunderstorms and lightning in the area, here is what else was surprising and not surprising from the first race at Kansas Speedway under the Saturday night lights.

Surprising: Weird and freaky things continue to happen at NASCAR races and the Kansas race was no exception. The lights went dark on the back stretch, the speedy dry truck lost a gear, and the car that was ‘Freaky Fast’, starting from the pole with a new track record, just could not pull off the victory, coming in second instead.

“What put us in second is I didn’t get down pit road very good there coming to the pit box,” Kevin Harvick, driver of the No. 4 Jimmy Johns ‘Freaky Fast’ Chevrolet said. “I kind of ran out of gas, and I was paying attention to the fuel pressure gauge instead of the pit road speed light.”

“I lost some time there,” Harvick continued. “It was a weird night.”

Not Surprising: The race winner shed some pounds, had a blast, and felt like a kid again after scoring his first ‘w’ of the season. Jeff Gordon, behind the wheel of the No. 24 Axalta Coatings Chevrolet, became the ninth different driver to win for the year and scored his 89th career victory.

“It just feels so good to get that first win of the season, especially this year with the point’s structure and how close we’ve been so many weekends,” Gordon said. “I think that that’s a huge weight off our shoulders.”

“I just feel so competitive out there, and that makes me feel young again,” Gordon continued. “I’m going to be 43 this year, but, man, if 43 is like this, I can’t wait for 50. This is all right. I’m having a good time. That’s why I feel young, because I’m just having a great time.”

Surprising: At least one Busch brother has felt that Kansas Speedway has been somewhat of a curse for him, however, this time it was not Kyle Busch but brother Kurt who felt that way after the race.

Kyle Busch, in the No. 18 Snickers Toyota, actually finished the race in the 15th position, while Kurt, behind the wheel of the No. 41 Haas Automation Chevrolet, spun not just once but twice and finished 29th.

“We definitely didn’t get the finish we wanted in our Haas Automation Chevrolet,” Busch said. “It was a disappointing day all around. We had the best qualifying session of the season this weekend, and we had high hopes for the race.”

“It just didn’t work out the way we planned,” Busch continued. “The car was loose, and we couldn’t tighten it up no matter what we tried. It’s just frustrating. We need to do better, and hopefully we will do better moving forward.”

Not Surprising: Danica Patrick was certainly thrilled with her career best finish of 7th in her No. 10 GoDaddy Chevrolet at Kansas. But what really got her going was what she managed to do while racing six-time champ Jimmie Johnson.

“I say that with all the respect in the world,” Patrick continued. “It’s a big deal because he is Jimmie Johnson.”

“Aside from that I was really just overall proud that we stayed up front all day. That was the biggest thing.”

Surprising: Sometimes Goodyear gets thrown under the bus for any type of tire troubles, but this time the third place driver Kasey Kahne gave them all the credit in the world.

In fact, Kahne scored his first top 5 of the season in his No. 5 FarmersInsurance/Thankamillionteachers.com Chevrolet thanks to the tire manufacturer and their recent Kansas tire test.

“I think the Goodyear test here, for whatever reason, we were able to try some things and just look at stuff a little differently than what we had been, and it helped the 5 team, my guys, myself and Kenny (Francis, crew chief) and our communication together,” Kahne said. “It’s helped us a lot since then.”

“I feel like that’s been the key, and ever since we tested here, we’ve ran much better and been a lot more competitive.”

Not Surprising: Given the high speeds at Kansas and the freakiness of the night, it was not surprising to see some really violent crashes, including Jamie McMurray up in flames and David Gilliland in a horrific wreck with Justin Allgaier and AJ Allmendinger.

“I just lost all the steering and got into the fence and had a little fire,” the driver of the No. 1 McDonald’s Chevrolet said. “I don’t know if I ran over something but I ended up crashing.”

“I don’t know what happened,” Gilliland, driver of the No. 38 Long John Silver’s Ford, said. “It looked like the 47 and 51 got together and the 51 came back up the track and I hit him and from there a lot of stuff happened.”

“We are alright though,” Gilliland continued. “Just a little sore obviously.”

Surprising: Interestingly, there was only one Toyota in the top 10 when the checkered flag flew. Matt Kenseth, who had struggled for most of the race, managed to rebound and finish tenth in his No. 20 Dollar General Toyota.

“We were just pretty slow all weekend — as a group, really,” Kenseth said. “Lost that lap on that first run — I was in the ‘lucky dog’ spot a lot of times, just couldn’t catch a caution at the right times.”

“We were just off a little bit all week,” Kenseth continued. “Trying to figure out mile-and-a-half tracks — it was our strong suit last year. We’re really struggling this year as a group. We’re trying to figure it out.”

“We got lucky to finish 10th really.”

Not Surprising:  Kyle Larson, to no one’s surprise, just keeps reeling off impressive finishes in spite of his rookie status. The driver of the No. 42 Target Chevrolet overcame obstacles to finish 12th and score the Sunoco Rookie of the Race honors.

Surprising: Dale Earnhardt, Jr. surprisingly admitted it himself when he shared his frustration at finishing top five and leading nine laps, the same number as race winner and teammate Jeff Gordon.

“What stands out in the back of my mind was how fast the car was during the first half of the race,” Junior said. “We were just flying.”

“But I knew when the temps came down, the bottom was going to be faster and we were going to be in trouble because we were tight all weekend,” the driver of the No. 88 National Guard Chevrolet continued. “We got real tight at the end of the race.”

“Just kind of frustrating there because we never really improved the front grip and struggled with it all weekend,” Junior said. “So, frustrated about that but a good result for us.”

Not Surprising: While it was not Darlington, a track where Mother’s Day has been traditionally celebrated by the sport, there was still a great outpouring of love and support for all mothers in the NASCAR garage.

In fact, driver after driver paid tribute to their mothers, as well as their wives, many of whom were mothers to their children.

So, as Mother’s Day comes to a close, the Cup Series will move next into its home track double header, with the All Star Race and then the Coca Cola 600, NASCAR’s longest endurance race, both at Charlotte Motor Speedway for the next two weekends.