For Jeff Gordon, His Back Is Unfortunately Back 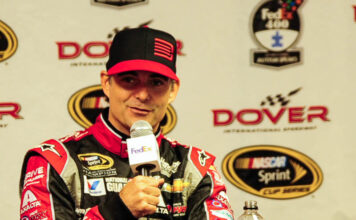 He may be leading the point standings, running consistently, and already have a win in his pocket, but for Jeff Gordon, all the talk at Dover International Speedway was about his back issues being back.

Last weekend, Gordon had to step out of the car for one practice prior to the Coca Cola 600 and actually had Regan Smith, the Nationwide Series point’s leader, on standby for the race in the event he needed to get out of the car.

“I wouldn’t say I’m 100% but I’m closer to normal,” Gordon, driver of the No. 24 Drive to End Hunger Chevrolet, said in the media center. “I still feel some of the effects from last week but I didn’t have any sharp pains. I just had a week of rest and normal activities and lots of ice this week. I was pretty sore on Monday and Tuesday after the long 600. That’s not totally unusual but a little more than normal.”

Gordon acknowledged that his back problems over the Coke 600 weekend were none like he had experienced in the past.

“The issues that I’ve had in the past never were like I dealt with last weekend,” Gordon said. “That was the first time that something like that happened in the car, on qualifying day into a race weekend.”

“I’ve rolled out of bed and had things like that happen,” Gordon continued. “That’s just being tight and not having the muscles loose. That’s part of just getting older.”

“So, it was a little bit foreign to me to have that where I had to get out of the car.”

Gordon actually had to be treated with an injection in order to be able to compete during the race weekend. And thankfully he did get relief, a result that he had not experienced before with the same treatment.

“The treatment I had was an epidural, a type of injection, some type of cortisone that is fairly typical and common,” Gordon said. “I don’t know all the stuff that was in there but it made the pain go away. So, that’s the first time I’ve had to do that on race weekend. I’ve done that in a different part of my back and it didn’t really do much for me. This time it did.”

Gordon seemed a bit frustrated with the back pain in that he has been training regularly in an attempt to keep his back as loose as possible.

“I’ve been working a lot harder on my training, riding a bike and exercising,” Gordon said. “The problem with that is that it tightens everything up even more so than normal. And so if I don’t stay loose and ice it and do the things to keep me loose on race weekend, what happened could possibly occur again.”

It was also evident in Gordon’s remarks that he was indeed taking the back issue seriously, in fact, enough so to potentially put him out of the car permanently.

“If that happens many more times, I won’t have a choice,” Gordon said about the back pain and the dreaded ‘retirement’ word.

Gordon primarily credited his down time and the lack of activity during that time as the major contributing factor to his back pain. That, of course, along with his age and the length of time he has been racing have had impact as well.

“It’s just not sitting,” Gordon said. “The biggest contributor was the fact that we had about a three hour delay from practicing to qualifying and I sat in the truck for too long in one place. I really think that caused the issue that I had and inflamed and irritated it. Once that happened, there was nothing that was going to fix it until I had the injections.”

“Doing this for thirty or forty years, that has contributed to it,” Gordon said. “It’s not different than a golfer or a tennis player with that continuous motion and pushing those muscles and parts of the body. I do have some degenerative disk issues, which is again very common for a lot of people, but when you put that into racing, it is a little bit tougher. It’s just something that I have to deal with.”

Gordon was visibly strained when he talked about making the difficult decision to get out of his race car, even for the one practice session. But once Sunday came and it was time to race, Gordon felt that his sticking in the car in spite of his back pain proved just how strong he is, to himself and to his team.

“I got out of the car on Saturday and it was one of the hardest things I’ve ever done in my life to make that decision,” Gordon said. “It was not an easy one and I was doubting myself but my body was telling me it was the right thing to do.”

“But Sunday went well and we got through it,” Gordon continued. “We actually had a good car up until that last caution came. I think that if anything that only built momentum for our race team to go through what we went through and to go have that kind of a race to show the team what kind of determination I have as well as kind of show our competitors that it’s going to take a lot to get us down.”

“I think that did more good for us for this season and our chances for a championship than anything else.”

So, how hard will Dover be on Gordon’s sensitive back and how will he know if he is set to race the Monster?

“Yeah, there were loads and there were muscles in my back that were being used a lot because it’s a high-banked very fast race track with big sweeping corners, Gordon said. “But there was no shooting pain.”

What will heal the four-time champ’s back the most, however, is very simple, at least from Gordon’s perspective.

“If I win this race on Sunday, I will feel better,” Gordon said. “It’s amazing how a win takes away all your pain.”

Mary Jo Buchanan
Mary Jo has lived and breathed racing since her days at local dirt tracks. From her vantage in the pits, she has developed an interest and expertise in all levels of racing, from go karts to the Cup Series. Many of her articles focus on the "behind the scenes" racing world, as well as up and coming drivers. Mary Jo enjoys writing about the people that make NASCAR and racing work on a day-to-day basis. She recently won an NMPA award for spot news writing. Mary Jo can also be followed on Facebook and Twitter.
Previous articleKyle Busch Dominates Lucas Oil 200 at Dover International Speedway
Next articleKyle Busch Four for Four Wins in Truck Series with Monster Mile Victory

A.J. Allmendinger, driving his No. 16 Kaulig Racing Chevrolet, took advantage of a late-stage caution to get the lead and stay there taking the checkered flag.
Read more
Featured Stories