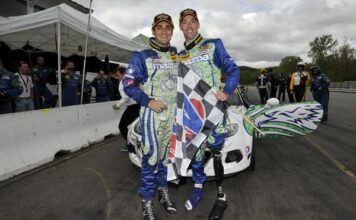 Last week’s IMSA race winner at Lime Rock, USMC Staff Sergeant Liam Dwyer visited the world of NASCAR this past race weekend in Dover, Delaware to experience the sights and sounds of stock car racing and to share his inspirational message of overcoming obstacles and achieving dreams.

Dwyer, currently still on active duty stationed out of Walter Reed, joined the Marines in 2000 after hearing about the bombing of US Navy Destroyer USS Cole. He was deployed both to Iraq and Afghanistan where he suffered serious wounds, including the loss of his left leg after an IED explosion.

In spite of his injuries, Dwyer never gave up on his dream to be behind the wheel of a race car. And he achieved that dream and so much more with a win in the IMSA Continental Challenge at Lime Rock Park in Connecticut.

In typical and humble fashion, Dwyer credited his victory to his team, his co-driver, and all those who stood with him throughout his journey of rehabilitation.

“Last week’s win, everyone is giving me all the praise for it, but the praise really goes to Mazda and my team,” Dwyer said. “I wrecked the car at Mazda Raceway three weeks prior so that was a write off. So, the team had a five-day turnaround. They built a complete new car with 360 man hours and six days later, they were driving up to Lime Rock Park in Connecticut.”

“The car was fast right off the trailer and the team was really good,” Dwyer continued. “Qualifying was rained out so the field was set by points. We started second to last out of the 33 car field. Based on pit strategy, some good driving (a little bit on my part bit a lot on my co-driver Tom Long’s part), we came out with ‘W’ there at my home track at my home state.”

Dwyer’s interest in cars started in his childhood and has continued to this day.

“I grew up with an affection with cars,” Dwyer said. “I had been to Lime Rock numerous times as a child to watch the old IMSA Series there. Actually in high school is when I got interested in racing. I really started doing time trials after Iraq that I had a skill for it. I didn’t start getting faster until after Afghanistan.”

“I’m a Skip Barber Racing School grad back to 2007,” Dwyer continued. “But I got my break two years ago with High Performance Heroes, a vintage car team that found me at VIR.”

“They decided they wanted to build a race car for me,” Dwyer continued. “They built a 1962 Austin Healy Sprite and in 2012 I had some odd success with that. Freedom Auto Sports is a team that is all about supporting veterans and active duty personnel. They wanted to help me out and they started following me. After the season I had last year, they took notice and I got a phone call to go test at Sebring.”

“I’ve had some really good people around me that have gotten me to where I am today.”

Dwyer detailed the adjustments that had to be made to his car, even removing his prosthetic leg to demonstrate.

“So, they have designed a system for me that allows me to do both. Our driver change system in no way aids or hinders me getting in and out of the car.”

While Dwyer has achieved many of his own racing goals, he was most anxious to experience first-hand the world of stock car racing at the Monster Mile.

“I’ve been a NASCAR fan since really before I can remember,” Dwyer said. “I was an Alan Kulwicki fan back in the late 1980s, and after that a Davey Allison fan, and then an Ernie Irvan fan so I did not strike very well with choosing drivers.”

“But since 1999, I’ve been a Tony Stewart fan. I’ve really grown to like Kurt Busch over the last two years because of all he is doing for the Armed Forces Foundation,” Dwyer continued. “I know Kurt Busch personally. I met him twice at the hospital. We were at Walter Reed last year and the NASCAR guys came in.”

“I was on my way to a race that weekend and met him again,” Dwyer said. “I called him out to a go kart race and he took me up on that. He beat me by about 4/10s of a second.”

In addition to his excitement with seeing the NASCAR drivers, Dwyer also was on another mission, that of sharing his words of inspiration to others.

“Having been a NASCAR fan almost my entire life and being at some of the races, just to be here at the track means a lot,” Dwyer said. “I’ve gotten to meet some of the drivers and they have been so hospitable.”

“My message here is to really say that people look at me and say I’ve been dealt a pretty crappy hand being an amputee and with the other injuries that I have to my body,” Dwyer continued. “No matter what we face in life, no matter what challenges we face, the key is staying positive. There are people out there worse off than you. There are people out there that have had it worse than me.”

“I look at everybody and what challenges they are facing and I think this population has become so attuned to if we face adversity, we just give up,” Dwyer continued. “A lot of people stop striving for their dreams at that point. This has only made me drive further. I’ve been dealt this hand and it is really a blessing. I’m fully aware that the only way that I have the opportunities I have now and to go racing and to be here is because of my injuries.”

“If people could start looking at things in a more positive light, there would be less darkness,” Dwyer said. “That’s the biggest message that I can share with people is that for the rest of our lives we should strive to do things and be more positive. I’m a very good example of no matter the hand you are dealt, I’ve made lemonade out of a shitty batch of lemons.”

So, what is next for this fearless competitor as he completes his tour of duty with the Marines and pursues his racing passion?

“My goal in life right now is that I want to race the 24 hours of Daytona and maybe the 24 hours of Le Mans,” Dwyer said. “I’m also hoping to work something out where I can get to the track and still be a Marine.”

“And if I can inspire others to get out there and do things that they thought were difficult, then that’s what I want to do.”