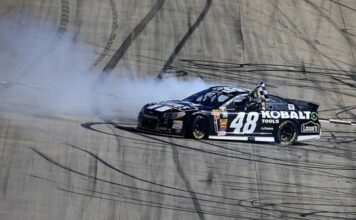 With Miles the Monster rearing his ugly head in more ways than one, here is what was surprising and not surprising from the 45th annual FedEx 400 benefiting Autism Speaks at Dover International Speedway.

Surprising: The winning crew chief, usually the one of the most up-tight people in the garage area as even he admits, must have been inspired by Pharrell’s ‘Happy’ song that played pre-race at the Monster Mile.

Chad Knaus, crew chief for two-time 2014 winner, nine-time Dover winner, and six-time champ Jimmie Johnson, was surprisingly animated in expressing his happiness in the media center after the race.

“Quite honestly I’m at the best point in my life,” Knaus said. “I’ve been very fortunate to have been in this sport for a long time.”

“I’ve seen it grow and change, and it’s been a weird circuitous route to get to where we are now, but quite honestly, I’ve never been happier in my life – with my personal life, my performance at the racetrack, what we’ve got going on, and Jimmie has helped a lot with that,” Knaus continued. “So has Mr. Hendrick as far as making me understand that I’ve got to take time away from the facility and understand that there’s life outside of motorsports.”

“I’ve tried for a long time to deny that fact, but I’m really, really enjoying it all the way around,” Knaus said. “It’s fun. It’s busy as ever, but we’re in a good spot right now.”

Not Surprising: Clint Bowyer did his best impression of Miley Cyrus’ ‘Wrecking Ball’, at least in the minds of Joe Gibbs Racing, hitting Kyle Busch and knocking him out of the race early on and then getting into Matt Kenseth on the last restart, after Kenseth spun his tires a bit.

“It was a day alright,” Bowyer said. “I hated to be in that situation with the 18 (Kyle Busch). It’s one of those deals where I thought I was clear and obviously wasn’t and ruined his day and certainly didn’t help mine.”

“I had a pretty good run at him (Matt Kenseth) and he was still spinning when I hit him and I knocked him into the wall and I was like, ‘Not another (Joe) Gibbs (Racing) car.’ But what a day. Frustrating day.”

Bowyer did swing back, however, scoring a fourth place finish in his No. 15 Cherry5-hrEnergySpecialOpsWarriorFnd Toyota.

Surprising: For only the third time in the past few years, including Martinsville and Daytona, the track itself became part of the headline as a piece of concrete two to three inches deep and six to eight inches wide dislodged, damaging Jamie McMurray’s car as well as the Monster Mile walkway.

The red flag was displayed for 22 minutes and 22 seconds as NASCAR and the track officials made repairs to the hole in the concrete as well as the shattered area of the walkway.

“We have equipment and we have product at every facility,” Robin Pemberton, NASCAR’s Vice President of Competition and Racing Operations, said. “It is an epoxy type filler that we use, and it’s basically the same filler that’s used any time we make a repair at the track, whether it be asphalt or concrete.”

“The track doesn’t want things like this to happen any more than we do or the competitors do,” Pemberton continued. “You always have to be ready for the emergencies and everybody wants to have the same perfect race day as they can.”

Not Surprising: Jamie McMurray was not the only one impacted by unexpected objects encountered on the race track. Martin Truex Jr.’s car was hit by a bird in practice on Friday at the Monster Mile, causing damage to the left headlight area.

For once, however, the driver of the No. 78 Furniture Row Chevrolet, was able to overcome the adversity, scoring his best finish to date in 2014 in the sixth position.

“All in all, it was a good day,” Truex said. “You can just feel that we’re heading in the right direction.”

“And all the dumb luck we’ve had didn’t bite us today,” the New Jersey native said. “Dover has been good to me over the years and it was also a great feeling to bring home a strong effort at what I consider my home track.”

Surprising: Brett Moffitt made his debut in the NASCAR Sprint Cup Series for Jay Robinson Racing and scored a very respectable 22nd place finish in the No. 66 Land Castle Title Toyota. The 21 year old, who tests for Michael Waltrip Racing and Toyota Racing Development, combined that relationship with the Robinson team for the opportunity.

“Hopefully this will open up more opportunities,” Moffitt said. “Obviously I hope this leads to more races…it’s just about having the right people beside you telling you, ‘Look man, you can do this, just keep digging.’”

“That’s what I’ve been doing.”

Not Surprising: Starting at the back of the pack due to an engine change did not deter this young driver one bit. Kyle Larson, behind the wheel of the No. 42 Cottonelle Chevrolet, weaved and bobbed his way through the field to finish as the highest placed rookie yet again.

Larson finished eleventh and is nineteen points ahead of Austin Dillon in the Rookie of the Year standings to date.

Surprising: Team Penske had what looked like a good race weekend at the Monster Mile, with Brad Keselowski starting from the pole position and Joey Logano starting third. Both drivers finished the race in the top-10, with Keselowski in the runner up position and Logano in eighth but were surprisingly disappointed after the race, especially about their performance in the pits.

“Yeah, we just had an up-and-down day,” the driver of the No. 2 Miller Lite Ford said. “I started up front and faded to the back pretty early in the race. We just weren’t where we needed to be in the car.”

“I thought we were going to get a crack at Jimmie (Johnson) and then that last caution came out and we just kind of whiffed on pit road, came out way behind.”

“I drove back up there, and with the help of the restart got up to second but we just never could really get in front of him.”

“We weren’t very good today,” the driver of the No. 22 Shell Pennzoil Ford said. “Some runs we were and some runs we weren’t. We had a tough day on pit road in the beginning.”

“We were chasing the car all day and that is what screwed us up.”

Not Surprising:   Team Penske was not the only one having trouble in the pits. Kevin Harvick, who has been vocal in the media about his disappointment in his team’s performance, struggled yet again.

The driver of the No. 4 Budweiser Chevrolet had eight stops on pit road, for a total average of 42.074 seconds. Harvick and company finished 17th one lap down, after starting the race in the eighth position.

Surprising: In spite of his difficulties, including getting hit by the No. 47 of AJ Allmendinger, crashing hard into the wall, and being in the garage for an extended period for repairs, Greg Biffle and his Pit Bulls were able to keep their streak of completing every race going, the longest in the sport since 2011.

“I didn’t really know what happened,” the driver of the No. 16 3M Ford said. “I just knew that the No. 47 got into us pretty hard and turned us into the fence. They were racing hard back there and he stuck it into a hole that maybe there wasn’t room for, I guess and he slid off the bottom, got his right-rear caught by the No. 17 and up into us.”

“It was a chain reaction,” Biffle continued. “This place is tight and fast and when you get racing that hard back there on a restart, stuff like that is going to happen.”

Not Surprising: Although four-time champ Jeff Gordon seemingly had a good car early on, he faded late in the race to finish 15th, which not surprisingly handed the points lead off to third place finisher Matt Kenseth.

Kenseth now leads by just two points over Gordon, with Carl Edwards third, Jimmie Johnson fourth and Dale Earnhardt, Jr. rounding out the top five in the point standings after the Monster Mile.