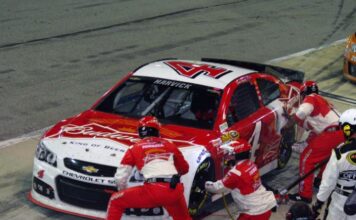 Kevin Harvick won the pole for Sunday’s Brickyard 400, winning all three of the qualifying sessions that including a track record run in the first session.  It was Harvick’s fourth pole of the 2014 season and his second at the Indianapolis Motor Speedway. The new track record is now 47.801 seconds for the speed of 188.281 mph.  Afterwards Harvick said, “After the first lap I was probably more nervous than I have been in a while for qualifying.  Just wasn’t really expecting to have the car run that fast, and then from there, they’re all looking at you, all right, if you screw this up, it’s on you, buddy.  It’s great to have fast cars.  They do a great job preparing the cars and just being able to come to the racetrack and know that the car is going to be fast just takes a huge burden off of everybody’s shoulders just to get the balance right.”

Harvick, not usually known as a great qualifier gave credit to his team for the year he’s had so far. “I think all of that comes down to the car,” he said. “ Obviously my confidence is a lot higher knowing that you don’t have to over‑drive the car or hit a perfect lap to qualify well.  The engine department and the effort that these guys put into the car is different than what I had in the past.”

Jeff Gordon qualified second during the final session and was strong in all three of the sessions.  Gordon said, “I feel extremely good, excited about it. I was in here yesterday and talking about how good our race team is and how good I thought our race car was going to be, and today kind of proves that.  I mean, Kevin (Harvick) was certainly very, very quick, and it was nice to close that gap a little bit on him that third session, but I feel very confident about this weekend.  Starting on the front row is an excellent place to start.  Track position is extremely important, and I couldn’t be more pleased with the efforts that we had today and in that qualifying session to get us that front row start.”

When qualifying started there was a flurry of activity as the cars and teams tried to get on the track first for the first of three timed qualifying sessions.  As Jimmie Johnson waited for his car to get through inspection his team mate Gordon set the pace with a lap of 187.301 miles per hour. It was not long after Gordon set the pace that  Harvick broke the track record with a blistering lap of 188.889 miles per hour taking over the top spot.  As the drivers took their laps the crew chiefs and crews had to stand by and wait to see how everyone else was doing.

With about seven minutes left in that first session Aric Almirola hit the wall and took his car to the garage with left side damage. He plummeted to 42nd on the grid. With only 2 minutes remaining Greg Biffle was on the bubble. As time was expiring Biffle breathed a sigh of relief as Paul Menard did not beat his time.

The three teams that did not qualify in that first session were the N o. 29 of Matt Crafton, the No. 33 of David Stremme and No. 66 of Brett Moffitt. Bobby Labonte qualified via the past champions provisional in the No. 37 car.

Paul Menard said, “We did not do any qualifying runs during practice and I got inpatient and thought we needed to get out there early and ran up on a slow car.” Denny Hamlin noted that his car, “was off over second all weekend long.”  Hamlin will start 27th tomorrow.

Rookies Austin Dillon and Kyle Larson qualified in the 17 and 18 positions respectively in the first round.  Brad Keselowski was third, Kurt Bush fourth with Matt Kenseth rounding out the top five.

During the second session, which only lasts ten minutes,  Gordon was out first and ran a lap 186.990 mph. Harvick responded with another great lap of 47.801 seconds for a speed of 188.281 mph. Brad Keselowski, one of the series best qualifiers and hottest teams came through in third with a speed of  186.575 mph.  Juan Pablo Montoya, driving the No. 12 for Roger Penske, his Indy car owner, qualified for the final five minute session by running in the ninth position.

With under 3 minutes remaining Kenseth, Danica Patrick and Larson were 13 to 15th on the grid. But then, with time expiring, Roush Racing drivers of Greg Biffle and Ricky Stenhouse took to the track.  They ran 21st and 19th respectively and did not make the final session.

Matt Kenseth , who will start 13th said, “ I thought we got through a lot of stuff yesterday (Friday).  Thought it was a real productive day.  Today, we just did a couple qualifying runs. Like I said, the same for everybody.  You always wish you had more practice time in a way, in another way I felt like we were pretty close yesterday.  So, I was okay with it being shorter today. Second time (session) the balance and grip was a lot different. It’s been tough going from round to round. I never thought I’d say I missed single car qualifying but I do, we did better that way.”

Dale Earnhardt Jr., who will line up said, “This morning we went out the track was perfect and when we went out this afternoon it was real tight. It’s been really frustrating. We’re in a bit of a situation where its gonna hurt us balance wise. The guys have been working hard. “

In the final session Harvick set the pace with a 47.753 second lap that meant it was a 188.470 mph. With under a minute left the track got busy and Jeff Gordon came in second and his speed clocked in at  187.770 mph. Harvick swept all three sessions with laps of over 188 mph.  Keselowski was third and Ryan Newman and Brian Vickers rounded out the top five.

Vickers said after the final session was over, “We would have loved to sit on the pole, but I think I’m pleased from the standpoint that I feel like everyone on this Aaron’s Dream Machine Camry team … we maximized our opportunity in qualifying today and that’s always a good feeling.  I feel like we got the most out of our potential of what we showed up with in the car and the speed and everything.  The guys did a great job.  They made the car better each run, and the fact we ran our fastest on our third run on tires is good.  That’s what we really need to keep building on as a team and these qualifying sessions, is being able to get better each run and we haven’t always been doing that, so be able to accomplish that regardless of where we qualify is something I really liked.”

“They work hard to put these cars together. I was happy with car in race trim and we made a lot of adjustments for qualifying. Hopefully we can put together a whole day tomorrow. “

Ed Coombshttp://www.sportshooter.com/coombse
Ed began covering NASCAR for the former Gater Racing News regularly in 2000. He began working with Speedway Media in 2003 by supplying exclusive photos from the races covered. Currently he is the Editor and Assistant Publisher of Speedway Media. He also manages staff and credentialing. With the closing down of Gater News after nearly 50 years he hopes to become a more regular contributor at Speedway Media as a writer and photographer. My Twitter name is @coombsed feel free to follow me I am a member of the National Motorsports Press Association.
Previous articleFord Racing Places Three Top 10 Qualifiers for Brickyard 400
Next articleToyota NNS Indy Post-Race Notes & Quotes