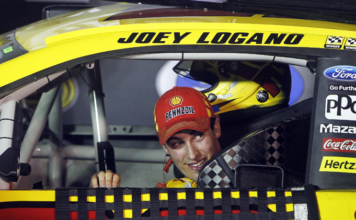 The Coliseum…..Thunder Valley…..and “The World’s Fastest Half Mile”…..here is what was surprising and not surprising from Bristol Motor Speedway in the IRWIN Tools Night Race.

Surprising: Although Team Penske scored a one, two finish, race winner Joey Logano and race runner up Brad Keselowski both admitted that was one of the toughest, most physically demanding races of the season to date.

“It definitely was a very, very tough race,” the driver of the No. 22 Shell Pennzoil Ford for Team Penske said. “I feel like it’s the most physically demanding racetrack, just the baddest, mamma jamma racetrack ever built, not only for the driver but for the race car. You’re just always on the gas or the brake or in the turn. There’s always something going on, and as a driver you don’t get a break inside the race car, either.”

“It was a hard night,” the driver of the No. 2 Wurth Team Penske Ford said. “I’ll tell you, first off, this place, the race pace is really brutal and aggressive. With the cars having all the extra downforce this year and tires improving and some of the new rules, compounded by grinding the track and the track’s high lane having a lot of speed, I swear, this is the most grueling race of the year.”

“It feels good just to complete it and be able to kind of look myself in the eye and know I gave it all I had,” Keselowski continued. “It just wasn’t enough, but I didn’t fall out of the seat, so I’m damned near as proud of not falling out of the seat as anything else.”

Not Surprising: Coach Gibbs has no doubt already sent out for the infamous milk and cookies for his driver of the No. 18 Doublemint Toyota and his crew chief Dave Rogers. The two exchanged some pretty heated words after Busch sped on pit road, got back in traffic and was collected in a wreck for a 36th place finish.

“That’s just pro sports,” Coach Gibbs said. “Every now and then you get frustrated.”

“I think the night was totally frustrating,” Gibbs continued. “(Kyle) had a great car and it was a series of circumstances. Something like that happens in pro sports you can get frustrated.”

Surprising: While Kyle Busch vacated his race car without speaking to the media, his teammate Denny Hamlin could not stop talking about what happened between himself and Kevin Harvick, resulting in his 40th place finish in the Bristol night race. In fact, he even added some physicality to his words, tossing his HANS device at Harvick’s car under the caution laps.

“I’m just frustrated because we had a good run going,” Hamlin opined. “I thought for sure after the first couple runs that we were going to win the race.”

“It just didn’t work out,” the driver of the No. 11 FedEx Ground Toyota said. “Mistakes happen in racing. Obviously, I believe that Kevin (Harvick) made a mistake tonight and that’s just part of it. I was just on the short end of the stick.”

Not Surprising: Matt Kenseth, although winless, continued his consistent streak of good finishes, scoring the third position in his No. 20 Dollar General Toyota. Kenseth was also the highest finishing Toyota driver and, in fact, was the only Toyota to finish in the top-15.

“We’ll keep working on it.”

Surprising: Ricky Stenhouse Jr. had a surprisingly good finish, taking the checkered flag in the sixth spot. In fact, Stenhouse Jr. led the Roush Fenway Racing trio in the finishing order, with both of his teammates finishing behind him, in seventh and tenth respectively for Carl Edwards and Greg Biffle.

“We didn’t start off very good but Mike (Kelley, crew chief) made a lot of changes,” Stenhouse said. “Our pit crew did an awesome job on pit road and gave me some fast pit stops, and Mike made a good call to take the wave around to get back on the lead lap and then the caution came out quick and we were able to make our car a little bit better.”

“We’ve got a lot of work to do, but definitely really pleased with how we finished with how the car drove, so we’ll get it better and we’ll keep working on it,” Stenhouse Jr. continued. “That felt really good to pass some cars. It was a great night.”

Not Surprising: After leading 148 laps out of the 500 lap race, it would be natural to feel a bit befuddled after finishing eighth instead of ending up in Victory Lane.

“I don’t know what happened,” Jamie McMurray, behind the wheel of the No. 1 McDonald’s Chevrolet said. “Our car got really tight with about 100 laps to go.”

“We freed it up on the last pit stop and it didn’t really help,” McMurray continued. “But I’m really proud of everybody on our McDonald’s Chevrolet. McDonald’s has been in this sport for so long and they’ve only won a few races and I really thought tonight was going to be our night to put them back in Victory Lane.”

Surprising: Jimmie Johnson, six-time champ, and Kyle Larson, Rookie of the Year contender, may be at different places in their careers, however they had one thing in common at Bristol. They both had to overcome adversity, from Johnson’s two speeding penalties to Larson’s wreck in qualifying, to finish fourth and twelfth respectively.

“Top fives are good. We are happy about that,” the driver of the No. 48 Lowe’s Chevrolet said. “We had some issues on pit road and got nailed for speeding twice which was totally on us. Just mistakes made there that kind of hurt us a little bit, but we still got a third top five, finished fourth.”

“I made our team have to work really hard with wrecking in qualifying,” the driver of the No. 42 Target Chevrolet said. “Just a long race I felt like I worked hard the whole time. That is the hardest I’ve ever raced. Especially having to do it for 500 laps.”

“That was pretty wild,” Larson continued. “I guess I’m happy with a 12th. That is probably about as good as we were. I had a few run in’s today, but still to come away with a 12th is pretty good.”

Not Surprising: Paul Menard quietly continued his string of good finishes, this time taking the checkered flag in ninth.

“We had a really good car,” the driver of the No. 27 Serta/Menards Chevrolet said. “We had two runs where we just got off. We took right sides and it didn’t work out very well. Then we did a chassis adjustment and put four tires. We feel backwards and got a lap down. We were able to put four tires on and pass some guys for the lucky dog.”

“We got that and we could race again.”

Surprising: Aric Almirola was the biggest loser of the evening, wrecking hard to finish 41st and dropping three spots in the point standings to 24th.

“I’m OK, just disappointed,” the driver of the No. 43 STP Ford Fusion said. “What an amazing race car these guys brought me – two of them – and to go out like that is certainly disappointing, but that’s racing at Bristol – you get caught up in other peoples’ wrecks.”

Not Surprising: AJ Allmendinger continues to ride the momentum wave after his win at Watkins Glen, finishing top-15 at a track where he admittedly has struggled.

“It’s a really good night because I’m not really good here,” the driver of the No. 47 Busch’s Beans Chevrolet said. “At times we had a top-10 car and even at the end there when the car was terrible.”

“We were inside the top-15 with decent speeds and that’s what I wanted to at least do here,” Allmendinger continued. “Times we were eighth, ninth, 10th like last week.”

“So, I think we are making progress. I’m just happy to get out of here and be able to run 500 laps. I think the team was a little bit better than me today. All in all, it’s the kind of momentum we need for going into Chicago.”