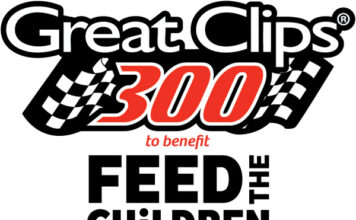 Elliott, who has won three times this season the series, leads the points standings. Atlanta Motor Speedway is offering a special “Chase’s Crew” ticket package for the race. Those purchasing the $30 package will receive tickets in a special Chase Elliott seating section and a commemorative #di9 Chase Elliott rally towel, while supplies last.

Elliott is a past competitor at Atlanta Motor Speedway’s Legends and Bandolero Thursday Thunder summer racing series which competes on the quarter-mile track on the AMS frontstretch.

“This is a really special place for me to go back and race at. To know that I ran hundreds of laps there on the frontstretch and have not run any on the big track, it’ll be our first time to be able to do that,” Elliott said. “I’m looking forward to it, I think it’s going to be a lot of fun.”

Elliott, however, won’t be the only NASCAR Nationwide Series driver with a home state tie-in this weekend.

Conyers driver Chris Cockrum will drive a car bearing a paint scheme honoring the late “Captain” Herb Emory, devoted racing enthusiast and long-time traffic reporter for AM 750 / 95.5 FM WSB. Cockrum will drive the No. 87 car out of the Rick Ware Racing stable.

A supporter of countless charities, Emory was a fixture at Atlanta Motor Speedway during NASCAR events, often hosting a live radio show broadcast from the AMS media center. Emory died unexpectedly in April.

Tucker’s Ryan Sieg enters this weekend ranked 16th in the NASCAR Nationwide Series standings. Driving for his family-owned team, he has notched a pair of top-ten finishes and has finished in 16th place the past two events.

Other Georgia drivers in the field will be Watkinsville’s John Wes Townley in the No. 25 family-owned entry and Unadilla’s David Ragan behind the wheel of the No, 98 for Biagi-DenBeste Racing. Additionally, Joey Logano, a past Champion at Atlanta Motor Speedway’s Thursday Thunder Legends and Bandolero racing series, will pilot the No. 22 for Team Penske in Saturday night’s event.

21-year old female driving sensation Morgan Turpen is among the top contenders to claim victory on Friday Night when the USCS Outlaw Thunder Tour Sprint Car Series makes its return to NASCAR weekend activities at Atlanta Motor Speedway. Drivers from at least eight states are expected to be on hand. The race will take place on Atlanta Motor Speedway’s quarter-mile “Thunder Ring” track on the frontstretch.

Turpen, from Cordova Tennessee has posted the best results out of all USCS drivers in the series’ four-event “Road to Atlanta” standings. She has one win, two third-place finishes and a finish of fourth.

The USCS event will showcase cars weighing more than 1,300 pounds that are capable of generating 700 horsepower. It is the only winged sprint car series that determines its championship with events on both dirt and asphalt racing surfaces.

Grandstand admission for Wind Creek Casino & Hotel Wetumpka Qualifying Night and the USCS Sprint Car Shootout is $20 and kids 12 and under are admitted free with an adult ticket. All infield patrons can watch the race from the grandstand by entering via the turn four pedestrian tunnel or the catchfence opening prior to the start of the sprint car event.

One of the last opportunities of the year to get a personalized custom Coca-Cola® will be at the “Share a Coke” display in Atlanta Motor Speedway’s Fan Zone during the Aug. 29-31 Oral-B USA 500 Weekend.

Throughout the summer, social media and retail locations across the country have witnessed the frenzied search for names on bottles of Coca-Cola, Coke Zero and Diet Coke as part of Coca-Cola’s “Share a Coke” campaign.

The “Share a Coke” display in the Fan Zone will provide patrons the opportunity to participate in the promotion and customize two mini-cans of Coca-Cola® for sharing with a friend, family member or to keep for themselves.