Alex Bowman: A Season of Firsts and Lasts 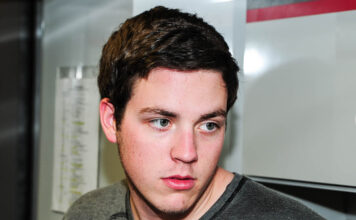 For Alex Bowman, driver of the No. 23 DipYourCar.com Toyota for BK Racing, this season has been one of firsts and lasts.

One of those firsts, in the last race of the season, is that he is competing at Homestead-Miami Speedway for the very first time in his career.

“Definitely the first time I’ve been here,” Bowman said. “The track is really slick, so you slide around a lot. You are definitely chasing the race car at all times and not settled into the track. You’re always working at it.”

“It’s really fun,” Bowman continued. “In race trim, you’re always running right there up against the wall. I like it. It’s been fun for me so far.”

“I’ve just kind of went out, got accustomed to it and adapted myself to the race track before we threw a lot of stuff at the race car,” Bowman said. “We’re not very fast but I think we’ll be alright tomorrow in the race.”

“I feel like at this level, you kind of have to be ready for those first times at new tracks. It’s not the first place that I’ve never been to so I’m definitely used to that. I just have to get up to speed pretty quick and go for it.”

While this is his first time at Homestead, it is the last race of the season and for four other drivers on the track, there is an opportunity for a championship. Bowman acknowledged that this last race where a champ will be crowned will be a first for him as far as how he races as well.

“You just have to stay out of their way,” Bowman said. “They’ll be much faster than us. So, you just have to make sure that you don’t ruin their day because then you’re all over TV and everybody laughs at you and calls you an idiot. I don’t want to be ‘that guy’ that ruins somebody’s championship. Hopefully, we can stay out of the way, not make any of them mad, run our own race and when they’re around, be a little careful.”

Bowman is also experiencing another first, that of having a new crew chief Patrick Donahue named this week for the very last race of the season.

“Well he’s been with us all year, just as a car chief,” Bowman said. “So, nothing’s really new; kind of just the same deal. BK Racing felt like they needed to make a change so I guess Monday I got a text saying Patrick was going to be the new crew chief and we went from there.”

“We’re working on it,” Bowman continued. “We’re not any better than we usually are but we’re not any worse either. All three of our cars are struggling this weekend. Three different set-ups, three different race cars, three different drivers, all not very fast. So, we definitely as a company have our work cut out for us. Hopefully we’ll figure something out before tomorrow.”

Bowman’s other major first is that the finale of his rookie season in the NASCAR Sprint Cup Series is coming to a close. And in the midst of his rookie Cup season, Bowman has also experienced another first, driving for JR Motorsports in the Nationwide Series.

“Getting to drive the 5 for JR Motorsports a couple of times was a lot of fun,” Bowman said. “Last week we were really strong running third but ran out of fuel. Doing this deal helped me get that from Junior and helped show what I can do in lesser equipment to get a shot in good equipment. Hopefully there are more things to come from that and we’ll go from there.”

Bowman has also accomplished a feat for which he is quite proud. He and his No. 23 race team have made all the races for the year, the first time that the team has been able to consistently achieve that.

“Not missing any races was pretty cool,” Bowman said. “Our race team definitely struggled with that and the 23 car didn’t fight that at all.”

The young rookie Cup driver has also had a series of challenges for the first time in his career that he has had to battle, many of which have caused him to even doubt his own abilities somewhat.

“I think my biggest challenge is that when we’re off, we’re really off,” Bowman said. “When we’re bad, we’re really bad. We just need to work on being able to get the race car to not be so bad when we are having an off day.”

“By my standards, every single race has been an off-day,” Bowman continued. “Managing my expectations and learning how to do that has been hard because I’m not used to doing what we’re doing. It’s been a learning experience for me as far as how to approach the weekend. You get down on yourself and it’s really easy to start thinking that it’s the driver and not the race car. You think you’re not doing a good job and then things like last weekend help me reaffirm that I can run with those types of cars. So, it’s been a huge learning experience just to manage my expectations every week.”

Bowman has also learned for one of the first times in his career that he needs to be able to reach out and lean on others as he goes through the ups, downs, and vagaries of the sport.

“Lately, I’ve been talking to Dale (Earnhardt Jr.) a lot,” Bowman said. “Driving the 5 car, we’ve developed a pretty good relationship. Talking to him and just learning different race tracks and different lines has helped me.”

“But as far as getting through the weekend, there are a lot of good people on the race team and are fun to hang out with. They make a situation that is hard to deal with enjoyable.”

While Bowman is looking forward to the off-season, with a particular eye to getting some rest, he also may be marking the last time he will race for BK Racing. In fact, the rookie is uncertain what his future holds at present.

“As far as next year goes, I’d like to be back but I don’t have anything done as of now,” Bowman continued. “I don’t know what I’m doing. I can’t really make up my mind what I want to do so I have to figure it out for myself and go from there.”

For tomorrow, however, Alex Bowman will complete the last race of the season with his first-ever Cup race at Homestead-Miami Speedway. The rookie will roll off for the first and last time in the 41st position for the Ford EcoBoost 400.