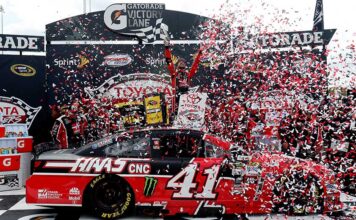 After the rainy Saturday night race turned into a Sunday day race and with remembrances of Steve Byrnes abounding, here is what was surprising and not surprising in the 61st annual Toyota Owners 400 at Richmond International Raceway.

Surprising: As enthusiastically as Kurt Busch threw his arms around crew chief Tony Gibson to celebrate in Victory Lane, Stewart-Haas teammate Tony Stewart threw his helmet and Hans device into his trailer after wrecking into Dale Earnhardt Jr. and wrecking out of the race to finish 41st.

Stewart declined to comment after exiting the care center while Dale Earnhardt Jr. had some interesting words to share.

“Well, it’s never his fault,” Junior said. “I was doing everything I needed to do. I didn’t drive under, I didn’t drive into him, I didn’t move my line at all. He’s gotta take a little ownership in what happened there.”

Busch, on the other hand, had much to say after his first win of the season, one that was especially sweet after sitting out for three races at the beginning of the season due to domestic violence allegations.

“It’s all about team, people, and chemistry within the organization,” Busch said. “So here we are. We’re winners in April. It feels good.

“Plenty of time to do fun things to build the team up, get stronger, learn from all these races coming up and continue to go forward and like Gene Haas (team owner) said, one win is great; I want four or five more.”

Not Surprising: Both Kevin Harvick and Martin Truex Jr. got back to their top-10 winning ways, finishing second and 10th respectively. And both drivers collectively gave total credit to their team and the efforts they put forth in producing the good finishes.

“Well, just really fortunate to have a team that consists of a bunch of guys that do their jobs week in and week out,” Harvick, driver of the No. 4 Jimmy John’s/Budweiser Chevrolet, said. “I think we’re a better team than we were last year, just for the fact that those guys are just such a tight knit group of people.

“I tell people all the time it’s very special to be a part of a team that knows what to do with each other without even having to say anything and that’s really what makes it go around.”

Just as Harvick did, Martin Truex Jr. also credited his team, the No. 78 Furniture Row/Visser Precision Chevrolet for his top-10 comeback.

“It was a struggle out there, but we made the car better and picked up enough spots to get another top 10,” Truex said. “We’ve made some late-race charges a few times this season and it’s a good feeling to know that we have the ability to overcome these issues.”

“Once again I am proud of this team for bringing fast cars to the track.”

Harvick and Truex Jr. also had one other commonality, with both holding serve on their first and third place in the point standings.

Surprising: Joey Logano took the ‘quote of the day’ honors, with his remarks after taking it four-wide with Jeff Gordon late in the race.

“I just got in there and closed my eyes and hoped for the best.”

Logano ended up finishing fifth in his No. 22 Shell Pennzoil Ford and was by far the highest finishing Ford. In fact, the next finishing Ford was his Penske teammate Brad Keselowski, who finished 17th after being down a cylinder.

Not Surprising: Jamie McMurray, who has been running strong all season, broke into the top 10 in the point standings with his fourth-place finish at Richmond.

“When I look back at our race today, you go home and lay down tonight and you think about everything, I really — there’s nothing that I could have done any better,” the driver of the No. 1 Energizer Chevrolet said. “I just didn’t have a car that was quick on the short run. I had one that would go at the end.”

“When I look back at those restarts, if I could have gotten ahead of him, I still don’t know I could have held him up.”

“I thought as a team, driver, crew chief, we did a really good job today.”

Surprising: While Brett Moffitt in the No. 55 Aaron’s Dream Machine Toyota was the official ‘Rookie of the Race’ finishing 29th, Chase Elliott, in just his second Cup start, finished 16th in his No. 25 NAPA Auto Parts Chevrolet.

“Yeah, overall I felt like we had a really solid day,” Elliott said. “Really the whole weekend for us here on the Sprint Cup side was solid. I thought we had a good car throughout practice, was able to run well in race trim, and our real struggle was trying to go fast for qualifying. Guys made good adjustments for qualifying to get us in the show, and our car today had great long-run speed.”

“Unfortunately these races never ran to the long run. It’s always going to be a short run to the finish, and I didn’t tell them to do the right things for that last stop to run a short run.”

“Lesson learned, and we’ll try to get better for the next one.”

Not Surprising: While a top-10 finish for Kevin Harvick means Bloomin’ Onions for all at Outback Steakhouse, Jeff Gordon’s top-10 finish meant even more.

The Jeff Gordon Children’s Foundation tweeted after the race “Way to go @JeffGordonWeb another top 10 finish and $1,000 for childhood cancer research.”

Gordon also achieved another career milestone in his final season. He officially tied former driver Mark Martin for the most lead lap finishes, 558, in fact, in NASCAR Cup Series history.

Surprising: Danica Patrick took so many licks but kept on ticking, holding on to finish 25th. Early on in the race, in fact on Lap 5, she and Casey Mears tangled. And although she went sliding, she controlled the car well enough that the yellow flag was not displayed.

She also battled with Trevor Bayne, as well as Aric Almirola the latter of whom knocked Joey Gase around and almost right into Patrick’s No. 10 GoDaddy Chevrolet.

Finally, Patrick also had a bit of a run in off the track, tangling with Clint Bowyer on pit road. As she was entering her stall, Bowyer hit her left rear quarter panel, sending her sideways and almost into her pit crew.

Not Surprising: All four drivers in the Hendrick Motorsports stable finished strong, with Jimmie Johnson in third, Kasey Kahne in sixth, Jeff Gordon in eighth and Dale Earnhardt Jr. bringing up the Hendrick rear in the fourteenth position.

But it was Johnson and Kahne who had to start from the back of the field, 36th and 40th respectively to earn their top-10 finishes.

“We had a great race car and I really felt like that was the case on Friday, except for our qualifying lap,” Johnson said. “With all the long runs that we had, I was able to get through the field and get this Lowe’s Pro Service Chevy up front. Those last few restarts I was able to hang on and duke it out with those guys and get a nice top three finish.”

“It was pretty inconsistent and there were good runs and bad runs,” Kahne said. “For whatever reason on that last run was really good. I was happy with the way the day ended up.”

“I would say our best race of the year there, at least it felt like one of our better ones. I’m glad we finished strong today because the second to last run was a really bad run. I’m glad the final run we got the right set of tires on.”

Surprising: Matt Kenseth, and not Denny Hamlin who had won the Xfinity race in a dominating fashion, represented Team Toyota as the highest finisher for that manufacturer in the seventh spot.

“For us overall, it was pretty good,” Kenseth, driver of the No. 20 Dollar General Toyota said. “We had some runs that were really, really good, some runs were off. Didn’t have the best restart positioning there at the end and got what we could out of it.”

“We were pretty happy with our FedEx Toyota Camry two days ago — not so much today. Just we missed it,” said Dave Rogers, crew chief for Denny Hamlin, said. “Made a few adjustments and obviously went the wrong way.

“We had a good car a couple days ago, but not so good today.”

Not Surprising: In spite of tangling with Danica Patrick on pit road and suffering some right front damage, as well as trading paint with Martin Truex Jr. late in the race, Clint Bowyer still managed to pull off a top-10 finish at one of his favorite tracks.

“It was kind of tit for tat really,” Bowyer said of his contact with Truex. “We were racing hard there with 20 to go and he comes from the outside and crosses over and he kind of dive bombed me last minute. It really kind of scared me, so I gave him the spot and then fast forward one lap, exactly the same move back and he turned back down and I was already there and I got into him a little bit. It is what it is.”

“We clearly need to be better,” the driver of the No. 15 AAA Insurance Toyota said. “Hell, after the start of the season we’ve had, it’s starting to feel like a little bit of momentum and we’ve just got to keep digging.”