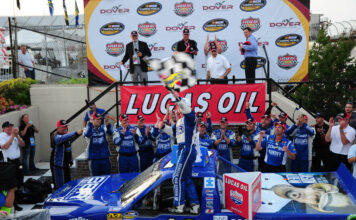 Tyler Reddick, driving the No. 19 BBR Music Group Ford for Brad Keselowski Racing, burned down Monster Mile’s house and headed to Victory Lane for the second time this season. Reddick took the lead late in the race and never let go to take the checkered flag in the 16th annual Lucas Oil 200.

This was also Reddick’s first win at the infamous Monster Mile.

“We worked really hard for this,” Reddick said. “I knew we had a top-five truck at the start of the race. It’s great to get a win for everybody back home and a great way to get the season started for us.”

Owner Brad Keselowski was also very proud of his young driver, especially since he is in contention for the championship just eleven points shy of leader Matt Crafton.

“It certainly was a great day but for us and it was kind of a landmark day,” Keselowski said. “We’ve got a lot to be proud of and we’ve got our focus on the championship. Tyler ran a partial season last year and a full season this year but it’s still his first season. So, it’s nice to see that come together the way it has and it’s going to be an exciting finish from here.”

“There is a lot of racing left to do but I think you saw today that there are so many great competitors out there. The championship battle will come down the end and these wins are going to make the difference.”

Reddick’s win was not without controversy as he had a run in with Jennifer Jo Cobb, who was incredibly annoyed and expressed her anger by staying on the track and sharing a gesture or two before taking the obligatory ambulance ride to the care center.

“We were in lap traffic early on in the race and Jennifer pulled up as I was trying to pass another vehicle,” Reddick said. “She looked like she was going to get me three-wide and then she closed the door.”

“So, I rode up to try to avoid getting in the back of her but she just got loose when I was right behind her and ended up spinning. It’s a real shame and I understand when something like that happens”

“I just feel really bad for her for that happening to them and their team.”

Daniel Suarez, behind the wheel of the No. 51 ARRIS Toyota, finished second in the race. This was his first top-ten finish at Dover and his fifth top-10 finish in 2015.

“Well for sure the whole of 2015 so far has been different from my 2014,” Suarez said. “I’m very lucky. To have fast race cars every weekend is just great.”

“I feel like I’m learning a lot every single weekend. Kyle (Busch) has been helping us as well. We are getting closer and closer.”

The most disappointed driver yet one who finished in the third spot was Erik Jones, whose two-tire strategy simply did not pan out the way he wanted.

“I was in on the call and we just didn’t have the time left. It was a solid day for us but it’s just a shame that we couldn’t bring it home,” Jones said. “It’s definitely frustrating and even more frustrating at this moment.”

“It just really hurts being that close to a win and it’s a bummer for this race team. But we made a call to take two and that was a lot of laps on lefts. And it showed at the end.”

“We’ll take it and move on and just keep getting better.”

Jones was the highest finishing rookie of the race.