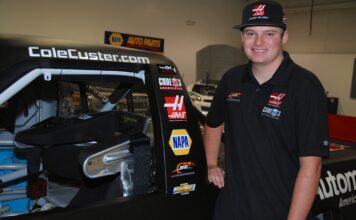 While Danica Patrick may just have scored a brand new sponsor for the next race season, Stewart Haas Racing has another unique sponsor relationship with a nonprofit organization by the name of Code 3 Associates.

This week’s NASCAR Behind the Scenes takes a closer look at Code 3 Associates, their unique synergy with an elite NASCAR team, and their new relationship with up and coming driver Cole Custer.

“Code 3 was a company that I will readily admit that I half-heartedly started in the 1980s when I was a police officer,” Eric Bagdikian, President, Code 3 Associates, said.  “Right around the mid-1990s, my wife Nan Stewart had retired off the road as a California state humane officer and was in very high demand to teach and consult.”

“So, Code 3 became the perfect platform for her to work off to do that. She has really been the driving and passionate force behind Code 3 Associates.”

“As things developed, Code 3 branched out into two areas,” Bagdikian continued. “My wife and a former partner saw a need for animal welfare and care in times of natural disasters. At the time, there was little or nothing in the federal incident command structure has various different emergency service functions (ESFs). At that time, the realization of animals as part of the family was just coming out into the open as part of that protocol.”

“Nan and my partner saw this but also saw the need for a tool, which gave birth the BART, our 82-foot hauler, known affectionately as the Big Animal Rescue Truck. It literally houses everything that operators and responders are going to immediately need to respond to the needs of animals in a disaster.”

“The other side of the company that developed concurrently, because of Nan’s expertise, was training. At the time, there were only a few organizations that specialized in animal control training. This has become more important now because training is the first line for liability and risk management.”

“So, over the years, Code 3 has continued to develop in this area. One of the bigger animal control organizations was National Animal Care and Control Association (NACA) and Code 3 ended up joining forces.  So, that is how Code 3 Associates came about and has evolved.”

Code 3 Associates also has a very unique story when it comes to their involvement in NASCAR.

“We have a benefactor who has a very, very strong interest in animals and are big NASCAR fans,” Bagdikian said. “Putting the two together, we are able to combine their passions, get into NASCAR and provide a cause to apply to that interest.”

“We looked at various different teams and drivers but back in the early 2000s Code 3 received an unsolicited donation of $500 from the Tony Stewart Foundation. The craziest things happen from the smallest seeds. So, that was the link. We approached Stewart-Haas Racing and it was the perfect recipe.”

“At the time Ryan Newman was one of the drivers on the team and of course Tony Stewart. They both have a very strong interest in animals. They both love animals. And Tony operates his Foundation, which provides for animals and/or children.”

“So, that’s how it all came about. It was a synergy that was waiting for a catalyst. It just so happened that Code 3 was the catalyst. We met with the VP of Business Development for SHR and we were truly amazing at his reaction to the synergy. Stewart-Haas has taken an active interest in what we are doing in almost a daily basis. They have been very supportive of Code 3 and animal welfare issues in general.”

Code 3 Associates and Stewart-Haas Racing also combine their missions in very down to earth unique ways.

“Code 3 holds a couple of training sessions at the race shop during the year,” Bagdikian said. “And that’s been at Stewart-Haas insistence. But they do have one complaint because when we are there all of the workers want to come out of the shop and play with the animals.”

“They’re not getting much done, but their frame of mind is much better when they get back to work!”

One of the most unique aspects of the Code 3 Associates partnership with Stewart-Haas Racing is their interest in the development of a seventeen-year-old racer Cole Custer.

Cole is a very bright, well-educated, outgoing young man. You don’t get that from him initially, but he is. And he really cares,” Bagdikian said. “When we initially started talking about this, Cole does bring the young element to the table.”

“And in my opinion, we have sold that generation short. I’ll call them kids, but that generation does care. They really do want to help. Cole is emblematic of that. NASCAR really needs to culture that generation into their fan base. So, it’s a perfect platform for that generation’s passions to also make that bridge to NASCAR.”

“I am a firm believer that as each day, month, year goes by, that representation will be more and more present. If we can help him grow and develop and benefit this cause, we are all for it.”

The most important partnership for Code 3 Associates is that they are fulfilling their mission with a long-term commitment to drivers like Cole Custer and teams like Stewart-Haas Racing.

“One of the things that I like is that drivers like Cole are coming in with no sense of entitlement,” Bagdikian said. “The vast majority of them have had to compete. Yeah, it’s all fine and well to say you are part of a team, but when you’re out on the track you are competing for yourself.”

“Cole has really worked and honed his craft with diligence and determination. I think this is one thing that really separates our sport from others as far as our up and coming athletes.  There are not scholarships. They have to come up on their own merits. The recruitment opportunities in our sport are not as prevalent as in other sports.”

“So, I definitely I think we are in for the long-term with this NASCAR relationship.”

For more information about this unique organization and its NASCAR commitment, check out www.Code3Associates.org.