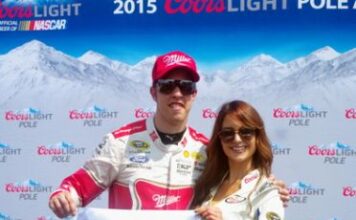 DARLINGTON, S.C. – With two races left before the start of the 2015 Chase for the NASCAR Sprint Cup, Brad Keselowski got the momentum builder he needed with Saturday’s pole-winning effort at Darlington Raceway.

The Coors Light Pole Award was Keselowski’s first of the season, his first at Darlington and the ninth of his career. The 2012 NASCAR Sprint Cup Series champion has but one top five to his credit in six previous starts at the track “Too Tough to Tame,” but NASCAR’s switch to a low-downforce configuration for this race seemed to suit the driver of the No. 2 Team Penske Ford.

“For my team, we haven’t had, to date I would say, as strong of a year as what we had last year, and I think that kind of wears on everybody a little bit, including myself,” Keselowski said. “But I feel like we have positive momentum, and you always want to see results that showcase that, and this is one of those results that I feel like we can carry for the next 12 weeks.

With tire fall-off a clear reality at Darlington, Busch set the fast speed of the time trials in the first round, running 179.501 mph to edge Ricky Stenhouse Jr. (179.389 mph) by .017 seconds. Through each subsequent round, the top speeds declined as tires accumulated wear, with Keselowski leading both the second and final sessions, the latter of which determines the pole winner.

“I feel a lot better about it in race trim than I did in qualifying trim,” said the reigningSprint Cup champion. “We try to concentrate on that the most because there is so much falloff. The cars are going to slide around so much that I really feel like the cars need to be as manageable as you can make them throughout the night.

“It’s really not about the first two or three laps. You’ve got to be able to stay in there and be able to maneuver your car and be comfortable and keep it off the wall for at least 400 miles so that you can be around at the end. So, we’ll try to take care of our car and make sure we do everything right and get our car adjusted so that we’re ready for the last 100 miles of the race.”

There was plenty of suspense throughout the three rounds of knockout qualifying.Denny Hamlin, pole winner for Saturday’s NASCAR XFINITY Series race at the Lady in Black, had to bump his way into the top 24 late in the opening round.

Three-time Darlington winner Jimmie Johnson was the last driver to punch a ticket to the second round, bumping Matt DiBenedetto by .009 seconds for the 24th spot. But Johnson’s run ended with a 19th-place run in the second session.

Trying to squeeze enough speed out of her No. 10 Chevrolet, Danica Patrick tagged the outside wall during her final run in the first round, forcing the team to roll out a backup car. Accordingly, Patrick will start from the rear of the field on Sunday.

Fast in Friday’s practice, Greg Biffle also sustained damage to his No. 16 Ford after contact with the wall in the second round. Biffle was credited with a 24th-place qualifying effort, and his team opted to try to repair the car, rather than resorting to a backup.