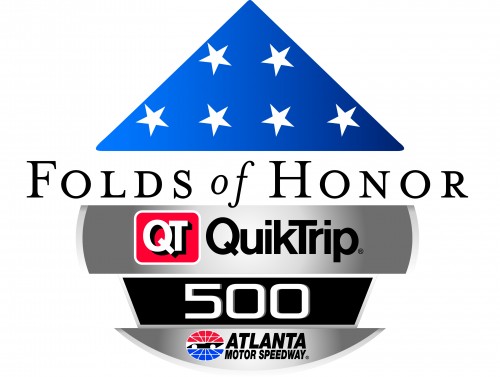 HAMPTON, Ga. (Feb. 26, 2016) – Chevrolets will fill the front row for Sunday’s Folds of Honor QuikTrip 500 at Atlanta Motor Speedway as Kurt Busch drove his No. 41 Monster Energy/Haas Automation Chevrolet SS to the pole position for the second race of the NASCAR Sprint Cup Series season.

Busch claimed his first career Atlanta pole Friday with an average speed of 191.582 mph. A three-time winner at the 1.5-mile track, Busch was one of four Chevrolet drivers to qualify on the first two rows.

“It’s an awesome run that the car had in it,” said Busch, who is on pole position for the 20th time in his NASCAR Sprint Cup Series career. “The team did a good job to dial it in for the three rounds. I was just trying to make sure I didn’t slip a tire any extra. It’s really easy to overdrive Atlanta Motor Speedway. The track challenges the driver, the car and the tires. It’s a fun place to come and try to lay down a lap.”

Chevrolet won its 25th all-time pole position at Atlanta. Team Chevy drivers will look to give the Bowtie Brand its 40th victory in 109 events at the track just south of Atlanta. Chevrolet drivers have won two of the last three races at Atlanta Motor Speedway.

Jamie McMurray in the No. 1 McDonald’s Chevrolet SS will start alongside Busch as Chevrolet swept the front row for the first time at Atlanta since 2008 (Jeff Gordon and Dale Earnhardt Jr.). McMurray’s average speed Friday was 190.130 mph.

Busch and McMurray had qualified second and third before Kyle Busch’s time in the No. 18 Toyota was disallowed following post-qualifying technical inspection.

Busch was one of six Team Chevy drivers to make the final round of qualifying – half of the 12-car shootout for pole position. Ryan Newman in the No. 31 Caterpillar Chevrolet SS will start fourth with an average speed of 189.961 mph.

Kevin Harvick, the 2001 race winner and driver of the No. 4 Jimmy John’s Chevrolet SS, qualified sixth with Austin Dillon eighth in the No. 3 DOW Chevrolet SS. Kasey Kahne was 11th in qualifying with his No. 5 Panasonic Chevrolet SS.

All the raceday excitement from Atlanta Motor Speedway and the Folds of Honor QuikTrip 500 is scheduled to begin at 1 p.m. ET on Sunday. Live coverage will be available on FOX, PRN Radio, Sirius NASCAR Radio Channel 90 and NASCAR.com.

ON BEING THE POLE SITTER AND POST QUALIFYING INSPECTION:

“It’s an awesome run that the car had in it. The team did a good job to dial it in for the three rounds.  I was just trying to make sure I didn’t slip a tire any extra.  It’s really easy to overdrive Atlanta Motor Speedway.  The track challenges the driver, the car and the tires.  It’s a fun place to come and try to lay down a lap.

“Overall with the way the developments came up from tech inspection this shows the amount of enforcement that NASCAR is ready to apply their technical procedures on what a car has to do to comply to all specs.”

TALK ABOUT HOW YOUR CAR HANDLED DURING THE QUALIFYING SESSION AND YOUR THOUGHTS ON THE NEW LOWER DOWNFORCE PACKAGE:

“I was really happy with today’s effort.  It’s always interesting spending 10 day to two weeks down in Daytona and then showing up here and having 80 minutes more or less to dial the car in.  It was neat to see all the crew members on the Monster Energy/Haas Automation Chevy in sync and ready to go.  A few guys made the comments too.  Like ‘hey we are in a nice rhythm already’ and it feels good to be communicating like this.  It was like the car is fast guys, let me go out there and loosen her up a little bit for this last run and let me try to deliver.  Just have to thank the guys for their hard effort and the way that everybody worked through today.  Three consistent laps all three rounds.  The car is showing its speed and now we have to settle back in on what we learned from today in q-trim and dial it in for race trim.”

IS IT MUCH MORE IMPRESSIVE TO YOU TO BE CONSISTENT ROUND AFTER ROUND AS OPPOSED TO GOING OUT AND THROWING UP A HUGE LAP?
“Yeah, the money round is round three and you are working towards that through each of the rounds, but round two is, I think, the most treacherous for the overall effort for the day.  If you mess up in two, like Kyle Larson did, he doesn’t make the final round when he had the fastest car in practice.  It’s hard.  You have to manage it as a driver and you have to manage the tires and communicate to the crew on what you think you need through each of the rounds.  In that last round you’ve got to let it all hang out there because the worst you are going to end up is 12th, but it would be great to get a pole.  Second through 12th is like ‘eh’.  The pole sitter gets that satisfaction of going and getting that pole victory.  We are on the front row.  Monster Energy – first race for them on the hood, it’s going to be a great year.”

DID YOU GET MUCH OF A FEEL FOR THIS LOW DOWNFORCE PACKAGE?
“The low downforce sent most of the teams, from what I could hear as far as chatter on the radio, in two directions today.  A lot of tight cars when they first unloaded and a lot of loose cars in qualifying trim.  So, it just put a stronger emphasis on narrowing down on what is the exact problem. Lack of downforce just makes cars drive awkwardly.  You have to work around that.”

HOW IMPORTANT IS STARTING POSITION HERE AT ATLANTA?
“In 2009 I won the race starting up front, so let’s do that again.  Let’s cash in.  Let’s make 2009, 2016 and get the job done on race day.  That is the biggest thing.  Once these tracks rubber in and we are out there slip, sliding around it’s all about team communication and how I can assist them in making pit calls.  As well as, they can assist me and help me get the best lap time out of the car.  Really looking forward to getting the most we can out of the early part of this season with this low downforce package.  Honestly, the cars are just slip, sliding around and tomorrow’s practice we will have a larger indicator once you see everybody put that final set of stickers on.”