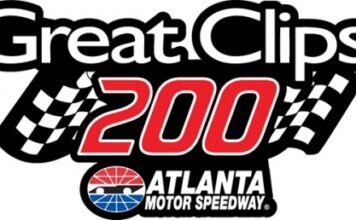 CAMERON HAYLEY, No. 13 Cabinets by Hayley Toyota Tundra, ThorSport Racing
Finishing Position: 2nd
Did you have anything for the winner at the end?
“I think I did and I’m beating myself up a little bit. It was a great run for our Cabinets by Hayley Tundra – best-career finish. I can’t complain about that, but I just know in the back of my head if Matt Crafton was in my truck, he could have won that. I just – I needed a run a little bit harder, but great run to start up this year. This was my hardest track all year. I needed to get this one over with and to come out of here second I’m pretty happy with the team and proud of everything Toyota, everybody has done for me. It’s just an amazing start to the year.”

What could you have done differently?
“I was just afraid to go to the high side there in one and two. I think I could have gone high, got a run on John Hunter (Nemechek) getting down the back straight and maybe passed him into three and four. I was just – my truck was not that great on the outside all day and I was just afraid that if I went up there, I’d lose more positions than I was going to gain, but that’s just part of learning and something I need to learn.”

What did you see from inside your Tundra when the wreck occurred?
“There was a lot off wrecking in front of me and we almost got in the wreck. I think one major heart attack in there I’m still trying to recover from, but at the end there our Cabinets by Hayley Toyota Tundra was really strong. We definitely had an up-and-down day, had the right front almost blow there at the beginning of the race, but overall great run for our guys. They work so hard – Toyota, TRD (Toyota Racing Development), Triad, Cabinets by Hayley – all these people who help get me here. It’s just a good run for our team at the start of the season.”

TIMOTHY PETERS, No. 17 Red Horse Racing Toyota Tundra, Red Horse Racing
Finishing Position: 3rd
How was your race?
“We think we had a Red Horse Tundra that could win this race. We were able to catch the vibration with our right front cording on us. Had to come down to pit road. Shane (Huffman, crew chief) made great calls. The pit crew did awesome not only getting me back out to where we were only one lap down, but all race long they gained us spots, gained us spots, gained us spots. For the laps on our tires and to fight back through adversity, I’ll take it.”

BEN RHODES, No. 41 Alpha Energy Solutions Toyota Tundra, ThorSport Racing
Finishing Position: 6th
How was your race?
“Traffic – it just couldn’t run in traffic and that’s something we’re all going to go back to the shop and work on and work with Toyota on. We had a bad fast Tundra, but the problem was just trying to get around people and we worked on it, worked on it, worked on it. We got the balance a little off and got it too loose towards the end, fell back, started making our way back to the front and once again had some issues in the air. But the good news is that we came home with a sixth-place finish. It could have been a lot worse – a lot of bad stuff happening again. It felt like Daytona all over again and we were in the middle of a wreck and somehow made it through. Just really thankful for everybody that’s behind me – Alpha Energy Solutions, Refrigerant Rescue, Alliance Comfort Systems and ThorSport Racing for putting some awesome trucks together and all that they do.”

MATT CRAFTON, No. 88 Hormel/Menards Toyota Tundra, ThorSport Racing
Finishing Position: 30th
What did you see that caused the accident?
“They said the 4 (Christopher Bell) just lost it and hooked the – got the 51 (Daniel Suarez) in the right rear and just turned him dead sideways into me and a little long ride down the back straightaway when you didn’t know if you were going to get hit in the driver’s door. It was a pretty solid shot, but like I said hands down to NASCAR for having all these SAFER barriers and everything around this race track, but it’s a shame because this Menards Toyota Tundra was so, so fast.”

DANIEL SUAREZ, No. 51 ARRIS Toyota Tundra, Kyle Busch Motorsports
Finishing Position: 31st
Are you okay after the accident?
“Yeah, I’m good. There is not a lot to say. I think it’s pretty plain – our teammate (Christopher Bell) turned us around. I don’t know why. We had a difficult day learning about everything and building chemistry with my new crew chief with Bono (Manion). We were doing an amazing job. The truck was the fastest by far our there. We made some adjustments right there at the end – the truck was super-fast again. I understand that this happens, but between teammates I always think that we – we just have to take care of each other a little more.”

WILLIAM BYRON, No. 9 Liberty University Toyota Tundra, Kyle Busch Motorsports
Finishing Position: 32nd
What ended your race?
“Yeah, it’s just unfortunate we blew a motor, so nothing we could really do, but thankful for all my KBM (Kyle Busch Motorsports) guys. We had a really fast Toyota Tundra. We came from 15th – we started 15th and got to second there and just needed a few adjustments, but we were going to be there. Just can’t thank Liberty University enough for being on board and we’ll get them at Martinsville.”