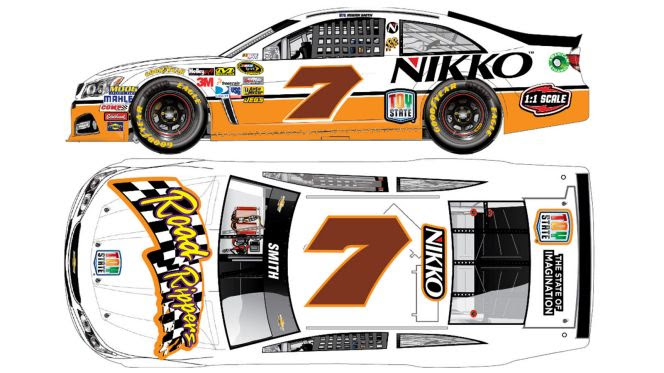 Smith, the 2011 winner of the Southern 500, said of his paint scheme honoring Kulwicki, “It is a neat deal for me, I grew up watching him, Davey (Allison) and Bill (Elliott) battle it out for the ’92 championship. I am really looking forward to getting the No. 7 Road Rippers/Toy State Chevrolet on track Labor Day weekend.”

“We’re proud to be part of such a unique promotion that helps connect fans to the history of NASCAR,” said Toy State President, Andy Friess. “It’s a privilege to recognize Alan Kulwicki as a champion, and as a man admired by so many, both inside and outside of the sport.”

“It’s an honor for us to pay tribute to a true champion of our sport,” said team owner Tommy Baldwin. “Sharing the car number is a great way to celebrate his accomplishments, it is even more special because Alan achieved success as an independent team. We’re grateful to Darlington Raceway and NASCAR for giving us such a special platform.”

Founded in 2009, Tommy Baldwin Racing is a NASCAR organization that fields the No. 7 Chevrolet driven by Regan Smith in the NASCAR Sprint Cup Series. Baldwin, a native of Long Island, New York, is a Daytona 500-winning crew chief in his eighth season as a full-time Cup Series car owner.
For more information on Tommy Baldwin Racing, please visit them on Facebook, Twitter or their website.