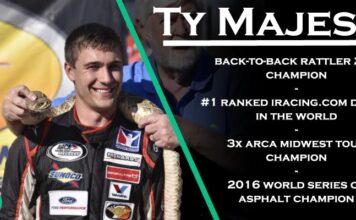 “To win back-to-back in one of the biggest super late model races in the country is really special,” said Majeski.  “The best teams and drivers in the country come to that race every year.  Winning back-to-back is a testament to what my team and I have been able to do over the last three years.”

The result was the same, but this year’s victory stands in contrast to a race that Majeski dominated in 2016, leading all but eight laps.  In just his third start in the Rattler, Majeski took the lead for the first time of the day with only 18 laps remaining.

The win puts Majeski in elite company, as he is just the second driver to win the Rattler back-to-back, and only the fourth driver to win more than one Rattler 250.

“This is a prestigious race that’s been around a long time, “said Majeski.  “It’s one of the premiere super late model races in the country.  It’s the first race of the season for the Southern Super Series, so it’s kind of their Daytona 500.  The competition at that race is as good as it gets in super late model racing.  It’s something that not a lot of people have been able to accomplish, so it’s definitely pretty special to have that under our belt.”

Majeski boasts ARCA Midwest Tour Championships in 2014, 2015 and 2016 and was one of 11 drivers named to the NASCAR Next 2016-17 class.  Majeski, a senior in mechanical engineering at the University of Wisconsin-Madison, was chosen as the number one pick in Speed 51’s 2016 Short Track Draft.

Starting his racing career in go-karts at the age of nine, Majeski holds the Snowball Derby track record at Five Flags and has earned many of late model racing’s biggest wins, including the 2015 and 2016 Governor’s Cup and 2016 World Series of Asphalt Championship at New Smyrna Speedway.

In 2015, Majeski was one of seven drivers to compete in the first-ever class of Kulwicki Driver Development Program (KDDP). Majeski not only excelled during his on-track performances – earning the maximum number of points in the competition – but also showed his dedication to the KDDP in how he represented the program off-track. In establishing his own driver development program for young go-kart drivers, Majeski highlighted the organization’s mission to serve young talent. Majeski’s outstanding performance in the KDDP led to him being crowned the inaugural Kulwicki Cup Champion for 2015.

Later this season, Majeski will make his NASCAR XFINITY Series debut behind the wheel of a Roush Fenway Ford at Iowa Speedway on June 24.

“I’m really excited about our upcoming XFINITY races at Iowa later this summer,” said Majeski.  “It’s something that I’ve been working for since I started racing at nine-years-old.  It’s definitely a dream come true.  It’s cool that I’ll be racing in the Mid-West.  My friends and family, and my entire super late model team will be there.”