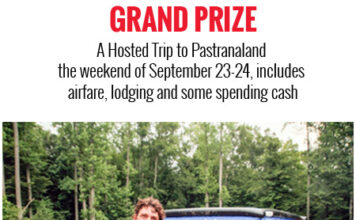 IRVINE, Calif. (June 20, 2017) – Taking its cue from the action sports star’s years of iconic “hot dog” moves, Wienerschnitzel is giving one lucky fan the opportunity to visit – and even learn tricks from — professional racer and stunt performer Travis Pastrana at “Pastranaland”, his Davidsonville, Md., home and freestyle training center.

In addition to the Grand Prize of a hosted trip to “Pastranaland” the weekend before his return to NASCAR (Sept. 23-24), including airfare, hotel accommodations and some spending cash, fans can win the second prize of a trip for two to Las Vegas to see Pastrana compete in the NASCAR Camping World Truck Series Race.

The World Largest Hot Dog Chain® has launched the “#Pastranadog Sweepstakes” (www.wienershnitzel.com) as part of the company’s sponsorship of the eleven-time X-Games Champion appearance at the Sept. 29 NASCAR Camping World Truck Series Race at Las Vegas. Pastrana will be racing his No. 45 for Niece Motorsports.

“This is a partnership made in action sports heaven,” said J.R. Galardi,Wienerschnitzel executive vice president. “Travis loves hot dogs and Wienerschnitzel fans love Travis – so we knew we had to bring the two together. It was actually Travis’ idea to offer one lucky fan the chance to visit him in his one-of-a-kind backyard. Who knows – he may even throw in a riding lesson or two.”

To celebrate the contest and his partnership with Wienerschnitzel, Pastrana will be serving the chain’s legendary Chili Dogs, Corn Dogs, Chicken Schnitzel Sandwiches, Tastee Freeze desserts and other menu favorites during a 1.5-hour restaurant takeover on June 22 at the Wienerschnitzel at 3145 West 3500 South in West Valley City, Utah, eight miles southwest of Salt Lake City.

According to Galardi, Travis will be in Salt Lake City for the June 24 Nitro World Games at Rice-Eccles Stadium and jumped at the chance to spend time with local customers while contributing to a larger cause. “In between his cooking and serving duties, he’ll be signing autographs, posing for pictures and hanging with his chili dog-loving fans.”

Wienerschnitzel will donate all proceeds generated during the takeover to the Road 2 Recovery Foundation, a nonprofit organization providing professional motocross/supercross athletes with financial assistance and motivational, emotional and spiritual support after they sustain career-ending injuries.

As an only-at-Wienerschnitzel bonus, fellow Nitro Circus Tour, X-Games and BMX athlete Andy Buckworth will help Travis behind the counter and perform a few bike tricks in the parking lot and on the restaurant’s iconic yellow A-frame roof.

To enter the “#Pastranadog Sweepstakes” participants must complete an entry form at www.wienerschnitzel.com through August 20. There is no purchase necessary to enter. See website for full sweepstakes rules.

Founded by John Galardi in 1961 with a single hot dog stand in Wilmington, Calif., Wienerschnitzel (www.wienerschnitzel.com) is one of the real pioneers of the quick-service food industry. Having successfully carved out a niche with hot dogs, The World’s Largest Hot Dog chain serves more than 120 million hot dogs annually. Based in Irvine, Calif., Wienerschnitzel operates or franchises 331 stores in 10 states and Guam. It is part of the Galardi Group, which is also the parent company of The Hamburger Stand and Tastee-Freez LLC.