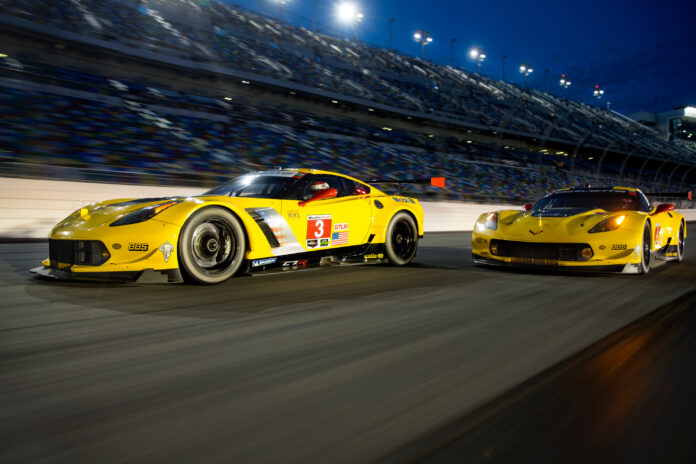 DETROIT (Jan. 2, 2018) – A new calendar year also brings a new season for Corvette Racing in the IMSA WeatherTech SportsCar Championship. It all begins this weekend at the annual Roar Before the 24, which serves as a prelude to the Rolex 24 At Daytona and opening round of the IMSA season.

For Corvette Racing, the three-day test is a chance to gear up for its chance at a fourth class victory at the twice-around-the-clock endurance race at Daytona International Speedway. Both Chevrolet Corvette C7.Rs will be on-track along with its full complement of three drivers in each car.

Defending GT Le Mans (GTLM) Antonio Garcia and Jan Magnussen team up again with Mike Rockenfeller in the No. 3 Mobil 1/SiriusXM Chevrolet Corvette C7.R. In the No. 4 Corvette, full-season teammates Oliver Gavin and Tommy Milner will drive with Marcel Fässler in hopes of replicating their 2016 class victory.

Corvette Racing celebrates its 20th season of competition in 2018 – longevity not matched by any other team in the IMSA paddock. The Chevrolet/Corvette Racing partnership is the most successful in professional North American endurance racing with 98 victories in the United States and Canada. Add eight Le Mans victories, and Corvette Racing’s global tally is 106 during the last 19 seasons.

The roll of honor for Corvette Racing also includes 12 Manufacturer and Team championships, as well as 11 Driver titles. In 2017, Garcia and Magnussen won three times and won their second IMSA title together. Gavin and Milner also posted a victory of their own last year.

Since the start of the 2014 season – the first under the ALMS/GRAND-AM merger – no manufacturer or team has won more often in the WeatherTech Championship than Chevrolet and Corvette Racing. Team Chevy has 35 victories with 15 coming in GTLM with Corvette Racing.

The Rolex 24 served as the first event for the Corvette Racing program in 1999, and one of the team’s Corvette C5-Rs finished fourth. Two years later, Corvette Racing won the race overall. Fast forward to the current era, and the program added class victories in both 2015 and 2016. The latter was the thrilling 1-2 finish that saw the No. 4 Corvette beat its sister entry by just 0.034 seconds.

That is just one of more than 40 victories for Chevrolet across all motorsports events at Daytona, making it the most successful manufacturer at the World Center of Racing.

ANTONIO GARCIA, NO. 3 MOBIL 1/SiriusXM CHEVROLET CORVETTE C7.R: “It has been a busy period since the end of last season. Corvette Racing has put a lot of effort into testing for our 20th season in 2018 – both on the track and in our simulator. We can make use of every piece of data we can find. Hopefully that helps us at Daytona. We were disappointed not to win last year’s Rolex 24 after we led twice after pit stops in the final hour. After missing just a little pace then, I hope we can find what we need after these three days of testing.”

JAN MAGNUSSEN, NO. 3 MOBIL 1/SiriusXM CHEVROLET CORVETTE C7.R: “With everything we accomplished last year, one of the disappoints we had was not winning Daytona. So we will go into the Roar with that goal in mind. We are there for three days but there is a huge amount of items we need to run through for the Rolex 24. Winning there would be the best way to start Corvette Racing’s 20th year.

MIKE ROCKENFELLER, NO. 3 MOBIL 1/SiriusXM CHEVROLET CORVETTE C7.R: “It will be great to get back in the Corvette C7.R at Daytona. As a team, we have a lot to work toward to give both our cars the best possible to chance to win this race. That means we need to get everything we can out of testing this week. I am continually impressed by the level of racing in GTLM with the number of great manufacturers, drivers and teams. So it is imperative we start strong with a good showing at the Roar.”

OLIVER GAVIN, NO. 4 MOBIL 1/SiriusXM CHEVROLET CORVETTE C7.R: “I’m very eager to get this year started off right. Tommy, myself and everyone on the No. 4 Corvette side want to put last season out of our minds and focus on having a good, positive weekend at the Roar. This stands to be a big year for Corvette Racing… our 20th season and going for three straight GTLM championships. Checking off all the items on our testing list would be a great start.”

TOMMY MILNER, NO. 4 MOBIL 1/SiriusXM CHEVROLET CORVETTE C7.R: “This is a huge year for everyone at Corvette Racing. It’s our 20th season and from the competition standpoint, this will be the biggest challenge we’ve faced. There’s additional motivation for our side of the garage after last season’s tough going. The best thing about our team though is the talent and experience we have working together for so many years. We need to use that advantage this weekend to get us in the best possible shape heading into the Rolex 24.”

MARCEL FÄSSLER, NO. 4 MOBIL 1/SiriusXM CHEVROLET CORVETTE C7.R: “I’m ready to get back to the track with Corvette Racing. Daytona is a big event and one that we have been lucky to win before. For me personally, my comfort level in the Corvette is higher than it has ever been. I was fortunate enough to participate in a couple of test days after the 2017 season that proved to be very beneficial. Our confidence is very high going into Daytona so hopefully that will mean a successful start to the season for Corvette Racing.”

DOUG FEHAN, CORVETTE RACING PROGRAM MANAGER: “Well, 2018 is dawning with some new and exciting things for Corvette Racing and the entire WeatherTech Championship fan base. For the first time, the Roar will actually have some impact on the Rolex 24 as we will be ‘qualifying’ for our pit lane and garage assignments. This can have a direct impact on the race itself when you consider the GTLM margin of victory in 2016 was a scant 0.034 seconds between our two Corvettes. In addition, the Roar will mark the first time for a variety of new machinery, including new cars in GTLM. The 2018 season looks like pretty darn exciting from where we sit.”