Top Five Advantages of Buying a Used car for Racing 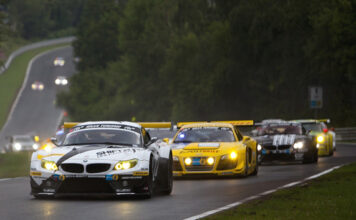 Racing can be an extremely expensive sport especially if you’re in it professionally. You need the best of the best to participate in this illustrious sport. However, the best doesn’t necessarily mean brand new. Used cars such as Mustangs, BMW 3-Series, Porsche 944, Camaros and Porsche Boasters are very popular as racing cars. If’ you’ve been a fan of racing and you’ve watched Formula One events with a ferocity that can be only be matched by the cars on that race track, you probably want to try your hand at racing. You want to be the next Lewis Hamilton, racing down the track at insane speeds.

Now that you have decided to make your dreams a reality by joining the race, the next question would be how? Usually, when a brand new racer wants to start racing they don’t start at the Grand Prix. There are amateur road course races organized by the SCCA (Sports Car Club of America). These races are for people just starting out. One of such categories is the Improved Touring, where cars within the same classification will race together. In this category, you are able to refurbish almost everything concerning the interiors of your car. Although you are not allowed to change or tamper with your internal engine unit that will go against the factory’s blueprint, you are allowed to brush it up till it reaches the specs of factory’s blueprint. Another option would be entering Amateur Drag Racing competitions. These competitions are organized locally. If you want to participate in racing but you’re not sure you can stomach driving that fast, the 24 hours of Lemons is a great choice for you since it’s a test of endurance not necessarily speed. As long as you have a car that cost less than 500 dollars before modifications and safety gadgets, 24 hours of Lemons is open to you.

It is possible for you to participate in these competitions with your normal day to day car. However, due to the fact that racing is rough, it is preferable to buy a used car. Why a used car? Here are five reasons to convince you:

Racing needs a car that can stand some rough handling and a few hits. A car that you can tweak and modify. Using new cars for racing is a risk that is both unnecessary and expensive. With used cars, you are free to take liberties, unlike new cars that will lose their warranty once tampered with. Races that involve extreme situations like Rolly racing and the very popular Derby Demolition. If you’re looking for a great place to buy a used car, check out www.goautocity.com. With a stunning track record that earned them the 2017 and 2018 dealer of the year award, you’re assured of credibility and great cars.

Lisa Mitchell is a San Diego based Auto Financing blogger with many year of experience covered with Car sell/buy in San Diego, Financing and trading Autos. She has started her carrier from Auto City in 2010. Auto City only offers the highest-quality used cars for sale at extremely competitive prices. That special combination of quality and affordability adds up to one thing – real value to you, the customer.