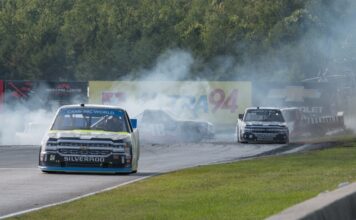 Two Kyle Busch Motorsports teammates, Todd Gilliland and Noah Gragson, were racing for the first and second position on the last lap at Canadian Tire Motorsport Park. Gilliland had worked hard all day to get his truck in position for the win.

After slipping back and dominating most of the race by sweeping two stages, Gragson had slipped back a little after a restart to begin the final stage. However, with a late race caution, the No. 18 driver came back and was running in the second position.

Gragson, who will be is a playoff driver, while Gilliland is not, caught the No. 4 in the final corner on the last lap. Since it was the last lap, all bets were off and with past history, something was going to happen. And that something ended up being, Gragson making a dive bomb move on the inside of Gilliland to try and advance on to the next round. Unfortunately, the move didn’t work out as planned and Gragson ended up taking out his teammate coming to the finish. Both were unable to recover from it and Gragson finished ninth while Gilliland had to settle for 11th after contact was made.

Needless to say after having a shot at the win, Gilliland was not too happy with Gragson after being taken out for his first potential race win.

“He (Noah Gragson) drove through me on the last corner, like we’ve seen in the past 12 years here,” Gilliland told MRN Radio. “That sucks. We had a really fast Frontline Enterprises Toyota Tundra. Can’t thank everyone at KBM. I hate he (Gragson) cost us the 1-2 finish. It’s very frustrating, but we just need to refocus and go get a win next week, and go win the rest of them.”

Gragson, after starting on the front row in second and winning both stages, was disappointed after the contact was made with his teammate Gilliland.

“I was making that move work all through the race,” Gragson told MRN Radio. “Most of the blame is on me. Ultimately, I wasn’t fully there. Todd (Gilliland) was a nose ahead of me, so he claimed the position, but was expecting his spotter to say inside getting into that last corner to his back wheel. That’s part of it. Unfortunately, I hate it for the 4 guys. I wasn’t trying to take him out. I was just trying to race hard, side-by-side to the finish line. Just not a lot of room when it came down to it. Strong Safelite Toyota Tundra. We’ll move to Vegas, but mainly just want to apologize to Todd, the 4 team, and everyone at Kyle Busch Motorsports. That one is on me.”

Gragson wound up finishing ninth and now sits fourth in the playoff standings 24 points above the cut line.

The NASCAR Camping World Truck Series take two weeks off and will head to Las Vegas Motor Speedway for the second race of the Playoffs in the Round of 8.