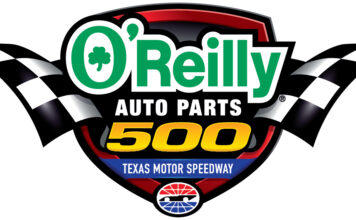 LEADER OF THE PACK:
Seven-time Monster Energy NASCAR Cup Series (MENCS) champion and career-long Chevrolet driver, Jimmie Johnson, is the leader of the pack at Texas Motor Speedway (TMS). Johnson, pilot of the No. 48 Ally Camaro ZL1, has seven wins, 15 top-5’s and 21 top-10 finishes, more than any other in the series.

PACING THE FIELD:
Chevrolet has a long-standing partnership with TMS. Since the first NASCAR Cup race at the 1.5-mile venue in June 1997, Chevrolet has served as the official pace car and truck. This weekend, Chevrolet will lead the field to the green for the 37th Cup Series event with a Kinetic Blue Silverado RST. Eighteen of the 40 MENCS starters will compete race car versions of the Camaro ZL1 production vehicle.

TUNE-IN:
The O’Reilly Auto Parts 500 is scheduled to begin on Sunday, March 31st at 3 pm ET. Live coverage can be found on FOX, PRN, and Sirius XM NASCAR Radio Channel 90.

FOR THE FANS:
Fans can visit the Team Chevy Racing display in the Fan Midway at Texas Motor Speedway near Gate 4

At the Chevrolet Display, fans can view the No. 42 Credit One Camaro ZL1 and No. 9 Mountain Dew Camaro ZL1 show cars

CHASE ELLIOTT, NO. 9 KELLEY BLUE BOOK CAMARO ZL1 – 9th in Standings
A LOT OF PEOPLE ASSUME 1.5-MILE TRACKS ARE ALL THE SAME, BUT WHAT MAKES TEXAS DIFFERENT?
“Well, now it’s very different. Before the repave I thought it was a lot of fun, now the (Turns) 1 and 2 end of the race track is very different from (Turns) 3 and 4 so you just have two different corners basically compared to what you used to have there. That has been the hardest part for us.”

KURT BUSCH, NO. 1 GEARWRENCH CAMARO ZL1 – 10th in Standings
“Texas Motor Speedway is a sister track to where we ran earlier in the season at Las Vegas (Motor Speedway) and with how well we ran there, we’re looking to build on that. However there is much more of an effort that we are putting forth for qualifying. To be comfortable in the draft, to try and play the drafting lane and timing that properly. We are definitely more focused on the Friday attempts. Setups should be pretty close to what we ran at Vegas, it is going to be wide-open through (turns) three and four, while turns one and two will be where the race is won or lost.”

KYLE LARSON, NO. 42 CREDIT ONE BANK CAMARO ZL1 – 11th in Standings
“I think we’re all glad to have survived Martinsville and are looking forward to getting to a type of track where our team has shown some success. Texas has been sort of an up and down place for us in qualifying, but we usually have fast cars for the race. All of the mile and half tracks have their own unique characteristics, but we’ve looked pretty good at the two tracks we’ve been to with the new package, so hopefully that’s the case this weekend in Texas.”

JIMMIE JOHNSON, NO. 48 ALLY CAMARO ZL1 – 15th in Standings
“Martinsville was rough, there is no way around it. We are using these struggles to become stronger, I appreciate my team continuing to dig in. We all want to win. Moving on to Texas, that track is really different these days. With this package I would assume we will have some concerns with turns one and two, and have some off-throttle time and learning how to make the car turn in a tighter radius. Turns three and four are pretty aggressive and there are some bumps so this package should make it interesting.”

ALEX BOWMAN, LLUMAR CAMARO ZL1 – 17th in Standings
“Texas is different and unique because Turn 1 and 2 are so different since the repave. It is so weird, and you don’t even run out to the wall getting into Turn 1. The bottom is a lot shorter at the top. With the newer pavement, it is really edgy.”

AUSTIN DILLON, NO. 3 REALTREE CAMARO ZL1 – 18th in Standings
WITH THE RULES PACKAGE COMPLETELY DIFFERENT THAN WHAT WE HAVE RUN IN THE PAST AT TEXAS MOTOR SPEEDWAY, DO YOU JUST THROW THE NOTEBOOK OUT OR ARE THERE THINGS FROM PREVIOUS YEARS YOU CAN USE THIS WEEKEND? “It’s going to be tough to take the notebook that we’ve run over the last couple of years at Texas Motor Speedway and apply it to the package we are running this weekend, but everything does relate. You can always apply something. The biggest thing is learning the history of the race and how the rubber lays down on the track. We’re always learning a little bit. We’ve worked really hard at RCR during the off-season and our cars have speed. It’s comforting going into a track like Texas Motor Speedway knowing how fast our cars have been so far this year. We just need to string together a solid finish.”

WILLIAM BYRON, NO. 24 AXALTA/PRIMELINE CAMARO ZL1 – 21st in Standings
STATISTICALLY, TEXAS IS ONE OF YOUR BETTER RACE TRACKS. WHAT IS IT ABOUT THAT TRACK THAT KIND OF SUITS YOU?
“I don’t know really, I haven’t really thought about it. I’ve just been there more than most of the other tracks we race at probably. Our cars have been pretty good there for the most part as well. I would say that it’s just really been luck of the draw with the race cars that I’ve had. In Trucks and Xfinity, we ran pretty well and I got a win. I would say it’s just a bit of luck that Texas just suits me. I just like that place and it seems to like me as well.”

HOW HAS THE NEW SURFACE AT TEXAS CHANGED THINGS?
“There is a lot of grip at that race track, so I think with this new package that we are going to have that there is going to be a lot of grip to work with. I’m not really sure what to expect there otherwise. Honestly, I feel like it’s going to be a wild race because there is so much grip and the aero package we have.”

CHRIS BUESCHER, NO. 37 KROGER SPEED UP YOUR CLEANING CAMARO ZL1 – 22nd in Standings
“Since the repave, I have actually enjoyed Texas Motor Speedway quite a bit. We’ve run really well with the new configuration. The track being so different from one end to the other has been a big challenge for us setup-wise. It’s narrow and the asphalt is still very new, and it hasn’t aged yet. We won’t have the passing options that we will have when it gets a little wear on it. With that, it just takes time and you can’t sit idle and let everything fall apart. We have had really fast cars with the old package and if you look at this new one, I think it becomes a matter of how far do you trim out versus how far do you go on the downforce side. It’s a tough one to try and prepare for, but I’m always looking forward to returning home to Texas and having a strong run in our Kroger Speed Up Your Cleanup Camaro ZL1.”

TY DILLON, NO. 13 TWISTED TEA CAMARO ZL1 – 23rd in Standings
“Texas is a difficult track to tackle. You have to find a strange balance with Turns 1 and 2 being so flat and Turns 3 and 4 still being banked with wide-open speeds. It will be interesting to head there with this new package. People want to know what it’s going to be like, and the reality is that we just have no idea how it will behave. But, that’s what has made this season fun and interesting. It’s going to be different week to week, and we are all learning as we go. Our Twisted Tea Camaro ZL1 team has adapted well so far, and hopefully we can keep doing that.”

RYAN PREECE, NO. 47 KROGER CAMARO ZL1 – 25th in Standings
“I’m really looking forward to getting to Texas Motor Speedway this weekend,” Preece said. “We have been building a really strong baseline on our team through the first six races. It’s been a learning curve for me to be able to communicate what I need to the team out of these new racecars with the package for this season. We’ve been continuing to build each week and I think we have a really strong notebook now to grow throughout the season. I know we have speed in our intermediate track program at JTG Daugherty Racing and our teammate has had strong success at Texas Motor Speedway in the last couple of years. The repave and new package are certainly going to throw a curveball at everyone, but we have a lot of good notes from the first couple of 1.5-mile races earlier this season and all we need to do is just continue moving forward.”

BUBBA WALLACE, NO. 43 WORLD WIDE TECHNOLOGY CAMARO ZL1 – 27th in Standings
HOW HAS THE PAVEMENT CHANGED TEXAS? DO YOU FEEL LIKE IT’S A WHOLE DIFFERENT PLACE?
“It is. It’s not the Texas Motor Speedway anymore that I started racing on. It is super-fast. I like the feeling of speed, obviously, I am in this sport for a reason – and in Turn 3 and Turn 4 you are hanging on for dear life. We are going to be wide-open there with this package. There are no other grooves. It’s just one groove, and is really hard to pass. It comes with age, I guess, for the track to wear out. It needed a repave because the rain delays were horrendous. So, Atlanta (Motor Speedway) is the last one hanging on. They continue patching up to try to save the asphalt, but in-time it calls for a new repave. It’s just unfortunate the way that place used to race. There was five, or six grooves, all the way from the yellow line to the fence you could race anywhere. That was always fun.”