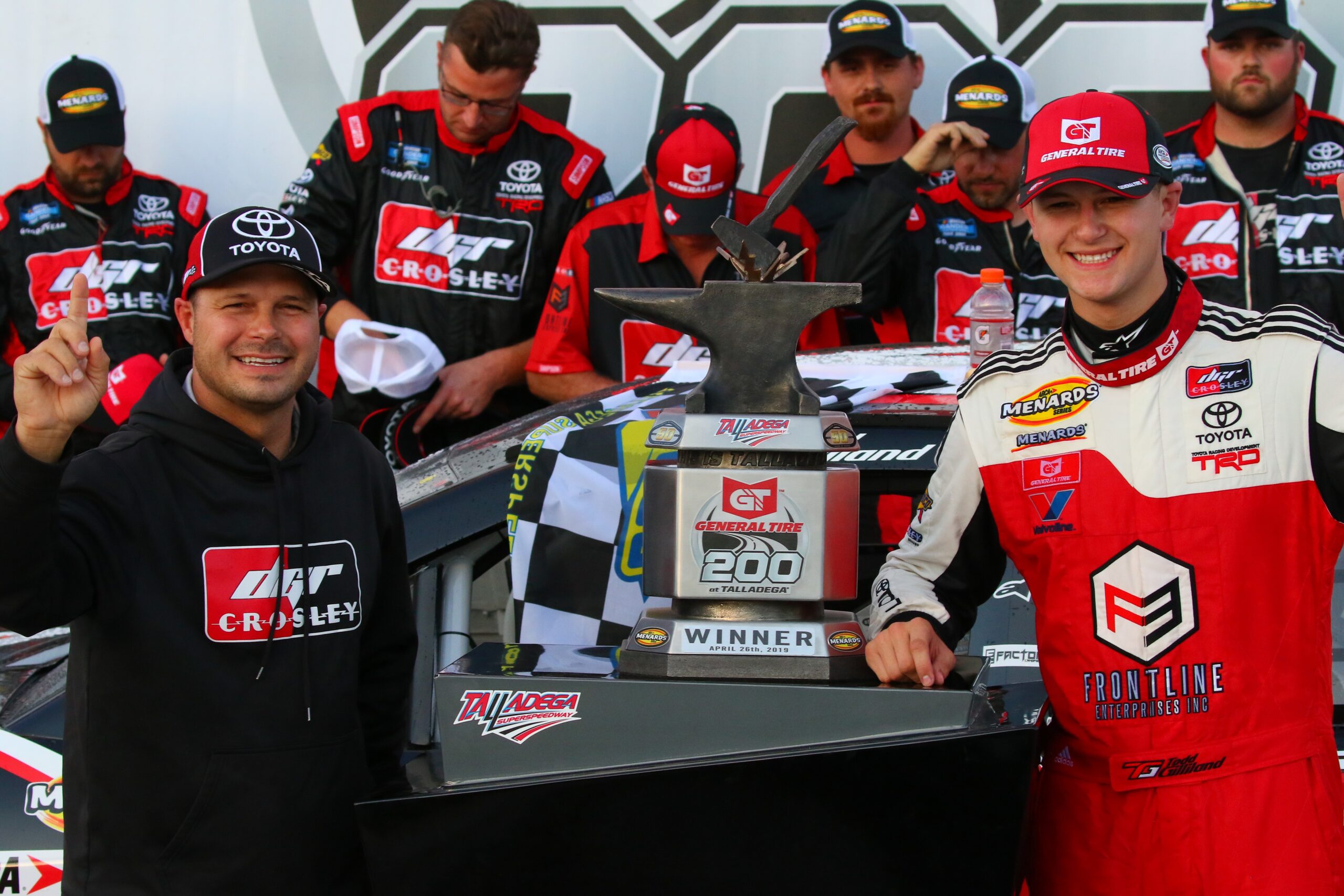 NASCAR Gander Outdoors Truck Series regular and part-time ARCA driver Todd Gilliland drove the No. 4 DGR-CROSLEY Toyota into victory lane at Talladega Superspeedway Friday evening after dominating the last half of the race.

“That was incredible,” Gilliland told FOX Sports 1. “All around such an amazing race. You know being back with DGR-Crosley, car was incredible. They couldn’t catch me doing all they could. Gotta thank Frontline Enterprises, Toyota obviously, Menards for the series and General Tire for the tire.”

“All the credit to these guys, that was incredible. We were going to destroy them at Daytona. I’m so happy I got to come back here, it was kind of last minute. It’s been a long time since I won and this car is amazing, so I’m just super pumped!”

In what was a relatively clean and unusual race at Talladega for the ARCA Menards Series, there wasn’t that much action to begin with.

Venturini Motorsports continued their dominance in qualifying this year by sitting on the pole again with driver Brandon Lynn. It was the organization’s fourth consecutive pole award this year. However, the Venturini’s were still looking for that first elusive win on a track that surprisingly, they had not won at yet.

It was clean and green from the get-go. There was a single file line that broke out in front and it saw longtime ARCA competitor Sean Corr lead the way after moving up to first place on Lap 6.

There were a few close calls early on. Joe Graf Jr. accidentally got Michael Self sideways, but Self was able to hang on to the car without crashing. On Lap 10, former ARCA Talladega winner Brandon McReynolds came down pit road for an unscheduled pit stop. The report was that he had no oil pressure, but the team, later on, was able to get it back up to speed.

On Lap 30, Natalie Decker was off the pace with a fuel pickup problem, ending her chance at a win early.

The first major incident of the day took place right after halfway on Lap 41 when Thad Moffitt lost control of his car and got into Christian Eckes, sending Eckes up into the track and making hard contact with the wall. This ended Eckes day early, who was back from his illness at Salem.

Previous race leader Sean Corr slid his tires coming to pit road prior to the caution coming out, and he had to come back in to change all four tires. Ultimately, Corr could never rebound to get back into the lead.

Another caution and presumably the final one, came out with 25 to go for Tommy Vigh Jr, who hit the wall hard on the front stretch. Vigh Jr. was not injured from the accident.

After that, the ARCA Menards Series fans saw Todd Gilliland in the lead for the first time prior to the caution with 25 to go. The race went back green with 20 to go and surprisingly enough, it remained green for the rest of the way and saw no major incidents.

As the checkered flag flew on Lap 76, the leaderboard showed Gilliland as the race winner of the General Tire 200.

It has been a tough year so far for Gilliland, who has faced critical comments from his boss owner Kyle Busch, but he found a way to take some of the pressure off.

“Absolutely,” Gilliland told FOX Sports 1. “No matter how small or big the victory, it’s huge. My confidence has never been lower heading into this race, but I have so much confidence in these guys. I need to work on my Truck program myself and my whole team. That’s what it’s all about is teamwork. Now I just need to win a Truck race or a few of them as they are way more important.”

The ARCA Menards Series heads to Nashville on Friday May 3.