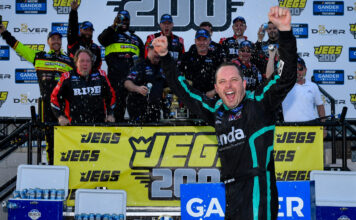 DOVER, Del. (May 3, 2019) – When Johnny Sauter couldn’t refire his engine during an attempt to save fuel during Friday’s “JEGS 200” NASCAR Gander Outdoors Truck Series race, he had a few choice words to share with his team.

As the sun faded over the Monster Mile’s backstretch, however, the only sounds coming from Sunoco Victory Lane were whoops of celebration as Sauter’s No. 13 Ford team with ThorSport Racing emerged with its first victory of the season and earned the first golden Monster Trophy of Dover International Speedway’s 50th Anniversary celebration in 2019.

Sauter held off Brett Moffitt on a restart with five laps left and clinched his third straight NASCAR Gander Outdoors Truck Series victory at the Monster Mile with an average speed of 107.431 mph, completing the 200 laps in 1:51:42.

“I just love it here,” Sauter said. “People ask me all the time what my favorite race track is, I always come back to the Monster Mile. We’ve been able to work the second groove and make some moves and make some passes. When you have more room to race, it’s more fun. This is one of the biggest victories of my career.”

The only hiccup for Sauter came following his Stage Two win, when he was trying to save fuel to help with his team’s final pit stop. In between turning the ignition off and on again, the motor failed to fire.

“I’m not exactly sure what happened,” Sauter said. “We were saving fuel and shutting the ignition off but I couldn’t get it to crank. You just have to stay focused.”

Sauter recovered and took the lead for good with 30 laps left and topped Moffitt by 0.603 seconds at the checkered flag. Rookie Harrison Burton was third, followed by points leader Grant Enfinger in fourth and Matt Crafton in fifth.

“We still have work to do but I think we’ll be strong heading to the end of the season,” Sauter’s crew chief Joe Shear Jr. said.

Moffitt led a race-high 81 laps, followed by rookie Sheldon Creed with 59 and Sauter with 43. Creed had his day end early when he spun out on the backstretch on Lap 160, bringing out one of the race’s six caution flags, which consumed 35 laps.

Earlier on Friday, Moffitt established a track record for NASCAR Gander Outdoors Truck Series qualifying at Dover with an average lap speed of 161.413 mph (22.303 seconds), besting the old mark by more than 2 mph.

Keep up to date on all 50th Anniversary announcements and schedules by visiting DoverSpeedway.com or calling (800) 441-RACE. You can also follow our social media channels at Facebook.com/DoverInternationalSpeedway, or on Twitter and Instagram at @MonsterMile.