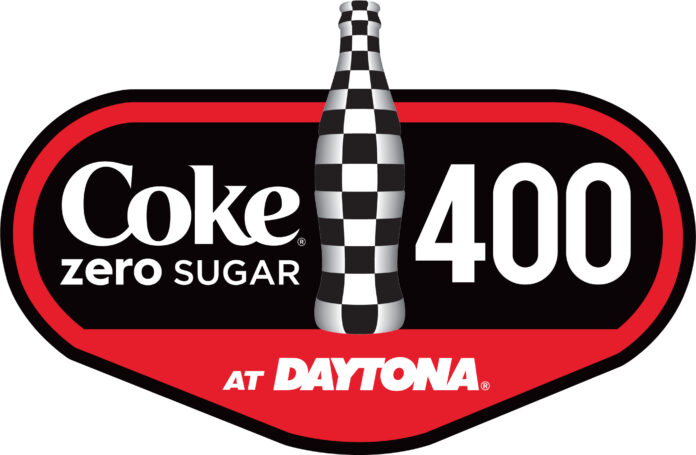 JUSTIN HALEY, NO. 34 FRATERNAL ORDER OF EAGLES CAMARO ZL1 – Race Winner:
YOU ARE A MONSTER ENERGY NASCAR CUP SERIES WINNER. CAN YOU BELIEVE IT?
“It’s absolutely a blessing. Its pretty incredible that I have so many great people around me that have given me this opportunity to come here to this level and stage that we are performing on. Obviously Todd and my family have done a great job, but the Fraternal Order of Eagles has given me this opportunity with Spire Motorsports and its truly a blessing. I never even saw myself running a Cup race until I got a call a few months ago to do Talladega. It’s just unreal and I don’t know how to put it. I don’t know how to feel.”

DID YOU EVER DREAM YOU WOULD RACE ON THIS LEVEL, MUCH LESS WIN HERE?
“No. Absolutely not. The stars aligned and I didn’t ever think I was going to get redemption back from a few years back in Daytona, and last year when I got the Xfinity win taken away from me. So, to come back and get redemption in the Cup Series is pretty cool and makes that second place finish with Kaulig last Friday a lot better.”

“I want to thank Spire Motorsports for giving me this opportunity and also the Fraternal Order of Eagles. This is my third Cup start. Talladega was supposed to be my debut but it didn’t quite go our way. So, we were kind of running around in the back there just trying to stay out of trouble. I saw lightning. I’ve never been too lucky at Daytona. It’s pretty good to be in first.”

THE CARS LOOK LIKE THEY ARE A HANDFUL
‘Yeah, they are. It’s super loose. With the Xfinity cars, they were pretty easy to drive, but it was a lot cooler at night. So, it’s hot and slick out there. It’s just super-hard to hang on to them. I was having to lift. I couldn’t run wide-open on the track or I’d spin out. A lot of car control here at Daytona. And, you really don’t think you should have to, but this package fits that as well.”

WILLIAM BYRON, NO. 24 AXALTA PATRIOTIC CAMARO ZL1 – Finished 2nd
“It took us a little while to get to the front from the back and finish second. So that was good.”

THIS IS YOUR BEST CAREER FINISH
“Yeah, you’re up and down a lot here. it would have been cool to win, for sure. But, it would have been a really weird way to win. So, I’m glad that we got the day out of it that we did. I would have liked to go back racing and win it the way I wanted to, but our team did a great job this week managing all the chaos and finishing second with a back-up car is pretty good. Overall it was a good race for us.”

WOULD YOU SAY IT WAS SUCCESSFUL FOR ALL OF CHEVROLET WORKING TOGETHER TODAY?
‘Yeah, it was really successful. All of us worked really well together and I feel like that’s what got us to a second place position. It was great.”

JIMMIE JOHNSON, NO. 48 ALLY CAMARO ZL1 – Finished 3rd
“These Ally crew members on this No. 28 Ally team have been working really hard. I think we’re really starting to get our stride as a group now.”

YOU HAD A SOLID FINISH UP UNTIL THEY RED-FLAGGED THE RACE. WHAT DID YOU THINK YOU COULD GET FROM THERE?
“You never know. A lot of the aggressive drivers and the strength of the pack was so different. If it did go back to green, I think there was only a handful of cars that were still in good shape. We were certainly willing to do everything we could to get a Hendrick car to Victory Lane, but it is what it is. The race has been called and we’ll take the third place points and head home.”

HOW DO YOU THINK THE CHEVROLETS WORKED TOGETHER?
“We did good. It’s hard to predict every scenario. It’s hard to put everybody together and hard to manage. We had to stay very disciplined in the car but I think in general, I netted a better finish as a result in working closely with my Chevrolet teammates.”

ON THE MULTI-CAR CRASH:
“We had a bunch of Chevys on the bottom. As we entered Turn 1 I saw the door number on the No. 3 car (Austin Dillon), and I knew things were going down. William (Byron) did a nice job of moving to the top in front of me. A couple of cars disappeared in front of me. And the spinning cars on the outside took out the No. 88 (Alex Bowman) behind me. I was just in a very fortunate position on track and drove through and out without a scratch.”

ON THE CHEVY PLAN: “It’s been working well. We are still learning how to use each other in the right way and protect as many lanes as possible. We are all committed to the bottom and the bottom seems to prevail some how which is surprising. In the car, it doesn’t feel like that is what is going to work out. But so far it has. So, hats off everyone in the Chevy camp. We are working really well together. My Ally Chevy has been very strong. And I am sitting in a good spot. I hope we go back racing because today is my oldest daughter’s birthday and we are supposed to be fly-fishing. I’m sorry Sweetie – maybe I can bring you a trophy back.”

ON THE CARS: “Everyone one is getting comfortable with the fact that deeper in the traffic there is less air. We ran front row from the front row to the last row. I think everyone is driving well and being smart but it’s not easy.

TY DILLON, NO. 13 GEICO MILITARY CAMARO ZL1 – Finished 4th
“We didn’t have a chance to race for the win but this was a first top-five and best finish ever and I’m pretty pleased with that. I’m thrilled for our Germain Racing Team. It’s a nice little shot in the arm for our team to get the second half of the season going. There has been a little bit of disappointment the last couple of weeks. So, to be able to have a good finish is going to catapult us in the second half of the season. And hopefully we continue to build off that momentum. I’m proud of our effort today. Sometimes it just seems to work out.”

ON THE TEAM CHEVY EFFORT
“I think there is just great leadership at the top at Chevy that got us all together and that we had a game plan before we got to the race track the led us to being successful today as far as keeping our Camaros up front and keeping speed in the cars.”

KURT BUSCH, NO. 1 GLOBAL POKER CAMARO ZL1 – Finished 10th
YOU NEVER GOT TO HAVE A RE-START. DO YOU FEEL LIKE YOU’VE BEEN SNAKE-BIT?
“I feel like we were in a really good position to win the race and it’s just a matter of when the one random lightning bolt comes down to decide when you make the call. It was a judgment call on their part.

DO YOU FEEL NASCAR SHOULD OR COULD HAVE DONE ANYTHING DIFFERENTLY?
“Oh, we could have started the race at 11 am (laughter) and got a full race in.”

WHAT WERE YOU THINKING WHEN THE FIRST LIGHTNING BOLT HIT? DID YOU THINK NASCAR COULD GET THE RACE RESTARTED OR DID YOU HAVE ONE OF THOSE ‘THIS JUST WASN’T MEANT TO BE’ DAYS?
“Oh, they had to make a judgment all and they made a judgment call.”

IT WAS AN EVENTFUL DAY WITH A LOT OF ACTION
“Yeah, I think we did pretty good to finish tenth considering everything that went on.”

DID YOU FEEL LIKE THERE WAS A LOT OF AGGRESSIVENESS DURING THE RACE OR WAS IT TYPICAL WITH THE MANUFACTURERS RUNNING TOGETHER? OR, WAS IT MORE DIFFICULT?
“It was a different race because the manufacturers were working together and then the handling aspect. At Talladega you could hold it wide open pretty easy. At Daytona you’re slipping and sliding and you’re trying to stay teamed-up with the guys that you want to be with. So, today was definitely more challenging.’

AUSTIN DILLON, NO. 3 AMERICAN ETHANOL CAMARO ZL1 – Involved in a multiple-car crash on Lap 118 – Finished 33rd
ITS HARD TO SEE IF YOU HAD BEEN CLEARED, WHAT EXACTLY HAPPENED AUSTIN?
“Originally, off of turn four, I thought me and the 9 would be able to get by the 11. But the 9 wasn’t clear. I really thought it was urgent with the lighting and the rain coming. So I jumped up there and had a good push from the 14 and my plan as soon as I cleared the 11 was to cut left and get down again to get with my Chevy teammates. It’s really unfortunate because I had a really fast American Ethanol Chevy. It was cool to win the Stage. Just trying to get a race win. That is all it is. I got turned a little bit left when he went left and it kind of shot me down there and I just kept coming left. I mean, its part of this kind of racing. I was being aggressive and trying to keep the lead, and that is what you get, its part of it. I just thought I would try and keep it up front. We had a fast car and I am really proud of the guys. Hate it went that way and wished we could have worked with the Chevys to finish off what we started.”

CHASE ELLIOTT, NO. 9 NAPA BATTERIES CAMARO ZL1 – Involved in a multiple-car crash on Lap 118 – Finished 35th
WHAT DID YOU SEE THERE?
“I was just kind of on the bottom pushing along there and I saw Austin get turned around. You just hope you can get left enough, and slowed down enough, to miss it. It’s unfortunate because I thought our NAPA Camaro ZL1 was one of the best ones we have had down here. It’s unfortunate and I hate that happened because I felt like we were doing a pretty good job as a group. Just needed to keep it going.”