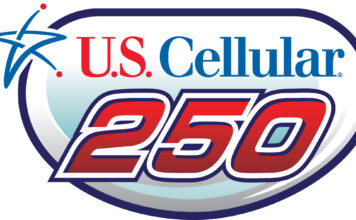 Michael Annett
No. 1 TMC Transportation Chevrolet
• Michael Annett’s best NASCAR Xfinity Series finish at his home track in Iowa is fourth, coming in 2012.
• Annett returns to Iowa Speedway with seven top-10 finishes and three in the top five in his last nine NASCAR Xfinity Series starts. He was ninth at Iowa last month.
• On tracks measuring 1.058 miles or less, Annett has four top-10 finishes in six starts for an average of 9.8 this season.
• As it did in June, Annett’s No. 1 Chevrolet Camaro SS will carry the unique paint scheme of TMC Transportation, which is based in Des Moines, Iowa.

Justin Allgaier
No. 7 U.S. Cellular Chevrolet
• Justin Allgaier has 15 NXS starts at Iowa, accumulating one win (June 2018), four top fives and 11 top 10s.
• In his last three starts at the Iowa track, the Illinois native has never finished lower than third.
• Allgaier has led more laps at Iowa Speedway (449) than at any other track on the circuit.
• The 33-year-old driver moved up to fourth in the NXS point standings after his third-place run at New Hampshire Motor Speedway last weekend.
• This weekend, Allgaier and the No. 7 team will carry the colors of U.S. Cellular on their Camaro.

Zane Smith
No. 8 PatientPop Chevrolet
• Zane Smith returns to JRM’s No. 8 Chevrolet for the seventh time in 2019 this weekend at Iowa.
• Smith earned a fifth-place finish in the first NXS event at Iowa back in June. In six starts for the team this season, Smith has tallied one top five and three top 10s.
• Smith has two starts at the .875-mile oval in the ARCA Menards Series, with a best finish of fourth in 2018.
• PatientPop, a Santa Monica, Calif.-based company providing a complete practice growth platform that delivers measurable improvements for medical providers, returns to the No. 8 as primary partner for the third time this season.

Noah Gragson
No. 9 Switch Chevrolet
• Noah Gragson will make his second NXS start at Iowa this weekend.
• Gragson recorded a sixth-place finish in his lone NXS start at the Iowa short track earlier this season.
• The Las Vegas native has earned one top five, two top 10s and one pole position in two previous starts in the NASCAR Gander Outdoors Truck Series at Iowa, with a best finish of second coming in 2018.
• Gragson has also made three previous starts in the NASCAR K&N Pro Series West at Iowa, recording two top fives and three top 10s.

“We tried some things last week at New Hampshire to get ready for the return to Iowa, and I think we’ll have a sporty TMC Chevrolet this weekend at my home track. It’s always good to be home, and we’ve been pretty good on tracks under a mile this year. Travis (Mack, crew chief) and the No. 1 team have been really good at getting us prepared for these races, and we’re coming in with the idea that we’re going to make some noise this weekend.”– Michael Annett

“Last time we went to Iowa it was a bit of a challenge because we got very little practice. When we started the race, we had a lot of work to do, but the guys did a fantastic job and we made huge gains throughout the race. Now that we’ve had some time to digest that race, I feel like we can go there again and be a lot closer off the truck with our U.S. Cellular Camaro.”– Justin Allgaier

“I’m really looking forward to getting back behind the wheel of the No. 8 Chevrolet this weekend in Iowa. I was able to get my first top-five here in June and I know that Taylor (Moyer, crew chief) and I have a really good game plan heading in to practice on Friday. It’s also awesome to have PatientPop come back onboard. Hopefully we can give them another great run on Saturday night.” – Zane Smith

“We had a really good Switch Chevrolet back in June in Iowa, despite not getting to have a whole lot of practice with the weather. But based off of how we ran I for sure have confidence that we can unload with that same speed again this weekend and continue to build off of what we learned a few weeks ago. Iowa is one of my favorite tracks that we go to and it is definitely somewhere that we can keep this positive momentum going at.” – Noah Gragson

• JRM at Iowa: In 54 NXS starts at Iowa Speedway, JR Motorsports has earned three victories, 14 top fives and 32 top 10s. Brad Keselowski scored the organization’s first victory at the .875-mile oval in the inaugural event in 2009, with William Byron and Justin Allgaier going to Victory Lane in June of 2017 and 2018, respectively.
• Newton Cares Classic Golf Tournament: JRM teammates Michael Annett and Noah Gragson will be participating in the inaugural Newton Cares Best Shot Golf Tournament at the Westwood Golf Course on Thursday, July 25. This event is aimed at raising funds for non-profits in Jasper County and central Iowa and is a collaborative effort among Iowa Speedway, United Way of Jasper County and the City of Newton.
• Annett Media Availability: JRM driver and Iowa native Michael Annett will be stopping by the media center at Iowa Speedway for media availability on Friday, July 26, at 2 p.m. CST.